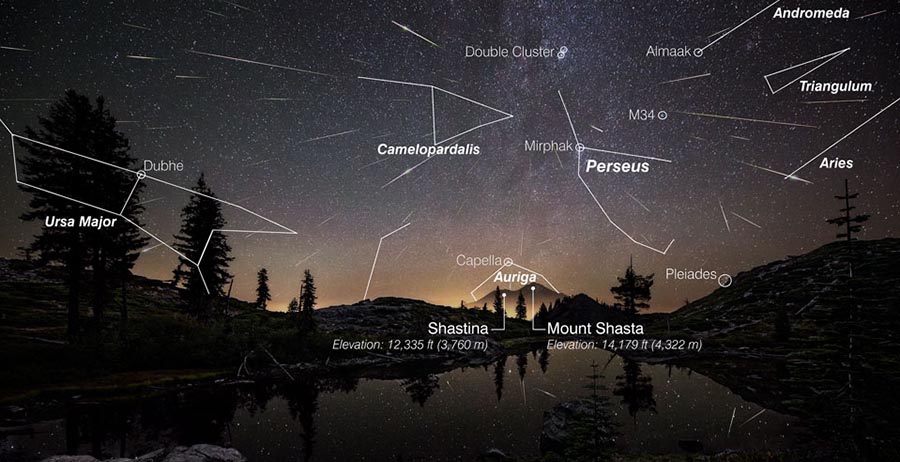 A meteor shower, some of which are known as a "meteor storm", "meteor outburst", or "shooting star", is a celestial event where a group of meteors are observed to radiate from one point in the sky. These meteors are small fragments of cosmic debris entering Earth's atmosphere at extremely high speed. They vaporize due to friction with the air, leaving a streak of light that very quickly disappears. For bodies with a size scale larger than the atmospheric mean free path (10 cm to several metres) this visible light is due to the heat produced by the ram pressure (not friction, as is commonly assumed) of atmospheric entry. Most of the small fragments of cosmic debris are smaller than a grain of sand, so almost all fragments disintegrate and never hit the earth's surface. Fragments which do contact Earth's surface are called meteorites.

A meteor shower is the result of an interaction between a planet (Earth in our case) and a comet. Comets are like "dirty snowballs" made up of ice and rock, orbiting the Sun. Each time a comet swings by the Sun in its orbit, some of its ice or other volatile vapourises and a certain amount of debris, or cometary fragments, may be shed. As the debris streams from the comet, it forms the comet's visible tail. The solid pieces of debris are a form of meteoroid. The meteoroids spread out along the entire orbit of the comet to form a meteoroid "stream". As the Earth orbits the Sun, its orbit sometimes takes us through a meteoroid stream and a meteor shower ensues. The meteoroids encounter Earth's atmosphere at high speed. As the meteoroids streak through the atmosphere, ram pressure causes the particles to burn and incandesce, forming meteors. When the meteoroid stream is particularly dense, we occasionally see a spectacular "meteor storm." The comets that spawn most known meteor showers have been identified.

Irish astronomer George Johnstone Stoney (1826-1911), collaborating with British astronomer Arthur Matthew Weld Downing (1850-1917), and independently Adolf Berberich of the Konigliches Astronomisches Rechen Institut (Royal Astronomical Computation Institute) in Berlin, Germany, had apparently first offered in the 1890s the idea of a meteoroid stream or trail, when they calculated how meteroids, once freed from the comet and traveling at low speeds relative to the comet, would drift mostly in front of or behind the comet after completing one orbit. The effect is simple orbital mechanics - the material drifts only a little laterally away from the comet while drifting ahead or behind the comet because some particles make a wider orbit than others. These dust trails are sometimes observed in comet images taken at mid infrared wavelengths (heat radiation), where dust particles from the previous return to the Sun are spread along the orbit of the comet.

The gravitational pull of the planets determines where the dust trail would pass by Earth orbit, much like a gardener directing a hose to water a distant plant. Most years, those trails would miss the Earth altogether, but in some years the Earth is showered by meteors. In 1985, E. D. Kondrat'eva and E. A. Reznikov of Kazan State University first correctly identified the years when dust was released responsible for several past Leonid meteor storms. In anticipation of the 1999 Leonid storm, Robert H. McNaught and David Asher, and Esko Lyytinen of Finland, were first to apply this method in the West. Peter Jenniskens has published predictions for future dust trail encounters, resulting in a "meteor storm" or "meteor outburst", for the next 50 years.

Over longer periods of time, the dust trails can evolve in complicated ways. One effect is that the orbits of some repeating comets, and meteoroids leaving them, are in resonant orbits with Jupiter or one of the other large planets - so many revolutions of one will equal another number of revolutions of the other. So over time since Jupiter will have the same relative position intermittently and it will tend to pull meteoroids into keeping that relative position. This creates a shower component called a "filament".

A second effect is a close encounter with a planet. When the meteoroids pass by Earth, some are accelerated (making wider orbits), others are decelerated (making shorter orbits), resulting in gaps in the dust trail in the next return (like opening a curtain, with grains piling up at the beginning and end of the gap). Also, Jupiter's perturbation can change sections of the dust trail dramatically, especially for short period comets, when the grains approach the big planet at their furthest point along the orbit around the Sun, moving most slowly. As a result, the trail has a clumping, a braiding or a tangling of crescents, of each individual release of material.

The third effect is that of radiation pressure which will push less massive particles into orbits further from the sun - while more massive objects (responsible for bolides or fireballs) will tend to be affected less by radiation pressure. This makes some dust trail encounters rich in bright meteors, others rich in faint meteors. Over time, these effects disperse the meteoroids and create a broader stream. The meteors we see from these streams are part of annual showers, because Earth encounters those streams every year at much the same rate.

When the meteoroids collide with other meteoroids in the zodiacal cloud, they lose their stream association and become part of the "sporadic meteors" background. Long since dispersed from any stream or trail, they form isolated meteors, not a part of any shower. These random meteors will not appear to come from the radiant of the main shower.

Meteor showers originate from fixed points in the sky. Because meteor shower particles are all traveling in parallel paths, and at the same velocity, they will all appear to an observer below to radiate away from a single point among the constellations. This radiant point is caused by the effect of perspective, similar to railroad tracks converging at a single vanishing point on the horizon when viewed from the middle of the tracks. Meteor showers are almost always named after the constellation from which the meteors appear to originate. This "fixed point" slowly moves across the sky during the night due to the Earth turning on its axis, the same reason the stars appear to slowly march across the sky. The radiant also moves slightly from night to night against the background stars (radiant drift) due to the Earth moving in its orbit around the sun. See "IMO" Meteor Shower Calendar 2007(International Meteor Organization) for maps of drifting "fixed points".

The most visible meteor shower in most years are the Perseids, which peak on August 12th of each year at over 1 meteor a minute. The most spectacular meteor shower is probably the Leonids, the King of Meteor Showers. Approximately every 33 years the Leonid shower produces a "meteor storm" with hundreds of thousands of meteors per hour. These Leonid storms gave birth to the term "meteor shower" since most meteor showers produce only a few meteors per hour, rarely producing as many as one meteor every 30 seconds. The last two massive Leonid storms were in 1933 and 1966. The anticipated storm of 1999 was much less spectacular. When the Leonid shower is not storming it is less active than the Perseids. Read more ...

Explanation: Where are all of these meteors coming from? In terms of direction on the sky, the pointed answer is the constellation of Perseus. That is why the meteor shower that peaks later this week is known as the Perseids -- the meteors all appear to came from a radiant toward Perseus. In terms of parent body, though, the sand-sized debris that makes up the Perseids meteors come from Comet Swift-Tuttle. The comet follows a well-defined orbit around our Sun, and the part of the orbit that approaches Earth is superposed in front of the Perseus. Therefore, when Earth crosses this orbit, the radiant point of falling debris appears in Perseus. Featured here, a composite image containing over 60 meteors from last August's Pereids meteor shower shows many bright meteors that streaked over Mount Shasta, California, USA. This year's Perseids holds promise to be the best meteor shower of the year. Mt. Shasta

Any other solar system body with a reasonably transparent atmosphere can also have meteor showers. For instance, Mars is known to have meteor showers, although these are different from the ones seen on Earth because the different orbits of Mars and Earth intersect orbits of comets in different ways. Because of the similar air pressure at altitudes for meteors only the relatively slower motion because of increased distance from the sun should marginally decrease meteor brightness.

On March 7, 2004, the panoramic camera on Mars Exploration Rover Spirit recorded a streak which is now believed to have been caused by a meteor from a Martian meteor shower associated with comet 114P/Wiseman-Skiff.