Mesoamerica or Meso-America (Spanish: Mesoamerica) is a region and culture area in the Americas, extending approximately from central Mexico to Honduras and Nicaragua, within which a number of pre-Columbian societies flourished before the Spanish colonization of the Americas in the 15th and 16th centuries.

Prehistoric groups in this area are characterized by agricultural villages and large ceremonial and politico-religious capitals This culture area included some of the most complex and advanced cultures of the Americas, including the Olmec, Teotihuacan, the Maya, and the Aztec.

The term Mesoamerica - literally, "middle America" in Greek - was first used by the German ethnologist Paul Kirchhoff, who noted that similarities existed among the various pre-Columbian cultures within the region that included southern Mexico, Guatemala, Belize, El Salvador, western Honduras, and the Pacific lowlands of Nicaragua and northwestern Costa Rica. In the tradition of cultural-history, the prevalent archaeological theory of the early to middle 20th century, Kirchhoff defined this zone as a culture area based on a suite of interrelated cultural similarities brought about by millennia of inter- and intra-regional interaction (i.e., diffusion).

These included sedentism, agriculture (specifically a reliance on the cultivation of maize), the use of two different calendars (a 260 day ritual calendar and a 365 day calendar based on the solar year), a base 20 (vigesimal) number system, pictographic and hieroglyphic writing systems, the practice of various forms of sacrifice, and a complex of shared ideological concepts. Mesoamerica has also been shown to be a linguistic area defined by a number of grammatical traits that have spread through the area by diffusion.

Mesoamerica is recognized as a near-prototypical cultural area and the term is now fully integrated in the standard terminology of pre-Columbian anthropological studies. Conversely, the sister terms Aridoamerica and Oasisamerica, which refer to northern Mexico and the western United States, respectively, have not entered into widespread usage.

Unrelated to the archaeological and ethnohistorical usage, the term may also be used to refer to a modern economic territory designated the Mesoamerican region (MAR), which comprises the countries of Central America and nine southeastern states of Mexico.

Mesoamerican astronomy included a broad understanding of the cycles of planets and other celestial bodies. Special importance was given to the sun, moon, and Venus as the morning and evening star.

Observatories were built at a number of sites, including the round observatory at Ceibal and the 'Observatorio' at Xochicalco. Often, the architectural organization of Mesoamerican sites was based on precise calculations derived from astronomical observations. Well-known examples of these include the El Castillo pyramid at Chichen Itza and the Observatorio at Xochicalco. A unique and common architectural complex found among many Mesoamerican sites are E-Groups, which are aligned so as to serve as astronomical observatories. The name of this complex is based on UaxactunŐs Group E, the first known observatory in the Maya area. Perhaps the earliest observatory documented in Mesoamerica is that of the Monte Alto culture. This complex consisted of 3 plain stelae and a temple oriented with respect to the Pleiades.


The Symbolism of Space and Time

It has been argued that among Mesoamerican societies the concepts of space and time are associated with the four cardinal compass points and linked together by the calendar (Duverger 1999). Dates or events were always tied to a compass direction, and the calendar specified the symbolic geographical characteristic peculiar to that period. Resulting from the significance held by the cardinal directions, many Mesoamerican architectural features, if not entire settlements, were planned and oriented with respect to directionality.

In Maya mythology, each cardinal point was assigned a specific color and a specific jaguar deity (Bacab). They are as follows:

Later cultures such as the Kaqchikel and K'iche' maintain the association of cardinal directions with each color, but utilized different names.

Mesoamerican artistic expression was conditioned by ideology and generally related to focusing on themes of religion and/or sociopolitical power. This is largely based on the fact that most works that survived the Spanish conquest were public monuments.

These monuments were typically erected by rulers who sought to visually legitimize their sociocultural and political position; by doing so, they intertwined their lineage, personal attributes and achievements, and legacy with religious concepts. As such, these monuments were specifically designed for public display and took many forms, including stele, sculpture, architectural reliefs, and other types of architectural elements (e.g., roofcombs).

Other themes expressed include tracking time, glorifying the city, and veneration of the gods - all of which were tied into explicitly aggrandizing the abilities and the reign of the ruler who commissioned the artwork.

Another type of pre-Hispanic art that was produced for its inner, rather than outward, meaning. It is differentiated from the first type in that its value is related not so much in what is visually depicts, but rather in what it represents. Earthenware (ceramic vessels) are an example of this type of artistic expression, and were symbolic due to the origin of their source material; they were often in burial rituals and as the invisible faces of statues.


The history of human occupation in Mesoamerica is divided among a number of stages or periods. These are known, with slight variation depending on region, as the Paleo-Indian, the Archaic, the Preclassic (or Formative), the Classic, and the Postclassic. The last three periods, representing the core of Mesoamerican cultural fluorescence, are further divided into two or three sub-phases. Most of the time following the arrival of the Spanish in the 16th century is lumped into the Colonial period.

The differentiation of early periods (i.e., up through the end of the Late Preclassic) generally reflects different configurations of socio-cultural organization that are characterized by increasing socio-political complexity, the adoption of new and different subsistence strategies, and changes in economic organization (including increased interregional interaction). The Classic period through the Postclassic are differentiated by the cyclical crystallization and fragmentation of the various political entities throughout Mesoamerica. Chronology and Culture 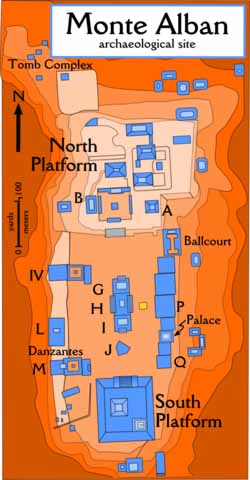 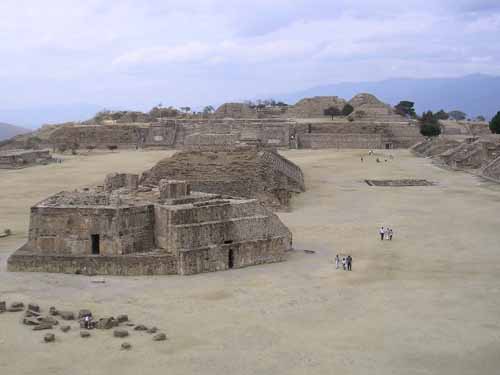 Monte Alban is a large pre-Columbian archaeological site in the southern Mexican state of Oaxaca and is one of the earliest cities of Mesoamerica. The civic ceremonial center of the Monte Alb‡n site is situated atop an artificially leveled ridge, which with an elevation of about 1,940 m (6,400 ft) above mean sea level rises some 400 m (1,300 ft) from the valley floor. How this site was developed remains a mystery, and, like many unexplained ancient megalithic sites scattered throughout the world, and perhaps linked, is an enigma leading many researchers to conclude that it was a landing strip for ancient astronauts much like the Nazca Desert. 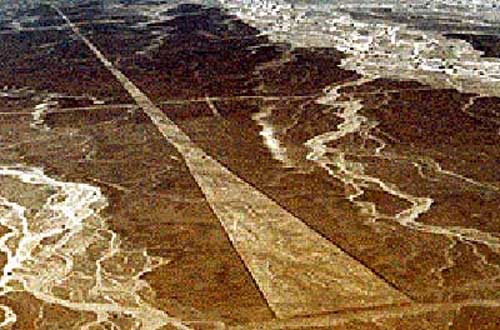 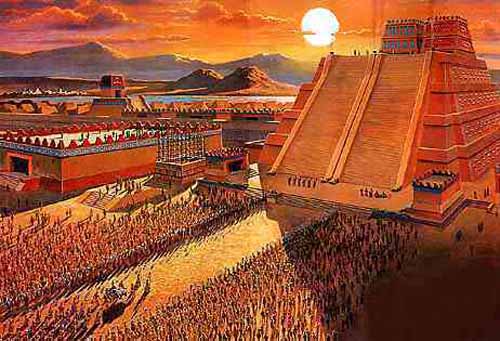