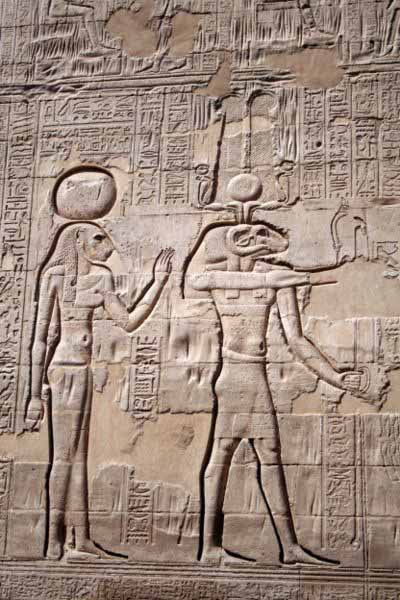 In Egyptian mythology, Menhit (also spelt Menchit) was originally a foreign war goddess. Her name depicts a warrior status, as it means (she who) massacres.

When included among the Egyptian deities, she became the female counterpart of Anhur. It was said that she had come from Nubia with Anhur who had been her counterpart and husband there.

Due to the aggressive attributes possessed by and hunting methods used by lionesses, most things connected to warfare in Egypt were depicted as leonine, and Menhit was no exception, being depicted as a lioness-goddess.

She also was believed to advance ahead of the Egyptian armies and cut down their enemies with fiery arrows, similar to other war deities.

In the 3rd Nome of Upper Egypt, particularly at Esna, Menhit was said to be the wife of Khnum and the mother of Heka.

As the centre of her cult was toward the southern border of Egypt, in Upper Egypt, she became strongly identified with Sekhmet, who was originally the lion-goddess of war for Upper Egypt, after unification of the two Egyptian kingdoms, this goddess began to be considered simply another aspect of Sekhmet.