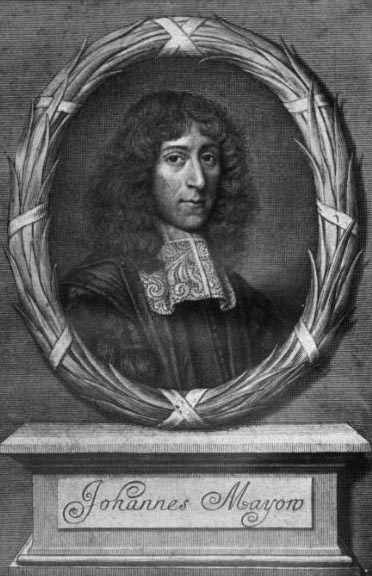 John Mayow (May, 1643 - September, 1679), English chemist and physiologist, was born in London. At the age of fifteen he went up to Wadham College, Oxford, of which he became a scholar a year later, and in 1660 he was elected to a fellowship at All Souls. He graduated in law (bachelor, 1665, doctor, 1670), but made medicine his profession, and became noted for his practice--therein, especially in the summer time, in the city of Bath.

In 1678, on the proposal of Robert Hooke, he was chosen a fellow of the Royal Society. The following year, after a marriage which was not altogether to his content, he died in London in September 1679. He published at Oxford in 1668 two tracts, on respiration and rickets, and in 1674 these were reprinted, the former in an enlarged and corrected form, with three others De sal-nitro et spiritu nitro-aereo, De respiratione foetus in utero et ovo, and De motu musculari et spiritibus animalibus as Tractatus quinque medico-physici.

The contents of this work, which was several times republished and translated into Dutch, German and French, show him to have been an investigator much in advance of his time.

Accepting as proved by Boyle's experiments that air is necessary for combustion, he showed that fire is supported not by the air as a whole but by a more active and subtle part of it. This part he called "spiritus igneo-aereus," or sometimes "nitro-aereus"; for he identified it with one of the constituents of the acid portion of nitre which he regarded as formed by the union of fixed alkali with a spiritus acidus. In combustion the particulae nitro-aereae--either pre-existent in the thing consumed or supplied by the air combined with the material burnt; as he inferred from his observation that antimony, strongly heated with a burning glass, undergoes an increase of weight which can be attributed to nothing else but these particles.

In respiration he argued that the same particles are consumed, because he found that when a small animal and a lighted candle were placed in a closed vessel full of air the candle first went out and soon afterwards the animal died, but if there was no candle present it lived twice as long.

He concluded that this constituent of the air is absolutely necessary for life, and supposed that the lungs separate it from the atmosphere and pass it into the blood. It is also necessary, he inferred, for all muscular movements, and he thought there was reason to believe that the sudden contraction of muscle is produced by its combination with other combustible (salino-sulphureous) particles in the body; hence the heart, being a muscle, ceases to beat when respiration is stopped. Animal heat also is due to the union of nitro-aerial particles, breathed in from the air, with the combustible particles in the blood, and is further formed by the combination of these two sets of particles in muscle during violent exertion.

In effect, therefore, Mayow--who also gives a remarkably correct anatomical description of the mechanism of respiration--preceded Priestley and Lavoisier by a century in recognizing the existence of oxygen, under the guise of his "spiritus nitro-aereus," as a separate entity distinct from the general mass of the air; he perceived the part it plays in combustion and in increasing the weight of the calces of metals as compared with metals themselves; and, rejecting the common notions of his time that the use of breathing is to cool the heart, or assist the passage of the blood from the right to the left side of the heart, or merely to agitate it, he saw in inspiration a mechanism for introducing oxygen into the body, where it is consumed for the production of heat and muscular activity, and even vaguely conceived of expiration as an excretory process. Read more ...