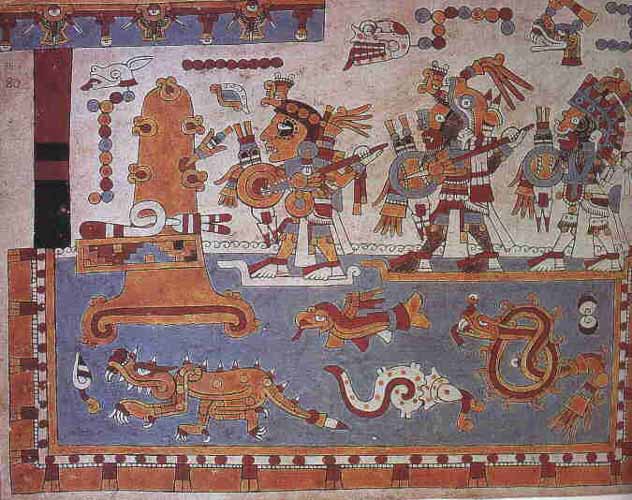 The Mayans evolved the only true written system native to the Americas and were masters of mathematics and engineering.

The Maya writing system (often called hieroglyphics from a vague superficial resemblance to the Egyptian writing, to which it is not related) was a combination of phonetic symbols and ideograms. It is the only writing system of the Pre-Columbian New World that can completely represent spoken language to the same degree as the written language of the old world. The decipherment of the Maya writings has been a long laborous process. Bits of it were first deciphered in the late 19th and early 20th century (mostly the parts having to do with numbers, the calendar, and astronomy), but major breakthroughs came starting in the 1960s and 1970s and accelerated rapidly thereafter, so that now the majority of Maya texts can be read nearly completely in their original languages.

With the decipherment of the Maya script it was discovered that the Maya were one of the few civilizations where artists attached their name to their work. The Maya developed a highly complex system of writing, using pictographs and phonetic or syllabic elements. Their writing was highly sophisticated. Most likely only members of the higher classes were able to read their symbols.

Maya writing was composed of recorded inscriptions on stone and wood and used within architecture. Rectangular lumps of plaster and paint chips are a frequent discovery in Maya archaeology; they are the remains of what had been books after all the organic material has decayed.

Folding tree books were made from fig tree bark and placed in royal tombs. Unfortunately, many of these books did not survive the humidity of the tropics or the invasion of the Spanish, who regarded the symbolic writing as the work of the devil.

The Maya also carved these symbols into stone, but the most common place for writing was probably the highly perishable books they made from bark paper, coated with lime to make a fresh white surface. These 'books' were screen-folded and bound with wood and deer hide. They are called codices; codex is singular.

Unfortunately zealous Spanish priests shortly after the conquest ordered the burning of all the Maya books. While many stone inscriptions survive - mostly from cities already abandoned when the Spanish arrived - only 3 books and a few pages of a fourth survive from the ancient libraries. Only four codices remain today. 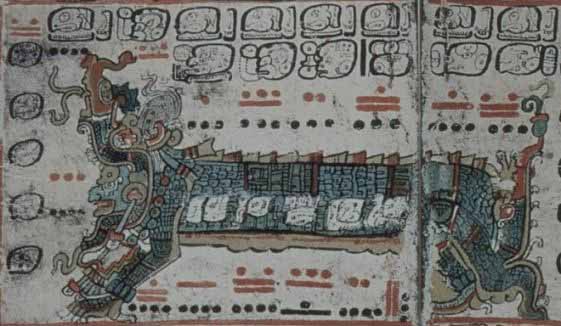 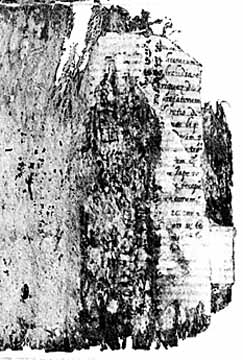 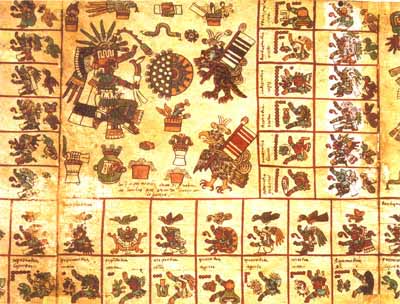 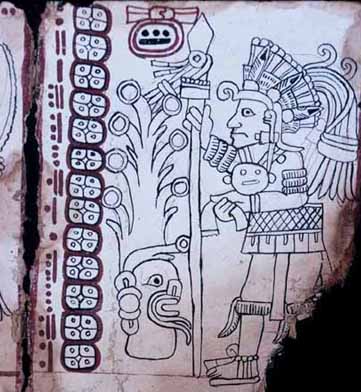 The contents of the codices must have varied, but some of them were evidently similar to astronomic almanacs. We have examples of a Venus table, eclipse tables in a codex in Dresden. There is a codex in Paris that seems to contain some kind of Maya Zodiac, but if it is and how it must have worked are still unknown.

Another major example of Maya almanacs are present in the Madrid Codex. The fourth codex is called the Grolier and was authenticated as late as 1983. These codices probably contained much of the information used by priests or the noble class to determine dates of importance or seasonal interest. We can only speculate as to whether or not the Maya developed poetry or drama that was committed to paper. The codices probably kept track of dynastic information as well.

Mayans had a voluminous literature, covering the whole range of native interests either written, in their own peculiar "calculiform" hieroglyphic characters, in books of maguey paper or parchment which were bound in word, or carved upon the walls of their public buildings.

Twenty-seven parchment books were publicly destroyed by Bishop Landa at Mani in 1562, others elsewhere in the peninsula, others again at the storming of the Itza capital in 1697, and almost all that have come down to us are four codices, as they are called, viz., the "Codex Troano", published at Paris in 1869; another codex apparently connected with the first published at Paris in 1882; the "Codex Peresianus", published at Paris in 1869-71; and the "Dresden Codex", originally mistakenly published as an Aztec book in Kingsborough's great work on the "Antiquities of Mexico" (London, 1830-48). Besides these pre-Spanish writings, of which there is yet no adequate interpretation, we have a number of later works written in the native language by Christianized Maya, shortly after the conquest.

Several of these have been brought together by Brinton in his "Maya Chronicles". The intricate calendar system of the Maya, which exceeded in elaboration that of the Aztec, Zapotec, or any other of the cultured native races, has been the subject of much discussion.

It was based on a series of katuns, or cycles, consisting of 20 (or 24), 52, and 260 years, and by its means they carried their history down for possibly thirteen centuries, the completion of each lesser katun being noted by the insertion of a memorial stone in the wall of the great temple at Mayapan.