The Maya discovered Zero value and the golden proportion - advancing them beyond other ancient civilizations and allowing them to create their very detailed calendar, some of the prophecized events unfolding through the centuries, even in our current timeline, though not equated in media coverage. To understand the calendar more in depth, is to follow events as they unfold in today's time line based on ancient predictions recorded hundreds of years ago.

Instead of the ten digits used today, the Maya used a base number of 20. (Base 20 is vigesimal.) They also used a system of bar and dot as "shorthand" for counting. A dot stood for one and a bar stood for five. Because the base of the number system was 20, larger numbers were written down in powers of 20. We do that in our decimal system too. Numbers were written from bottom to top. Fractions were not used. Maya merchants often used cocoa beans, which they layed out on the ground, to do their calculations. 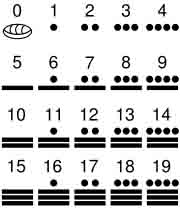 In common with the other Mesoamerican civilizations, the Maya used a base 20 (vigesimal) and base 5 numbering system (see Maya numerals). Also, the preclassic Maya and their neighbors independently developed the concept of zero by 36 BC (This is the first documented use of a true 0, though the Babylonians long before had developed a placeholder-0 that was used only between other digits.). Inscriptions show them on occasion working with sums up to the hundreds of millions and dates so large it would take several lines just to represent it. They produced extremely accurate astronomical observations; their charts of the movements of the moon and planets are equal or superior to those of any other civilization working from naked eye observation.

Also in common with the other Mesoamerican civilizations, the Maya utilized a highly accurate measure of the length of the solar year, far more accurate than that used in Europe as the basis of the Gregorian Calendar. They did not use this figure for the length of year in their calendar, however. Instead, the Maya calendar(s) were based on a year length of exactly 365 days, which means that the calendar falls out of step with the seasons by one day every four years. By comparison, the Julian calendar, used in Europe from Roman times until about the 16th Century, accumulated an error of one day every 128 years. The modern Gregorian calendar accumulates a day's error in approximately 3257 years.