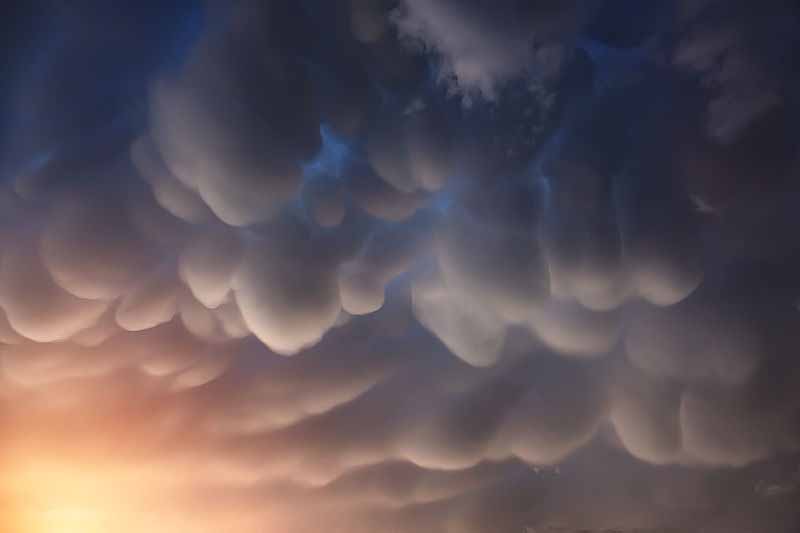 Mammatus (mamma or mammatocumulus), meaning "mammary cloud", is a cellular pattern of pouches hanging underneath the base of a cloud, typically cumulonimbus rainclouds, although they may be attached to other classes of parent clouds. The name mammatus is derived from the Latin mamma (meaning "udder" or "breast"). According to the WMO International Cloud Atlas, mamma is a cloud supplementary feature rather than a genus, species or variety of cloud. They are formed by cold air sinking down to form the pockets contrary to the puffs of clouds rising through the convection of warm air. These formations were first described in 1894 by William Clement Ley.

Mammatus are most often associated with anvil clouds and also severe thunderstorms. They often extend from the base of a cumulonimbus, but may also be found under altocumulus, altostratus, stratocumulus, and cirrus clouds, as well as volcanic ash clouds. When occurring in cumulonimbus, mammatus are often indicative of a particularly strong storm or maybe even a tornadic storm (in the United States). Due to the intensely sheared environment in which mammatus form, aviators are strongly cautioned to avoid cumulonimbus with mammatus as they indicate convectively induced turbulence. Contrails may also produce lobes but these are incorrectly termed as mammatus.

Mammatus may appear as smooth, ragged or lumpy lobes and may be opaque or translucent. Because mammatus occur as a grouping of lobes, the way they clump together can vary from an isolated cluster to a field of mammae that spread over hundreds of kilometers to being organized along a line, and may be composed of unequal or similarly-sized lobes. The individual mammatus lobe average diameters of 1Đ3 km and lengths on average of 0.5 km. A lobe can last an average of 10 minutes, but a whole cluster of mamma can range from 15 minutes to a few hours. They are usually composed of ice, but also can be a mixture of ice and liquid water or be composed of almost entirely liquid water.

True to their ominous appearance, mammatus clouds are often harbingers of a coming storm or other extreme weather system. Typically composed primarily of ice, they can extend for hundreds of miles in each direction and individual formations can remain visibly static for ten to fifteen minutes at a time. While they may appear foreboding they are merely the messengers - appearing around, before or even after severe weather. Read more 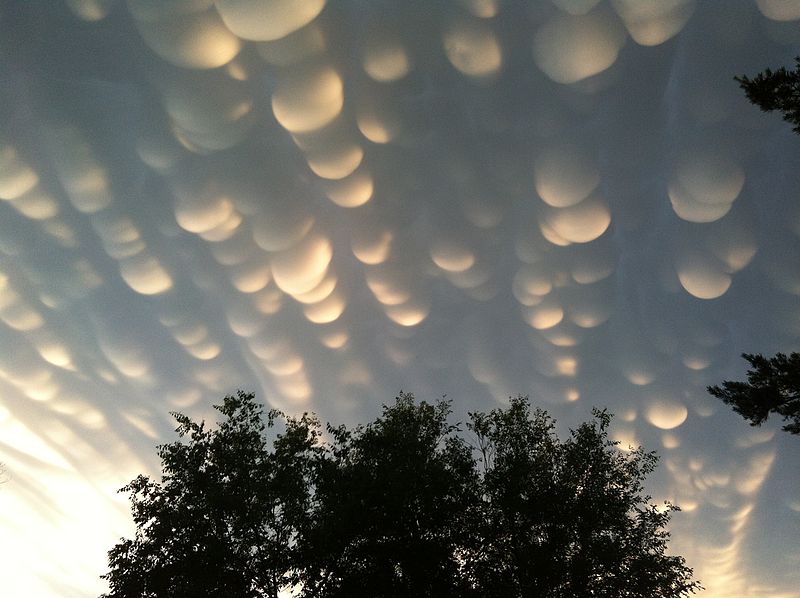 Normal cloud bottoms are flat. This is because moist warm air that rises and cools will condense into water droplets at a specific temperature, which usually corresponds to a very specific height. As water droplets grow, an opaque cloud forms. Under some conditions, however, cloud pockets can develop that contain large droplets of water or ice that fall into clear air as they evaporate. Such pockets may occur in turbulent air near a thunderstorm. Resulting mammatus clouds can appear especially dramatic if sunlit from the side. These mammatus clouds were photographed over Regina, Saskatchewan, Canada during the past summer.