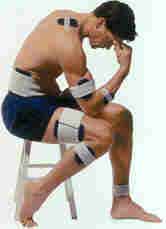 Magnet therapy, or magnetic therapy, or magno-therapy is an alternative medicine claiming that certain medical disorders can be effectively treated by exposure to magnetic fields. There is no scientific evidence for the claim but it may act as a placebo in some people. Adherents believe that magnetic fields from permanent magnets placed close to the body can cause bones to heal faster, relieve pain, and perform other forms of healing. It is most commonly used for joint disorders and back problems. It is considered to be a pseudoscience by the medical and scientific communities.


FDA approves brain stimulation device for OCD   Medical Express - August 17, 2018
Transcranial magnetic stimulation uses magnetic fields to stimulate nerve cells in the brain. The FDA approved it as a treatment for major depression in 2008 and for treating pain associated with certain migraines in 2013. Transcranial magnetic stimulation has shown its potential to help patients suffering from depression and headaches. No serious reactions to treatment with the device were reported, according to the FDA.

Proponents of magnet therapy claim that subjecting certain parts of the body to doses of magnetic "energy" (or fields) has a beneficial effect. This belief has led to the popularization of an industry involving the sale of magnetic-based products for "healing" purposes: magnetic bracelets and jewelry; magnetic straps for wrists, ankles, and the back; shoe insoles, mattresses, and magnetic blankets (blankets with magnets woven into the material); and even water that has been "magnetized".

Criticism of these products focuses on scientific facts about magnets, including the claim that the typical magnet used in a bracelet purchased over-the-counter is not powerful enough to penetrate human skin, let alone strong enough to have a lasting effect on muscle tissue, bones, blood vessels, or organs.

Notably, some people working in physics research work for hours per day with their whole body immersed in magnetic fields far stronger than those from the bracelets, and (if they observe precautions regarding pacemakers) are no more or less healthy than their peers. There are handheld neodymium magnets that produce a field of over one tesla and are often used in various hobbies. Household devices such as a garbage disposal, or an electric razor, also produce significant magnetic fields when in use.

No magnet healing product manufacturers have demonstrated scientifically that they actually achieve what they claim, and most cannot even agree on what exactly the magnetic fields do. Some claim that the magnets help to circulate the blood by some interaction with the iron in hemoglobin, a major component of red blood cells. However, in its ionized form, iron is not ferromagnetic. If it were, use of magnetic resonance imaging would instantaneously kill patients. Still others claim that the magnets can restore the body's electromagnetic energy balance. There are also claims that the south pole of a magnet acts different on the body than the north pole. The list of ways that manufacturers purport that magnetic fields affect the body is almost endless.


Healing is about restoring balance to the body. The physical body is electrical energy and is effected by anything with an electromagnetic field - such as magnets. If used corrected they can relieve pain and speed healing.

Examples of life's magnetic nature are now plentiful. Many creatures, such as homing pigeons, butterflies, and bees navigate using Earth's magnetic field. Even humans can roughly sense magnetic direction. These abilities, in part, appear to be mediated through a magnetic substance called magnetite, which has been discovered in the tissue, including the human brain, of many living things. Researchers have found magnetite clusters near the brain's all-important, magnetically sensitive pineal gland, which secretes hormones affecting the entire body.

Not only are we affected by magnetic fields but we also generate them. For example, scientists can measure the brain and heart's magnetic fields with instruments called the Magnetoencephalograph and magnet-ocardiogram, respectively.

Life's magnetic potential is so great that we can even defy gravity under the right circumstances. For example, scientists can levitate frogs by using high-intensity magnetic fields. When subjected to such strong fields, spinning electrons within the frog align themselves to cumulatively create a small magnetic field. Like a compass needle repulsed by a bar magnet, the large external field repels the frog's small field sufficiently to counteract gravity.

Magnetism has always been a part of mankind's healing armamentarium. The earliest mention of the magnet as a healing agent is one of the four Vedas on the treatise of medicine - the Atharvaveda.

Many indigenous and ancient civilizations - including the Hebrews, Arabs, Indians, Chinese, Egyptians, and Greeks - used magnets for healing. According to Legend, Cleopatra wore a magnetic amulet on her forehead to preserve her youth; this placement put it near the brain's magnetically sensitive pineal gland.

One of the more influential figures in magnetic-healing history was the 15th century physician Paracelus, who helped to bring medicine out of the Dark Ages. Supposedly, the inspiration for Goethe's Dr. Faustus, who sold his soul to the devil in exchange for knowledge, Paracelus had visionary insights on the role of energetic forces, including magnetism, in healing. he believed that magnetic force could energize the body and promote self-healing. His work greatly influenced Mesmer.

Although this scrutiny ruined Mesmer's career, in a paradoxical twist of fate, commission member Joseph Guillotin's invention later beheaded the King, as well as many other commission members. Mesmer died many years later.

Until relatively recently, scientists believed that life was mostly a biochemical process. The idea that magnetic fields could significantly influence living systems seemed far-fetched. Perspectives have shifted rapidly, however, and many scientists now believe that at some level we are fundamentally electromagnetic creatures.

This radical paradigm shift has profound medical implications because modern medicine has focused on biochemical processes. If these processes are influenced by our electromagnetic nature, any healing approach that focuses exclusively on them will ultimately be limited.

In America, magnet use soared after the Civil War. People could even order the devices through the Sears Roebuck catalog. Turn-of-the-century medical texts devoted chapters to the subject. However, as pharmaceutical approaches revolutionized medicine, magnetic therapy lost its appeal - until recently when the limitations of these approaches became more evident.

The magnetic healing renaissance has been remarkable. Millions of people throughout the world now use magnets, sales total more than $2 billion a year, and cost-conscious, some health-insurance companies cover the therapy.

In recent years some well-known athletes have used magnetic therapy for pain relief.

In terms of healing an area of the body, magnets are placed either on or near the body, where they act to stimulate the cellular and chemical area where the healing is to occur. That is, blood is accelerated to the area, which increases the oxygenation of the blood and dilates the blood vessels, providing additional oxygen and nutrients to the place in need of healing.

In terms of reducing pain, some doctors believe that pain reduction with magnets works similarly to using a heating pad. The magnets are again placed on or near the body, and are used to stimulate nerve endings by acting to interrupt pain signals to the brain. The difference is that heat treatment can be more intense, while magnetic healing is more constant. So, while you cannot wear a heating pad for hours at a time, you can wear a magnetic bracelet every day.

Some supporters of magnetic therapy seem to base their belief on a metaphysical assumption that all illness is due to some sort of imbalance or disharmony in energy. The balance or flow of electromagnetic energy must be restored to restore health, and magnets are thought to be able to do this.

Magnetism is created primarily by the spin of electrons within a substance. If the spin of sufficient numbers of electrons is aligned, the substance becomes magnetic. Although iron is readily magnetized because of its many surplus electrons, virtually all substances can be magnetized. Natural magnets -lodestones - were created when iron-containing lava cooled and was magnetized by Earth's magnetic field.

Most magnets are now made by passing a strong surge of direct-current (DC) electricity through an iron bar. Their strength has been greatly increased by combining iron with other elements.

The force (magnetic field of energy) from a magnet is measured in gauss strength. Magnets used for pain relief and healing typically measure between 300-1000 gauss.

Magnetic healing products come in a variety of shapes and sizes, from wrist and ankle jewelry to Velcro wraps to magnet-filled pads to fit on your bed.

Wraps and jewelry can be placed in several spots on your body, including feet, ankles, knees, hips, back, hands, wrists, shoulders, neck, and forehead.

Magnets are available in a wide-range of materials, strengths, and shapes - Tiny BB-size used by acupuncturists, dime-size, neodymium (a rare-earth metal) of extraordinary power, domino, rectangular block, and flexible magnets of any size and shape.

Therapeutic magnets are often cased in ceramic or embedded in an elastic patch or flexible strip. They are incorporated in wrist and back supports, seat and mattress pads, jewelry, and clothing-related items, such as shoe inserts and belts.

Many medical applications and scientific studies have used pulsed electromagnetic fields. In these fields, the electric current generating the magnetic field is turned on and off at a specified frequency.

Because magnetic fields drop off quickly with distance, the closer the magnet is to the skin the better. Although effectiveness may wear off as the body adapts, magnets may be worn as long as desired.

A magnet's therapeutic strength is a function of magnetic flux - measured in gauss - and physical size. For reference, Earth's magnetic field is 0.5 gauss, a refrigerator magnet holding a shopping list about 10 gauss, and a cupboard-door latch magnet about 400. Therapeutic magnets range from 200 to over 10,000 gauss.

Magnet size is also therapeutically important. For example, small neodymium magnets may have strength in excess of 10,000 gauss. However, because their fields can only penetrate a few inches into the body, they are used for treating localized conditions. In contrast, a large block magnet of much lower flux strength may penetrate through the body. Given the importance of size, the profound influence Earth's small 0.5-gauss field has on life is more readily understandable.

Although understudied, a magnet's poles appear to exert different healing effects. The north one (the side that attracts the north-pole-seeking end of a compass needle) calms, sedates, and reduces inflammation. In contrast, the south pole stimulates and promotes healing, growth and activity.

Magnetic fields can attract calcium ions to heal a broken bone or help move calcium away from painful arthritic joints.

One of my clients placed a small bar magnet inside his cast after he broke his arm. The arm healed in three weeks instead of the anticipated six.

Immediately after magnetic treatment no cold baths or meals should be taken.

Watches should be removed during treatment.

Magnets must be kept away from children.

When not in use magnets must be kept joined with a keeper in a wooden box.

High powered magnets should not be applied to pregnant woman.

Opposite poles of high power magnets must not be near each other face to face.

All bio-magnetic aids must be kept away from fire.