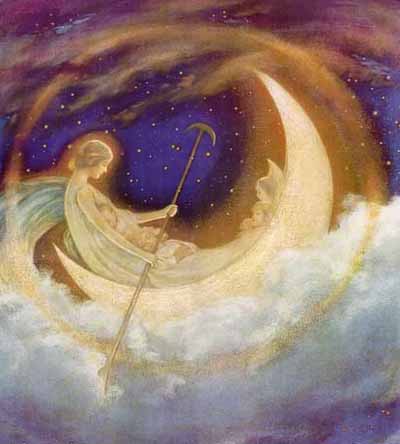 The Moon is the lunar energy - the lunar goddess vs. the Sun or Masculine energy. All things in our reality have duality, polar opposites.

The Moon is the only natural satellite of the Earth and is the closest planetary (it's not really a planet, but it's influences are strongly felt) object to us. The moon is without water and the only light it receives is reflected from the Sun. The light which repeats itself in phases every 28 days is caused by the Moons orbit around Earth. Because it is always near us, it represents are'shadow self', our changeable moods and feelings. The relationship betweenthe Moon and the Sun are especially important in Natal charts. Together these two objects represent the anima:conscious (sun) and animus:subconscious (moon) parts of our self according to Carl Jung.

The Moon symbolizes emotions, feelings, instincts and day to day habit patterns and routine. The Moon is very strongly related to mother, home and family. The sign the Moon is in describes how a person is nurtured and nurturing. Its house shows the circumstances under which emotions are most likely to express themselves.

The moon is the ruler of the 4th house.

In Roman mythology, the Moon was represented by Diana, the hunter goddess.

In Western astrology The Moon is said to represent the feeling nature of the individual.

The moon is associated with a person's emotional make-up, unconscious habits, rhythms, memories and moods. It is also associated with the mother, maternal instincts or the urge to nurture, the home, and the past.

The moon is used to characterize the inner child within us, as well as the past and how we have been as individuals rather than how we are now. It is also used to represent the perception one has of one's mother, so someone with a Pisces Moon would be more likely to see their mother as a Piscean type, even if in reality that was not the case. In the horoscope the aspects the moon makes with other planets and the transits the slower moving planets make to the moon are all said to have a strong impact on how our lives unfold.

The moon is also said to represent receptivity, vulnerability, etc. but this should not suggest that its power is considered less than the sun's. From an astrological perspective (in which we assume, for the sake of argument, that the earth is fixed and everything else moves) the sun and moon are the same size.

From an astrological perspective, they are equals; a solar eclipse reminds us of this so that we do not doubt the power of the moon, which is hidden and mysterious but no less influential.

The first-century poet Manilius, described the Moon or Luna, as melancholic.

In medicine the moon is associated with the digestive system, stomach, breasts, genitals, buttocks, the ovaries and menstruation, and the pancreas.


The Moon is the Earth's companion satellite. The Moon is large enough for its gravity to affect the Earth, stabilising its orbit and producing the regular ebb and flow of the tides. The Moon is also familiar to us for its different phases, waxing and waning in appearance in an unchanging cycle. For this reason, astrologers consider the moon to be at least secondary in importance to the sun in astrological terms, and it is widely considered to be just as important as the sun.

The Moon orbits the earth in 28 days, spending a fleeting 2.33 days in each of the signs of the zodiac. Recently, more accurate measurements of the Lunar orbital period have revealed two different numbers, depending on viewpoint. The synodic period is measured relative to the Sun and gives us a period of 29.5 days from new Moon to new Moon, the start of the Lunar month. When observed from the Earth and relative to a fixed point in space, the sidereal period is 27.3 days with minor variations. In order to give a figure in whole numbers for ease of astrological calculation the Lunar orbit can be approximated to 27.75 days which then returns a period of 54 hours or 2.25 days for the Lunar transit of each sign.

Also important in astrology are the moon's nodes. The nodes are where the moon's path crosses the ecliptic, the sun's path across the sky. This means that they are the only locations where solar eclipses can occur. The North node marks the place where the moon crosses from South to North (or ascends), while the South node marks where the moon crosses from North to South (or descends). The nodes' motion is always retrograde, so that they appear to move backwards through the zodiac. This motion is the same as the precession of the equinoxes, but in the case of the moon it only takes 19 years to complete a cycle. The two nodes are always exactly 180 degrees apart from each other at opposite ends of the ecliptic (i.e. if the north node is at 23 degrees Aries, the south node will be at 23 degrees Libra).

A void-of-Course Moon occurs when the moon in transit makes its final major aspect before it changes from one sign of the zodiac to the next. It ends when the moon enters the next sign. In astrological terms it is a period when human judgement is impaired, ventures are bound to fail, business deals collapse, journeys are delayed, and historic events during such periods have an unusual impact on cultural evolution. People born on a void-of-course moon are said to be highly original and impressionable, who "bear the spark of greatness". They react differently to life and its challenges. On the negative side, they can have an unfavorable affect on the lives of many people with their irresponsible behavior and erratic personality.

In Chinese cosmogony the moon is typically said to be identified with the feminine principle, the yin. This may be because a woman's menstrual cycle roughly corresponds to one lunar month that is of 29 or 30 days. In Chinese culture, the sun and the moon, or yang and yin, are said to represent the masculine and the feminine, respectively. One way to think about the interaction of the sun and moon signs in one particular person's horoscope is Jung's theory of the anima/animus, which is very similar to the Chinese idea that every human being should strive to balance the yang and the yin, or the masculine and the feminine, in her/his own personality and life.

In Indian astrology, (also called Jyotisa or Vedic astrology) the Moon is a lunar deity called Chandra. Chandra is also identified with the Vedic lunar deity Soma. He is described as young, beautiful, fair; two-armed and having in his hands a club and a lotus. He rides his chariot (the moon) across the sky every night, pulled by ten white horses or an antelope. He is connected with dew, and as such, is one of the gods of fertility. He is also called Nishapati (lord of the night) and Kshuparaka (one who illuminates the night). He as Soma, presides over Somvar or Monday. In Indian astrology the moon represents the mind, queenship, mother, emotions, sensitivity, softness and imagination.