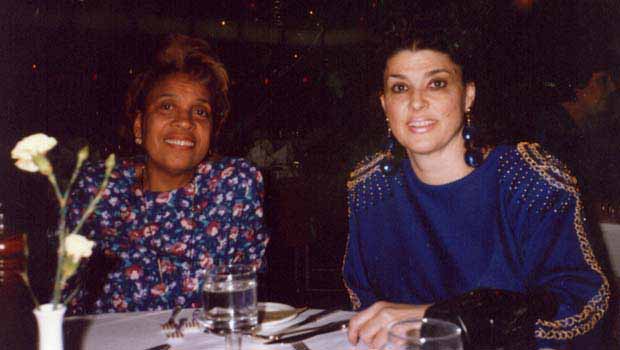 Creation is an endless process,
An ever-changing kaleidoscope of hues.
And we ride the frequencies together
On flowing streams of royal blue.


And like the "Flower of Life" transforming
One fades while yet another blooms.
Continuing on with creations cycles
Connected forever, you and I.

Louise worked as a school aide while raising her family. She never said 'No' to anybody - no matter what they asked of her. She was the most compassionate person you could ever meet. She was a caretaker!

In the summer of 1968 Weezie took a summer job as my housekeeper to make some extra money.

From the moment we met there was an instant karmic connection - never one of employer and employee.

When September rolled around and Louise went back to school she decided to say on as housekeeper coming to work for me on Saturdays.

Through the years we became best friends - sharing in the raising of our families - helping each other over the hardships - becoming sisters.

We traveled the world together and helped each other through times of births, deaths, raising our families, always laughing and seeing the best in everything. We were family.

Though Louise did not journey on my metaphysical path - she knew everything that was going on and spoke to Z.

Louise was diagnosed with the cancer in September 1998.

She never let it get her down. She was always in service to others till the end.

On Sunday evening Z came to me and said it was time for Louise to leave her physical body. He said that she was ready and had said her good-bys to everyone.

Z asked if I would like to help her with her tranisition.

I had never done anything like that before and was not sure what to do.

I lay down on my couch - the lights from the Verrazano Bridge just in front of me - seeming ever so close.

Z and I went to the hospital where Louise's soul waited to leave the physical from it had used for so many years.

Z extended his hand to her as I watched.

I saw her soul lift from its body.

As it did - it turned into a golden ball of light which filled her hospital room with white light embracing all who came to say good - by.

I watched the golden ball grow larger and larger as she left the room.

Suddenly she appeared to take off like a bullet -going back to the Light Source as I watched with Z.

I went to sleep hoping we would meet on the other side.

In the morning I remembered nothing from dream time and went about my day.

As I was about to go out for errands - Louise's son, Robert, called to tell me that Louise had passed the night before at the same time I saw Z take her out.

Yesterday was a difficult day as I told my family and friends about Louise's passing.

I kept myself busy with Crystalinks among other things.

In the evening I assumed that Louise was back to Source and I had lost my playmate.

When I was taking a shower - lo and behold - who should join me - but Louise!

I had to laugh!

Weezie was happier than any other Spirit I had ever seen.

I was amazed at how clearly I was able to hear and see her.

She sent gave me a flower and asked why I was crying.

I said, "Because you're dead! And I have been reminiscing about our times together and how I won't be able to call you . . .!"

Weezie laughed and said, "Don't be silly! Now we can be best friends in a different way - the way it was meant to be. You're here to teach people that we are still as One - now look at you falling apart!"

I suddenly realized how true her words were!

Weezie said that our meeting was never by accident and that nothing was changed - well almost nothing - and that now our friendship would take on a new dimension - that's all!

She had chosen an illnesses that would allow her family a proper time frame to accept the fact that she would be leaving.

They could now connect with her in dream time and sense her presence but would be strong enough to carry on. (Louise was 67 - her 4 children are in their 40's). They would have the spiritual strength she had taught them through the years to get them through this difficult time.

She was so happy to be free. She told me that she saw Z and I help her out of her physical body.

That was so good to hear!

Weezie showed me her transition not just to the Light in the pyramid - but making a stop through the paws of the Sphinx. (We laughed).

I asked her why she had done that and she said - to check it out for me. She always seemed to want to help me with whatever I was doing.

She told me to forget about the Sphinx as it had all been entered into.

I was so surprised to hear her talk about my work in that way.

We left my shower and sat on the couch talking the way we used to - about life, how she plans to work with Z and I to complete the work, and girl talk (giggle).

Yolanda called and I told her about Louise. We began to chat with Louise about the spirit of a woman who lives in Yolanda's house and what she wants. Louise even picked up the spirit of Yolanda's dog who had just passed - which I didn't know. Now we were 3 girls laughing about our families and personal lives.

After Yolanda and I hung up - Louise told me that it was now her time to help me complete my work from the other side.

Weezie did show me levels of sorts but said they were of no significance - as there is no heirarchy as we come to see it.

Angels are angels. Spirits help us. She took a harp and showed me the chords - tones.

She gave me a bouquet of 12 flowers - in different colors - which had different variations of those colors - like floating liquid colors.

I asked her how she had learned so much so quickly.

Weezie said that she had only forgotten this information when she was on the physical plane - but once 'out of body' - remembered everything in an instant.

Weezie left me to be with her physical family and said she would return today.

In all of my years - with all of the Spirits I have ever worked with - this is the most amazing.

I guess I did lose my intuitive knowing at the time of great loss down here - but it took a guiding spirit to set me back on my path!

We never lose the souls who are part of us.

At the funeral hundreds of people who came to say good-by to Weez and speak about the kind loving soul Weezie was.

I will never forget the pastor talking about the last time he had seen Louise.

He had been to the hospital on Sunday - the night she died.

He had left her room to go home - when something told him to go back into the room.

As he entered the room he saw her lifting from her body - and a gold ball of light filled the room.

This occurred at the same time Z took her over.

Talking to Weezie between dimensions is not as great as talking to the 3D version of her soul - but we have lots of fun adventures ahead of that you can be sure!

On one occasion she came to tell me to call her son, Louis, which I did. I used my ability to channel her to help him resolve his issues with her death.

Last night as I was falling asleep Louise came to me with a smile on her face.

Suddenly she turned into Della Reese - which puzzled me. After a few minutes I understood - Della Reece is the star of TV show "Touched by an Angel". Is Weezie an Angel?

Suddenly she changed again - this time into black singer Diana Ross and sang, "My world is empty without you babe!"

Weezie liked to call the members of my family, 'Baby' or 'Babe'.