As much as I would like the light to be created by something human or alien, I think this is some sort of light fraction. Those of us in the UFO community have always suspected (known) there are human and alien bases on Mars, not to mention wormholes (stargates) to other places in the universe including Earth.

I find the timing of this discovery very interesting. It always triggers the idea that the governments are finally ready to come forward with the truth about alien visitations. I don't see that happening unless the governments can no longer deny the truth, or the program comes to a close. 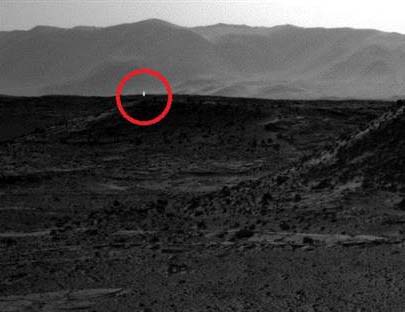 Bright Blips on Mars Pictures Spark a Buzz Among UFO Fans   NBC - April 8, 2014
The red circle highlights a bright speck in a picture sent back from the right-hand navigation camera on NASA's Mars Curiosity rover on April 3. Bright spots that look like a beacon flashing from a distant Martian hillside are attracting attention from the UFO crowd - but are they real or just photographic glitches?


Light on Mars! Is a distant 'glow' seen in Curiosity rover's latest photo proof that there IS intelligent life on the red planet?   Daily Mail - April 8, 2014
An artificial light source was seen this week in this NASA photo which shows light shining upward from ... the ground.