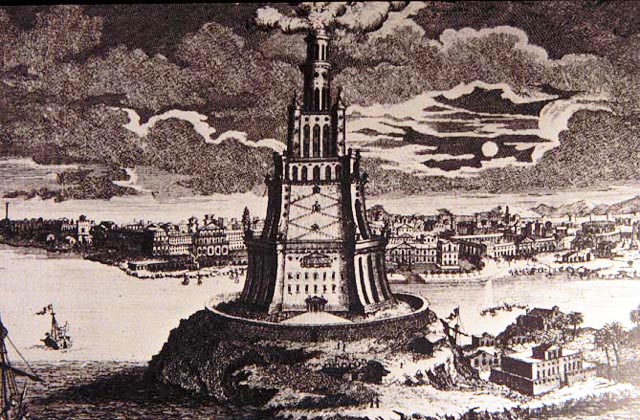 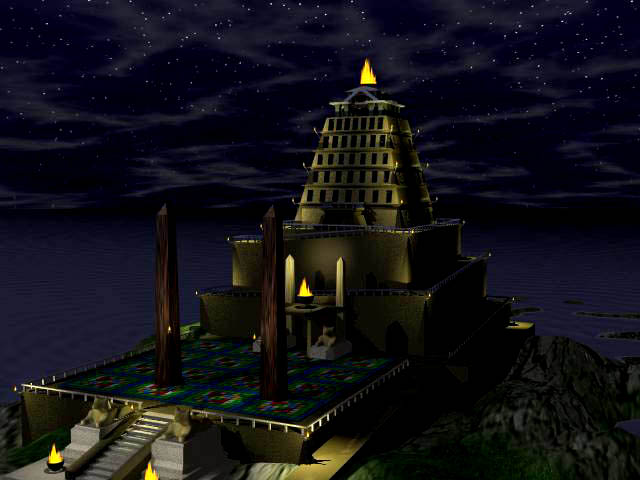 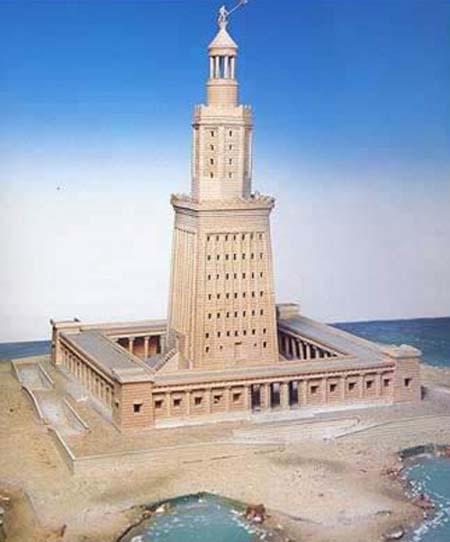 The Pharos of Alexandria was a lighthouse built in the 3rd century BC on the island of Pharos in Alexandria, Egypt to serve as that port's landmark, and later, a lighthouse. With a height variously estimated at between 115 and 135 metres (383 - 440 ft) it was among the tallest man-made structures on Earth for many centuries, and was identified as one of the Seven Wonders of the World by Antipater of Sidon.

It ceased operating and was largely destroyed as a result of two earthquakes in the 14th century AD; some of its remains were found on the floor of Alexandria's Eastern Harbour by divers in 1994. More of the remains have subsequently been revealed by satellite imaging.

Constructed from large blocks of light-colored stone, the tower was made up of three stages: a lower square section with a central core, a middle octagonal section, and, at the top, a circular section.

At its apex was positioned a mirror which reflected sunlight during the day; a fire was lit at night. Extant Roman coins struck by the Alexandrian mint show that a statue of a triton was positioned on each of the building's 4 corners. A statue of Poseidon stood atop the tower during the Roman period.

The design of minarets in many early Islamic mosques many centuries later followed a similar three-stage design to that of the Pharos, attesting to the building's broader architectural influence.

Legends tell of the light from the Pharos being used to burn enemy ships before they could reach shore, however this is highly unlikely due to the relatively poor quality of optics and reflective technology in the time period in which the building existed.

Only slightly less impressive - and probably more accurate - is the claim that the light from the lighthouse could be seen up to 35 miles (56 km) from shore. 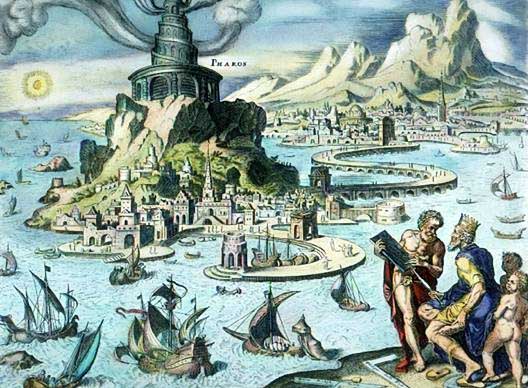 Pharos was a small island just off the coast of Alexandria. It was linked to the mainland by a man-made connection named the Heptastadion, which thus formed one side of the city's harbor. As the Egyptian coast is very flat and lacking in the kind of landmark used at the time for navigation, a marker of some sort at the mouth of the harbour was deemed necessary - a function the Pharos was initially designed to serve. Use of the building as a lighthouse, with a fire and reflective mirrors at the top, is thought to date to around the 1st Century AD, during the Roman period. Prior to that time the Pharos served solely as a navigational landmark.

The building was designed by Sostratus of Cnidus (Greel Sostratos of Knidos or the Cnidian) in the 3rd century BC, after having been initiated by Satrap (governor) Ptolemy I of Egypt, Egypt's first Hellenistic ruler and a general of Alexander the Great.

After Alexander died unexpectedly at age 33, Ptolemy Soter (Saviour, named so by the inhabitants of Rhodes) made himself king in 305 BC and ordered the construction of the Pharos shortly thereafter.

The building was finished during the reign of his son, Ptolemy II Philadelphos.

According to popular legend, Sostratus was forbidden by Ptolemy from putting his name on his work. But the architect left the following inscription on the base's walls nonetheless: Sostratus, the son of Dexiphanes, the Cnidian, dedicated (or erected) this to the Saviour Gods, on behalf of those who sail the seas.

Inscription written in Greek translates - Sostratos of Dexiphanes [meaning: son of Dexiphanes] the Cnidian to Saviour Gods on behalf of the sea-faring.

These words were hidden under a layer of plaster, on top of which was chiseled another inscription honoring Ptolemy the king as builder of the Pharos. After centuries the plaster wore away, revealing the name of Sostratus.

The Pharos' walls were strengthened in order to withstand the pounding of the waves through the use of molten lead to hold its masonry together, and possibly as a result the building survived the longest of the Seven Wonders - with the sole exception of the Great Pyramid of Giza. It was still standing when the Muslim traveller Ibn Jubayr visited the city in 1183.

He said of it that: "Description of it falls short, the eyes fail to comprehend it, and words are inadequate, so vast is the spectacle." It appears that in his time there was a mosque located on the top.

It was severely damaged by two earthquakes in 1303 and 1323, to the point that the Arab traveller Ibn Battuta reported not being able to enter the ruin.

Even the stubby remnant disappeared in 1480, when the then-Sultan of Egypt, Qaitbay, built a medieval fort on the former location of the building, using some of the fallen stone. The remnants of the Pharos that were incorporated into the walls of Fort Qaitbey are clearly visible due to their excessive size in comparison to surrounding masonry. 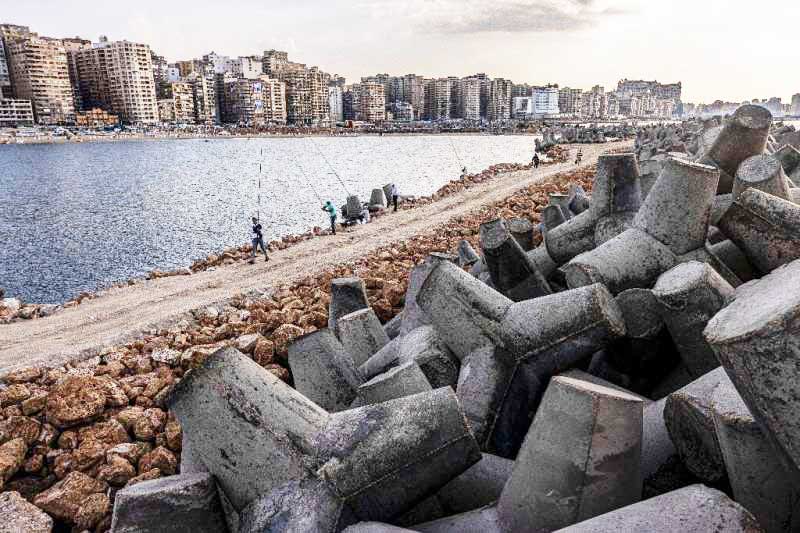 
Alexandria, Egypt's fabled second city and its biggest port, is in danger of disappearing below the waves within decades. With its land sinking, and the sea rising due to global warming, the metropolis Alexander the Great founded on the Nile Delta is teetering on the brink. Even by the United Nations' best case scenario, a third of the city will be underwater or uninhabitable by 2050, with 1.5 million of its six million people forced to flee their homes. Its ancient ruins and historic treasures are also in grave danger from the Mediterranean. Already hundreds of Alexandrians have had to abandon apartments weakened by flooding in 2015 and again in 2020. Every year the city sinks by more than three millimetres, undermined by dams on the Nile that hold back the river silt that once consolidated its soil and by gas extraction offshore. Meanwhile, the sea is rising.