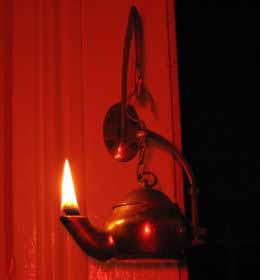 Lampadomancy, also called Lychnomancy, it is form of divination using a single oil lamp or a torch flame. As with Lychnoscopy, the diviner reads presages from the movements of the flame.

An alternate method is also practiced, consisting of of reading the spots of carbon deposited on paper sheets held over the flame.

On yet another method, the diviner uses the lamp as a means of "attracting spirits to the flames", in the hope of consulting them regarding future events. In this method, usually a specially designed lamp is employed, on the belief that grotesque forms will attract the spirits.

Lampadomancy was a popular method of divination in ancient Egypt, where diviners would perform it at midday in a darkened room illuminated by a single lamp filled with oasis oil.

The history of oil scrying can be traced back to ancient Babylonian times. Some of their magic books have survived down through the centuries with details of the methods they used.

From the Babylonians oil scrying found its way to the Egyptians and Hebrews. The most detailed examples of oil scrying are written in the Greek Magical Papyri written in Egypt between 200 B.C. and A.D. 500.

One of their techniques was called the "Princess of the Thumb" wherein a scryer anointed the forehead and thumbnail of a subject. The shiny nail acted as a magic mirror in which the scryer saw images, thought of as spirits on the other side linked to the person.

With the "Princess of the Hand" technique, oil was mixed with black soot to make a black paste that was then smeared upon the hand. The scryer then used the hand as a mirror in an attempt to scry future events.

A third type of oil scrying was called the "Princess of the Cup". Sesame seed oil was used to coat the inside of a cup that was rested on its side. The cup was used as a concave 'magic mirror' to capture and magnify the light of a candle that was fixed on its inner rim.

Sometimes oil and water mix. In oil scrying we find: