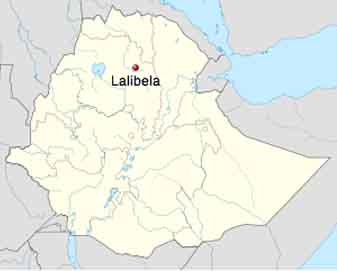 Lalibela is a town in northern Ethiopia, known for its monolithic churches. Lalibela is one of Ethiopia's holiest cities, second only to Aksum, and is a center of pilgrimage for much of the country. Unlike Aksum, the population of Lalibela is almost completely Ethiopian Orthodox Christian. The layout and names of the major buildings in Lalibela are widely accepted, especially by the local clergy, to be a symbolic representation of Jerusalem. This has led some experts to date the current form of its famous churches to the years following the capture of Jerusalem in 1187 by the Muslim soldier Saladin. 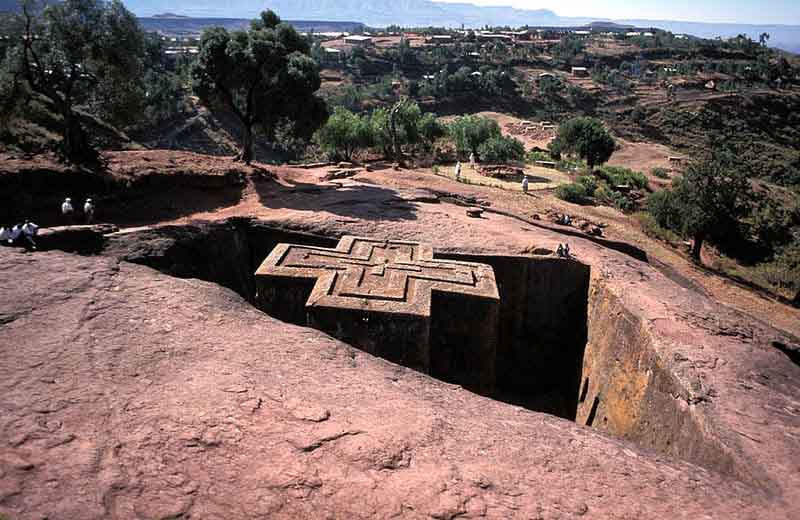 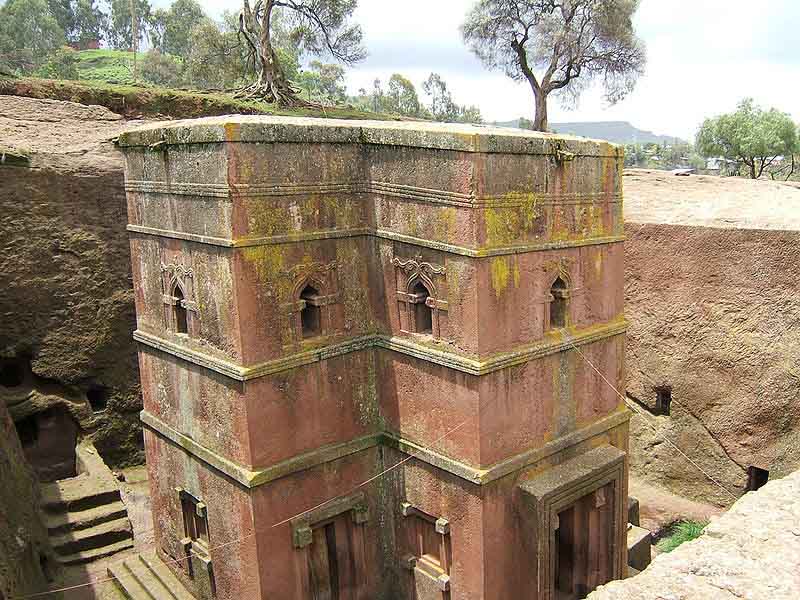 This rural town is known around the world for its churches carved from the living rock, which play an important part in the history of rock-cut architecture. Though the dating of the churches is not well established, most are thought to have been built during the reign of Lalibela, namely during the 12th and 13th centuries. There are 13 churches, assembled in four groups:

The Northern Group: Bet Medhane Alem, home to the Lalibela Cross and believed to be the largest monolithic church in the world, probably a copy of St Mary of Zion in Aksum. It is linked to Bete Maryam (possibly the oldest of the churches), Bete Golgotha (known for its arts and said to contain the tomb of King Lalibela), the Selassie Chapel and the Tomb of Adam.

The Western Group: Bete Giyorgis, said to be the most finely executed and best preserved church.

Farther afield lie the monastery of Ashetan Maryam and Yimrehane Kristos church (possibly eleventh century, built in the Aksumite fashion but within a cave).

There is some controversy as to when some of the churches were constructed. David Buxton established the generally-accepted chronology, noting that "two of them follow, with great fidelity of detail, the tradition represented by Debra Damo as modified at Yemrahana Kristos." Since the time spent to carve these structures from the living rock must have taken longer than the few decades of King Lalibela's reign, Buxton assumes that the work extended into the 14th century.

However, David Phillipson, professor of African archeology at Cambridge University, has proposed that the churches of Merkorios, Gabriel-Rufael, and Danagel were initially carved out of the rock half a millennium earlier, as fortifications or other palace structures in the waning days of the Axumite Kingdom, and that Lalibela's name simply came to be associated with them after his death. On the other hand, local historian Getachew Mekonnen credits Masqal Kibra, Lalibela's queen, with having one of the rock-hewn churches (Abba Libanos) built as a memorial for her husband after his death.

Contrary to theories advocated by writers like Graham Hancock, the great rock-hewn churches of Lalibela were not built with the help of the Knights Templar; abundant evidence exists to show that they were produced solely by medieval Ethiopian civilization.

For example, while Buxton notes the existence of a tradition that "Abyssinians invoked the aid of foreigners" to construct these monolithic churches, and admits that "there are clearly signs of Coptic influence in some decorative details" (hardly surprising given the theological, ecclesiastical, and cultural links between the Ethiopian Orthodox and Coptic Orthodox Churches), he is adamant about the native origins of these creations: "But the significant fact is remains that the rock-churches continue to follow the style of the local built-up prototypes, which themselves retain clear evidence of their basically Axumite origin."

The churches are also a significant engineering feat, given that they are all associated with water (which fills the wells next to many of the churches) exploiting an artesian geological system that brings the water up to the top of the mountain ridge on which the city rests.