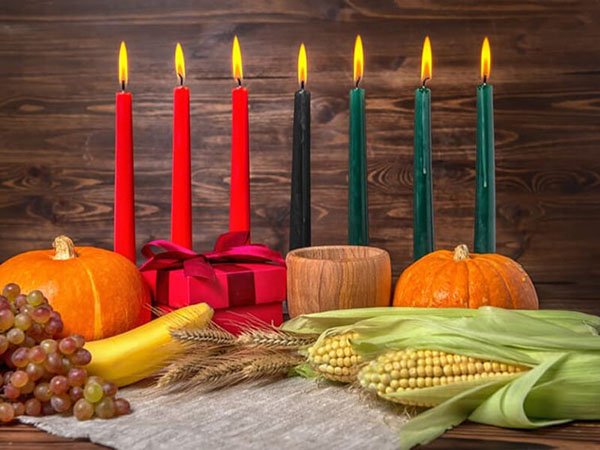 Kwanzaa is a celebration of life and the up life of human beings based on the principles of African culture. It is celebrated by some African Americans between December 26 and January 1, and is a week long celebration.

Kwanzaa was created in 1966 by Dr. Mulana Karenga/Ron Karenga (born Ron Everett), a professor and chair of the Department of Black Studies at California State University, Long Beach.

Karenga is an author and activist who stressed the indispensable need to preserve, continually revitalize and promote American culture through African rituals. Dr. Karenga is chairperson of the organization US.

Kwanzaa was established in aftermath of the Watts, California Watts Riots. This series of riots was due to police brutality viewed by citizens. Black Liberation, Black Freedom Movement the 1960s, and reflects that movement's concerns for African-American cultural groundedness in thought and practice (commonly referred to as 'black pride'), and the community and self-determination associated with this.

Kwanzaa is not a religious holiday, but a cultural one, a syncretic festival, based on various elements of the first harvest celebrations that are widely celebrated in Africa, as in the rest of the world.

Each of the days symbolizes one of the "Seven Principles (Nguzu Saba) of Blackness":

Kwanzaa (or Kwaanza) is a week-long Pan-African secular holiday primarily honoring African-American heritage. It is observed from December 26 to January 1 each year, almost exclusively in the United States. Kwanzaa consists of seven days of celebration, featuring activities such as candle-lighting and pouring of libations, and culminating in a feast and gift-giving.

Kwanzaa was founded by Ron Karenga, and first celebrated from December 26, 1966, to January 1, 1967. Karenga calls Kwanzaa the African American branch of "first fruits" celebrations of classical African cultures. It is a celebration that has its roots in the civil rights era of the 1960s, and was established as a means to help African Americans reconnect with what Karenga characterized as their African cultural and historical heritage by uniting in meditation and study around principles that have their putative origins in what Karenga asserts are "African traditions" and "common humanist principles."

In 1967, a year after Karenga proposed this new holiday, he publicly espoused the view that "Jesus was psychotic" and that Christianity was a white religion that blacks should shun. However, as Kwanzaa gained mainstream adherents, Karenga altered his position so as not to alienate practicing Christians, then stating in the 1997 Kwanzaa: A Celebration of Family, Community, and Culture, "Kwanzaa was not created to give people an alternative to their own religion or religious holiday." 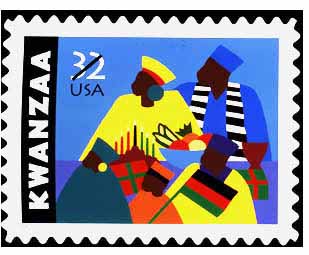 The first Kwanzaa stamp was issued by the United States Postal Service on October 22, 1067 at the Natural History Museum in Los Angeles, California. In 2004 a second Kwanzaa stamp, created by artist Daniel Minter was issued which has seven figures in colorful robes symbolizing the seven principles.

Families celebrating Kwanzaa decorate their households with objects of art, colorful African cloth, especially the wearing of the Uwole by women, and fresh fruits that represent African idealism. It is customary to include children in Kwanzaa ceremonies and to give respect and gratitude to ancestors. Libations are shared, generally with a common chalice, "Kikombe cha Umoja" passed around to all celebrants.

A model Kwanzaa ceremony is described as a ceremony which includes drumming and musical selections, libations, a reading of the "African Pledge" and the Principles of Blackness, reflection on the Pan-African colors, a discussion of the African principle of the day or a chapter in African history, a candle-lighting ritual, artistic performance, and, finally, a feast. The greeting for each day of Kwanzaa is "Habari Gani", Swahili words for "What's the News?"

At first, observers of Kwanzaa eschewed the mixing of the holiday or its symbols, values and practice with other holidays. They felt that doing so would violate the principle of kujichagulia (self-determination) and thus violate the integrity of the holiday, which is partially intended as a reclamation of important African values.

Today, many African-American families celebrate Kwanzaa along with Christmas and New Year's. Frequently, both Christmas trees and kinaras, the traditional candle holder symbolic of African-American roots, share space in kwanzaa celebrating households. To them, Kwanzaa is an opportunity to incorporate elements of their particular ethnic heritage into holiday observances and celebrations of Christmas. Read more ...