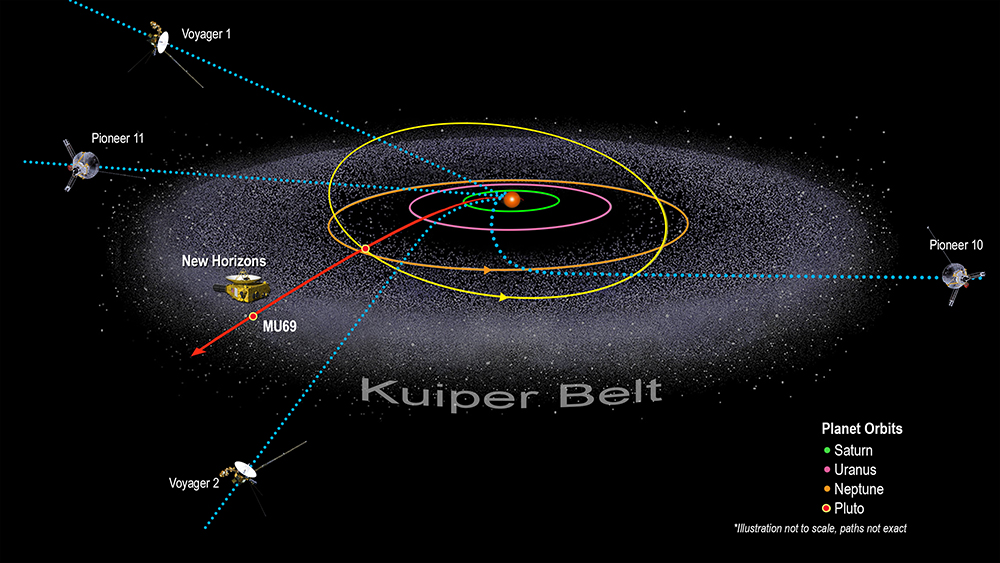 Long suspected to exist, the Kuiper belt was only discovered in 1992, by the team of David Jewitt and Jane Luu at the University of Hawaii's main telescope at Mauna Kea. Since its discovery, the number of Kuiper belt objects (KBOs) has increased to over a thousand, and more than 70,000 KBOs over 1 km in diameter are believed to reside there.

The Kuiper belt is believed to be the repository for periodic comets, those, like Halley's Comet, with orbits lasting less than 200 years. The centaurs, comet-like bodies that orbit among the gas giants, are also believed to originate there, as are the scattered disc objects such as Eris; KBO-like bodies with massive orbits that take them as far as 100 AU from the Sun. Neptune's moon Triton is believed to be a captured KBO.

Pluto, a dwarf planet, is the largest known member of the Kuiper belt. Originally considered a planet, it has many physical properties in common with the objects of the Kuiper belt, and has been known since the early 1990s to share its orbit with a number of similarly-sized KBOs, now called Plutinos. This led many astronomers to conclude that, much like Ceres before it, which was considered a planet before the discovery of its fellow asteroids, Pluto should be reclassified as a Kuiper belt object. The issue was brought to a head by the discovery of Eris, an object in the scattered disc far beyond the Kuiper belt, that is now known to be 27 percent more massive than Pluto.

In response, the International Astronomical Union (IAU), was forced to define a planet for the first time, and in so doing included in their definition that a planet must have "cleared the neighbourhood around its orbit." As Pluto shared its orbit with so many KBOs, it was deemed not to have cleared its orbit, and was thus reclassified from a planet to a member of the Kuiper belt.

The objects within the Kuiper belt, together with the members of the scattered disc extending beyond and any hypothetical Hills cloud and Oort cloud objects, are collectively referred to as trans-Neptunian.

The Kuiper belt should not be confused with the hypothesized Oort cloud, which is a thousand times more distant. Kuiper Belt Wikipedia