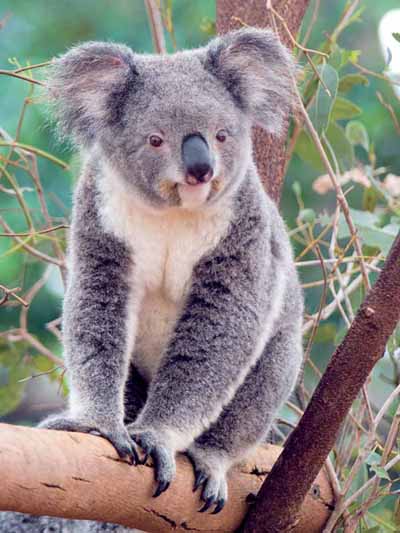 The koala (Phascolarctos cinereus) is an arboreal herbivorous marsupial native to Australia, and the only extant representative of the family Phascolarctidae.

The koala is found in coastal regions of eastern and southern Australia, from near Adelaide to the southern part of Cape York Peninsula. Populations also extend for considerable distances inland in regions with enough moisture to support suitable woodlands. The koalas of South Australia were largely exterminated during the early part of the 20th century, but the state has since been repopulated with Victorian stock. The koala is not found in Tasmania or Western Australia. 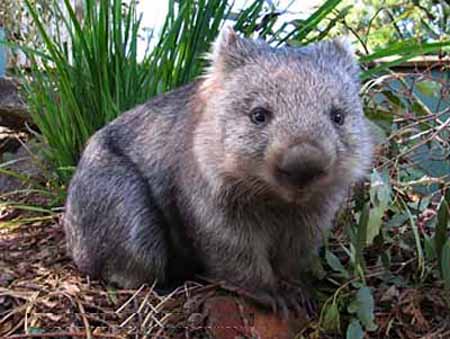 The origins of the koala are unclear, although almost certainly they descended from terrestrial wombat-like animals. Koala fossils are quite rare, but some have been found in northern Australia dating to 20 million years ago. During this time, the northern half of Australia was rainforest. The koala did not specialize in a diet of eucalyptus until the climate cooled and eucalypt forests grew in the place of rainforests. The fossil record indicates that before 50,000 years ago, giant koalas inhabited the southern regions of Australia. The koala fills the same ecological role as the sloth of South America.

The word koala comes from the Dharuk gula. Although the vowel /u/ was originally written in the Latin alphabet as "oo" (in spellings such as coola or koolah), it was changed to "oa" possibly due to an error. The word is erroneously said to mean "doesn't drink".

The scientific name of the koala's genus, Phascolarctos, is derived from Greek phaskolos "pouch" and arktos "bear". Its species name, cinereus, is Latin and means "ash-colored".

Although the koala is not a bear, English-speaking settlers from the late 18th century first called it koala bear due to its similarity in appearance to bears. Although taxonomically incorrect, the name koala bear is still in use today outside Australia - its use is discouraged because of the inaccuracy in the name. Other descriptive English names based on "bear" have included monkey bear, native bear, and tree-bear.

Although three subspecies have been described, these are arbitrary selections from a cline and are not generally accepted as valid. Following Bergmann's Rule, southern individuals from the cooler climates are larger.

A typical Victorian koala (formerly P. cinereus victor) has longer, thicker fur, is a darker, softer grey, often with chocolate-brown highlights on the back and forearms, and has a more prominently light-colored ventral side and fluffy white ear tufts.

Typical and New South Wales koala weights are 12 kg (26 lb) for males and 8.5 kg (19 lb) for females. In tropical and sub-tropical Queensland, however, the koala is smaller (at around 6.5 kg (14 lb) for an average male and just over 5 kg (11 lb) for an average female), a lighter often rather scruffy grey in color, and has shorter, thinner fur.

In Queensland, the koala was previously classified as the subspecies P. cinereus adustus, and the intermediate forms in New South Wales as P. cinereus cinereus.

A fourth variation, though not technically a subspecies, is Phascolarctos cinereus aurum, or in English "golden koala," which has a slight golden tinge to the fur as a result of an absence of the melanin pigment that produces albinism in most other mammalian species.

The variation from one form to another is continuous and there are substantial differences between individual koalas in any given region such as hair color.

The koala is broadly similar in appearance to the wombat (its closest living relative), but has a thicker coat, much larger ears, and longer limbs. The koala has large, sharp claws to assist with climbing tree trunks.

Weight varies from about 14 kg (31 lb) for a large southern male, to about 5 kg (11 lb) for a small northern female. The koala's five fingers include two opposable thumbs, providing better gripping ability. The first two fingers are positioned in apposition on the front paws, and the first three fingers for the hind paws.

The koala is one of the few mammals (other than primates) that has fingerprints. Koala fingerprints are similar to human fingerprints; even with an electron microscope, it can be quite difficult to distinguish between the two.

The teeth of the koala are adapted to their herbivorous diet, and are similar to those of other diprotodont marsupials, such as kangaroos and wombats. They have sharp incisors to clip leaves at the front of the mouth, separated from the grinding cheek teeth by a wide diastema.

The male koala, like many marsupials, has a bifurcated penis. The female has two lateral vaginas and two separate uteri, which is common to all marsupials.

The brain in the ancestors of the modern koala once filled the whole cranial cavity, but has become drastically reduced in the present species, a degeneration scientists suspect is an adaptation to a diet low in energy.

One of the smallest in marsupials with no more than 0.2% of its body weight, about 40% of the cranial cavity is filled with cerebrospinal fluid, while the brain's two cerebral hemispheres are like "a pair of shriveled walnut halves on top of the brain stem, in contact neither with each other nor the bones of the skull. It is the only animal on Earth with such a strangely reduced brain."

It is generally a silent animal, but males have a very loud advertising call that can be heard from almost a kilometre away during the breeding season. When under stress, koalas may issue a loud cry, which has been reported as similar to that of a human baby. There is little reliable information about the lifespan of the koala, but in captivity they have been observed to reach the age of 18 years.

Koalas walk on all four legs when walking on the ground,
joey clinging to the back. 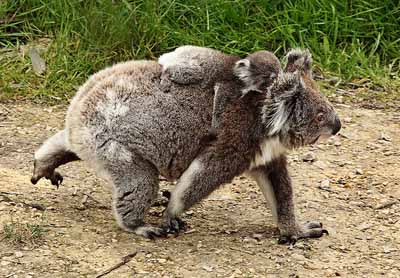 Females reach maturity at 2 to 3 years of age, males at 3 to 4 years. A healthy female koala can produce one young each year for about 12 years. Gestation is 35 days. Twins are very rare; the world's first confirmed identical twin koalas, named "Euca" and "Lyptus", were born at the University of Queensland in April, 1999. Mating normally occurs between December and March, the Southern Hemisphere's summer.

A baby koala is referred to as a joey and is hairless, blind, and earless. At birth the joey, only a quarter of an inch long, crawls into the downward-facing pouch on the mother's belly (which is closed by a drawstring-like muscle that the mother can tighten at will) and attaches itself to one of the two teats.

Young remain hidden in the pouch for about six months, only feeding on milk. During this time they grow ears, eyes, and fur. The joey then begins to explore outside of the pouch. At about this stage it begins to consume small quantities of the motherŐs "pap" (formerly thought to be excrement, but now thought to come from the mother's cecum) in order to inoculate its gut with the microbes necessary to digest eucalypt leaves.

The joey will remain with its mother for another six months or so, riding on her back, and feeding on both milk and eucalypt leaves until weaning is complete at about 12 months of age. Young females disperse to nearby areas at that time; young males often stay in the mother's home range until they are two or three years old. Read more