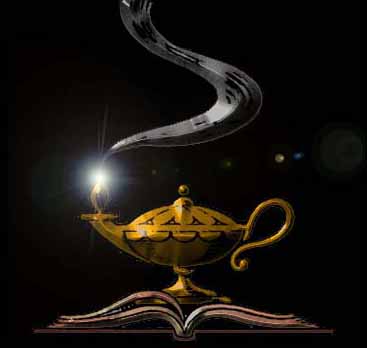 Jinn derives from the Arabic meaning 'to hide' or 'be hidden'. It is the English term for the Arabic Jinni or Djinni an alleged race of spirits. Jinn or genies are supernatural creatures in Arab folklore and Islamic teachings which occupy a parallel world to that of mankind. Together, jinn, humans and angels make up the three sentient creations of Allah. According to the Qur'an, there are two creations that have free will humans and jinn. Religious sources say barely anything about them; however, the Qur'an mentions that jinn are made of smokeless flame or "scorching fire". Like human beings, the jinn can also be good, evil, or neutrally benevolent. The jinn are mentioned frequently in the Qur'an, and there is a surah entitled Surat al-Jinn in the Quran. 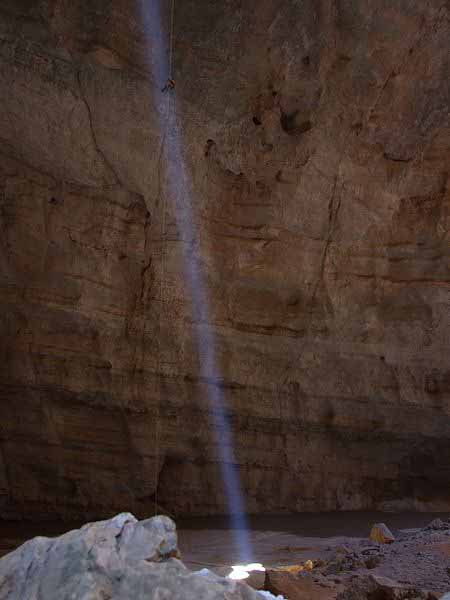 The Majlis al-Jinn cave in Oman, literally "Meeting place of the Jinn".
It is one of the world's biggest cave chambers.


Jinn in the Pre-Islamic Era

Amongst archaeologists dealing with ancient Middle Eastern cultures, any spirit lesser than angels is often referred to as a jinni, especially when describing stone carvings or other forms of art.

Inscriptions found in Northwestern Arabia seem to indicate the worship of jinn, or at least their tributary status. For instance, an inscription from Beth Fasi'el near Palmyra pays tribute to the "Jinnaye", the "good and rewarding gods".

Types of jinn include the shaytan the ghoul the marid, the 'ifrit, and the jinn. According to the information in the Arabian Nights, 'ifrits seem to be the strongest form of jinn, followed by marids, and then the rest of the jinn forms.

In Islamic theology jinn are said to be creatures with free will, made from smokeless fire by Allah as humans were made of clay. According to the Qur'an, Jinn have free will, and Iblis (the devil) abused this freedom in front of Allah by refusing to bow to Adam when Allah ordered angels and jinn to do so. For disobeying Allah, he was expelled from Paradise and called "Shaytan" (Satan).

Jinn are frequently mentioned in the Qur'an: Surah 72 named Surat al-Jinn (Angels) is named after the Jinn, and has a passage about them. Another surah (Surat al-Nas (Mankind) mentions jinn in the last verse. The Qur'an also mentions that Muhammad was sent as a prophet to both "humanity and the jinn," and that prophets and messengers were sent to both communities.

Similar to humans, jinn have free will allowing them to do as they choose (such as follow any religion). They are usually invisible to humans, and humans do not appear clearly to them. Jinn have the power to travel large distances at extreme speeds and are thought to live in remote areas, mountains, seas, trees, and the air, in their own communities. Like humans, jinn will also be judged on the Day of Judgment and will be sent to Paradise or Hell according to their deeds.

The Last Judgment, Final Judgment, Day of Judgment, Judgment Day, or The Day of the Lord in Christian theology, is the final and eternal judgment by God of every nation. The concept is found in all the Canonical gospels, particularly the Gospel of Matthew. It will take place after the resurrection of the dead and the Second Coming of Christ (Revelation 20:12ą15).

he social organization of the jinn community resembles that of humans; e.g., they have kings, courts of law, weddings, and mourning rituals.

A few traditions (hadith), divide jinn into three classes: those who have wings and fly in the air, those who resemble snakes and dogs, and those who travel about ceaselessly.

Other reports claim that 'And Allah ibn Mas'ud (d. 652), who was accompanying Muhammad when the jinn came to hear his recitation of the Qur'an, described them as creatures of different forms; some resembling vultures and snakes, others tall men in white garb.

They may even appear as dragons, onagers (small horse), or a number of other animals. In addition to their animal forms, the jinn occasionally assume human form to mislead and destroy their human victims.

Certain hadiths (narrations by Muhammed) have also claimed that the jinn may subsist on bones, which will grow flesh again as soon as they touch them, and that their animals may live on dung, which will revert to grain or grass for the use of the jinn flocks.

Ibn Taymiyyah, an Islamic scholar, believed the jinn were generally "ignorant, untruthful, oppressive and treacherous". They account for much of the "magic" perceived by humans, cooperating with magicians to lift items in the air unseen, delivering hidden truths to fortune tellers, and mimicking the voices of deceased humans during seances.

A related belief is that every person is assigned one's own special jinni, also called a qarin, (spirit) of the jinn that whisper to people's souls and tell them to submit to evil desires. The notion of a qarin is not universally accepted amongst all Muslims, but it is generally accepted that Shaytan (Devil) whispers in human minds, and he is assigned to each human being. However, even Muhammad was said to possess a qarin which after seeking help of God, became a Muslim and behave only good. The jinn were made to serve Allah, though Iblis is amongst them.


Relationship of King Solomon and the Genies

According to traditions, the jinn stood behind the learned humans in Solomon's court, who in turn, sat behind the prophets. The jinn remained in the service of Solomon, who had placed them in bondage, and had ordered them to perform a number of tasks.

"And before Solomon were marshalled his hosts,- of jinn and men and birds, and they were all kept in order and ranks." (Quran 27:17)

The Qur'an relates that Solomon died while he was leaning on his staff. As he remained upright, propped on his staff, the jinn thought he was still alive and supervising them, so they continued to work. They realized the truth only when God sent a creature to crawl out of the ground and gnaw at Solomon's staff until his body collapsed. The Qur'an then comments that if they had known the unseen, they would not have stayed in the humiliating torment of being enslaved.

"Then, when We decreed (Solomon's) death, nothing showed them his death except a little worm of the earth, which kept (slowly) gnawing away at his staff: so when he fell down, the jinn saw plainly that if they had known the unseen, they would not have tarried in the humiliating Penalty (of their Task)." Qur'an 34:14)


Existence and Usage of Jinn in Other Cultures

In Guanche (aboriginal people of the Canary Islands) mythology from Tenerife, there existed the belief in beings that are similar to genies, such as the maxios (benevolent minor gods or genies ) or dioses paredros ('attendant gods', domestic and nature spirits) and tibicenas (evil genies), as well as the demon Guayota (aboriginal god of evil) that, like the Arabic Iblis, is sometimes identified with a genie.

In Judeo-Christian tradition, the word or concept of jinn as such does not occur in the original Hebrew text of the Bible, but the Arabic word jinn is often used in several old Persian and Arabic translations.

In several verses in those Arabic and Persian translations, the word Jinn are mentioned as translations of familiar spirit or (obe) for Jann and the devil or for Iblis.

Evil Ifrit in The Book of One Thousand and One Nights are called "the seed of Iblis".

The Spirit of the Lamp in the story of Aladdin was such a jinni, bound to an oil lamp. Ways of summoning jinn were told in The Thousand and One Nights: by writing the name of God in Hebraic characters on a knife (whether the Hebrew name for God, Yaweh, or the Arabic Allah is used is not specified), and drawing a diagram (possibly a pentagram) and strange symbols and incantations around it.

The jinn's power of possession was also addressed in the fictional Nights. It is said that by taking seven hairs out of the tail of a cat that was all black except for a white spot on the end of its tail, and then burning the hairs in a small closed room with the possessed, filling their nose with the scent, this would release them from the spell of the jinn inside them.


Jinn in the Occult

In sorcery books Jinn are classified into four races after the classical elements, Earth, Air, Fire; (Ifrit) and Water; (Marid) and presumed to live in them. They are collected in tribes, usually seven, each with a king. Each king controls his tribe and is controlled by an Angel. The Angel's name is torture to the jinn king as well as his specific tribe.

Unlike white and evil witches, Jinn have free will; yet, they could be compelled to perform both good and evil acts. In contrast a demon would only hurt creatures, and an angel would only have benevolent intentions (white witchcraft). Knowing what to ask a spirit to perform is key, as asking a spirit to perform a chore that runs counter to its natural tendencies could possibly anger the spirit into retaliating against the sorcerer.

The Western interpretation of the genie is based on the Aladdin tale in the Western version of The Book of One Thousand and One Nights, which told of a genie that lived in an oil lamp and granted wishes to whoever freed him from the lamp by polishing it. The number and frequency of wishes varies, but typically it is limited to three wishes. More mischievous genies may take advantage of poorly worded wishes (including the Fairly Odd Parents and in an episode of The X-Files).

Many stories about genies tend to follow the same vein as the famous short story The Monkey's Paw by W. W. Jacobs, with the overriding theme of "be careful what you wish for"; in these stories, wishes can have disastrous, horrific and sometimes fatal consequences. Often, the genie causes harm to the loved ones or innocent people surrounding the wisher, making others pay for its master's greed or ignorance.

Exploiting loopholes or twisting interpretations of wishes is a classic trait amongst genies in Western fiction. For example, in "The Man in the Bottle" episode of The Twilight Zone, a poor shopkeeper who finds a genie wishes to become a leader of a great nation - and is transformed into Adolf Hitler at the very end of World War II. Often, these stories end with the genie's master wishing to have never found the genie, all his previous wishes never to have happened, or a similar wish to cancel all the fouled wishes that have come before.

Until 2005, the Djinn was one of many mythical creatures to be used as a Brownie patrol. When the Girl Guides of Canada updated the Brownie program in 2005, they decided that Djinns were an improper use of an Islamic cultural icon and made the decision to remove Djinni from the program. 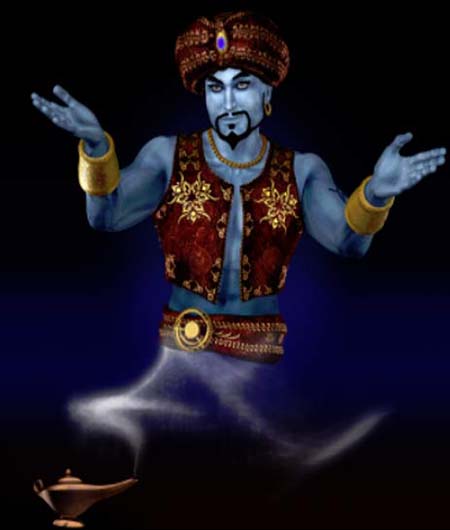 Jinn: Tales of Wish Masters Throughout Time   Ancient Origins - January 10, 2016
Like many other beings, jinn can be either male and female. Also, jinn can exist independently or they can attach themselves to inanimate objects, especially old objects in which they can reside and together with which they can travel. For example, it was believed that jinn could become attached to precious or semi-precious stones such as opals.

In the Middle East, archaeologists have found evidence from the pre-Islamic era which suggested that during that time, there was no clear distinction between spirits inferior to angels and jinn. In north-west Arabia, archaeological evidence has also clearly suggested the worship of jinn. In a region near Palmyra, an unearthed inscription called jinn 'the good and rewarding gods', but despite all archaeological evidence regarding jinn worship, the Quran rejects this practice arguing that Allah is the only one who is to be revered and worshiped.