Jason is a hero of Greek mythology who lead a group called the Argonauts in the search of the Golden Fleece. His father was Aeson, the rightful king of Iolcus. Pelias, Aeson's half-brother, was power-hungry and wished to gain dominion over all of Thessaly. Pelias was the product of a union between their shared mother Tyro ("high born Tyro") daughter of Salmoneus, and the sea god Poseidon. In a bitter feud, he overthrew Aeson (the rightful king), killing him and hopefully his descendants, who might take revenge on him.

Alcimede, Aeson's wife already had an infant son by Aeson, Jason who she sent to the centaur (half man, half horse) Cheiron for education, for fear that Pelias would kill him. She then claimed that Jason had been killed (circumstances unclear). Pelias, still paranoid that he would one day be overthrown, consulted an oracle which warned him to beware a man coming forth from the people with only one sandal.

Many years later, Pelias was holding games in honor of the sea god and his alleged father, Poseidon, when Jason arrived in Iolcus and lost one of his sandals in the river Anauros ("wintry Anauros"), while helping an old woman (Goddess Hera in disguise) cross. She blessed him for she knew, as goddesses do, what Pelias was up to.

When Jason entered Iolcus, he was announced as a man wearing one sandal. Paranoid, Pelias asked him what he (Jason) would do if confronted with the man who would be his downfall. Jason responded that he would send that man after the Golden Fleece. Pelias took that advice and sent Jason to retrieve the Golden Fleece as he thought it an impossible mission for this young lad that stood before him. (Jason was supposed to have been in his late teens or early twenties at the time).

Jason assembled a great group of heroes and a huge ship called the Argo. Together, the heroes were known as the Argonauts. They included the Boreads, Heracles, Peleus, Telamon, Orpheus, Castor and Polydeuces, Atalanta and Euphemus.

Jason sent his invitation to all the adventurous young men of Greece, and soon found himself at the head of a band of bold youths, many of whom afterwards were renowned among the heroes and demigods of Greece. Hercules, Theseus, Orpheus, and Nestor were among them. They were called the Argonauts, from the name of their vessel.

The Argo, with her crew of heroes, left Thessaly and having touched at the Island of Lemnos, thence crossed to Mysia and thence to Thrace . Here they found the sage Phineus, and from him received instruction as to their future course. It seems the entrance of the Euxine Sea was impeded by two small rocky islands, which floated on the surface, and in their tossings and heavings occasionally came together, crushing and grinding to atoms any object that might be caught between them. They were called the Symplegades, or Clashing Islands.

Phineus instructed the Argonauts how to pass this dangerous strait. When they reached the islands they let go a dove, which took her way between the rocks, and passed in safety, only losing some feathers of her tail. Jason and his men seized the favorable moment of the rebound, plied their oars with vigour, and passed safe through, though the islands closed behind them, and actually grazed their stern. They now rowed along the shore till they arrived at the eastern end of the sea, and landed at the kingdom of Colchis.

Jason made known his message to the Colchian king, AEetes, who consented to give up the golden fleece if Jason would yoke to the plough two fire-breathing bulls with brazen feet, and sow the teeth of the dragon which Cadmus had slain, and from which it was well known that a crop of armed men would spring up, who would turn their weapons against their producer.

Jason accepted the conditions, and a time was set for making the experiment. Previously, however, he found means to plead his cause to Medea, daughter of the king. He promised her marriage, and as they stood before the altar of Hecate, called the goddess to witness his oath.

Medea yielded, and by her aid, for she was a potent sorceress, he was furnished with a charm, by which he could encounter safely the breath of the fire-breathing bulls and the weapons of the armed men.

At the time appointed, the people assembled at the grove of Mars (Ares), and the king assumed his royal seat, while the multitude covered the hill-sides. The brazen-footed bulls rushed in, breathing fire from their nostrils that burned up the herbage as they passed. The sound was like the roar of a furnace, and the smoke like that of water upon quick-lime.

Jason advanced boldly to meet them. His friends, the chosen heroes of Greece, trembled to behold him. Regardless of the burning breath, he soothed their rage with his voice, patted their necks with fearless hand, and adroitly slipped over them the yoke, and compelled them to drag the plough.

The Colchians were amazed; the Greeks shouted for joy.

Jason next proceeded to sow the dragon's teeth and plough them in. And soon the crop of armed men sprang up, and, wonderful to relate! no sooner had they reached the surface than they began to brandish their weapons and rush upon Jason. The Greeks trembled for their hero, and even she who had provided him a way of safety and taught him how to use it, Medea herself, grew pale with fear.

Jason for a time kept his assailants at bay with his sword and shield, till, finding their numbers overwhelming, he resorted to the charm which Medea had taught him, seized a stone and threw it in the midst of his foes. They immediately turned their arms against one another, and soon there was not one of the dragon's brood left alive. The Greeks embraced their hero, and Medea, if she dared, would have embraced him too.

It remained to lull to sleep the dragon that guarded the fleece, and this was done by scattering over him a few drops of a preparation which Medea had supplied. At the smell he relaxed his rage, stood for a moment motionless, then shut those great round eyes, that had never been known to shut before, and turned over on his side, fast asleep. 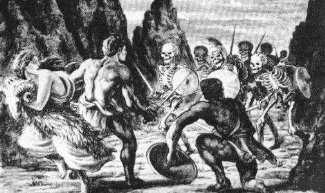 Jason seized the fleece and with his friends and Medea accompanying, hastened to their vessel before AEetes the king could arrest their departure, and made the best of their way back to Thessaly, where they arrived safely.

Jason delivered the fleece to Pelias, and dedicated the Argo to Neptune (Poseidon).

What became of the fleece afterwards we do not know, but perhaps it was found after all, like many other golden prizes, not worth the trouble it had cost to procure it.