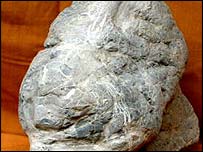 Archaeologist claims to have found some of the oldest artwork ever - carved faces 200,000 years old. The human images were found in 2001 by Pietro Gaietto on an expedition through the Borzonasca district of Italy. He claims the rock has been sculpted into faces that look in opposite directions; one is bearded with what Gaietto calls an "expressive face". If this is genuine, the artist would have been an extinct human species that died out about 150,000 years ago.

Local inhabitants say that prehistoric human faces are nothing new to the region and point to a rock cliff that they believe has been sculpted. They call it the Face of Borzone.

In 2001, in a pile of rubble collected for use as building material, Pietro Gaietto, from the Museum of the Origins of Man, saw something unusual in one particular head-sized rock. Pietro Gaietto says it shows two heads, facing outwards and joined at the neck. One of the faces is bearded; the other is beardless.

Conceptual thought "It has a very expressive face," he says. "The beardless face has two eyes, a mouth and a wide nose." He says close inspection of the rock reveals that it has been carved and knocked into shape. Gaietto believes the sculpture is 200,000 years old, and would have been used in rituals. He says it would have been made by an extinct species of human called Homo erectus, of which there is evidence in the region.

Gaietto's claims are controversial because hominids such as Homo erectus are not thought to have been capable of the symbolic thought needed to create art.

The earliest examples of human artwork that scientists feel confident to describe as such are all less than 100,000 years old. The most notable items are probably the 70,000-year-old engraved ochre pieces found in the Blombos Cave of South Africa. But there are items some researchers have claimed to be art that are even older than the faces of Borzonasca. The so-called Tan-Tan object unearthed in Morocco in 1999 is said to be a 400,000-year-old sculpted figurine. Mainstream science, however, believes these items are not man-made at all. It argues the distinctive features have very probably been moulded by geological processes.