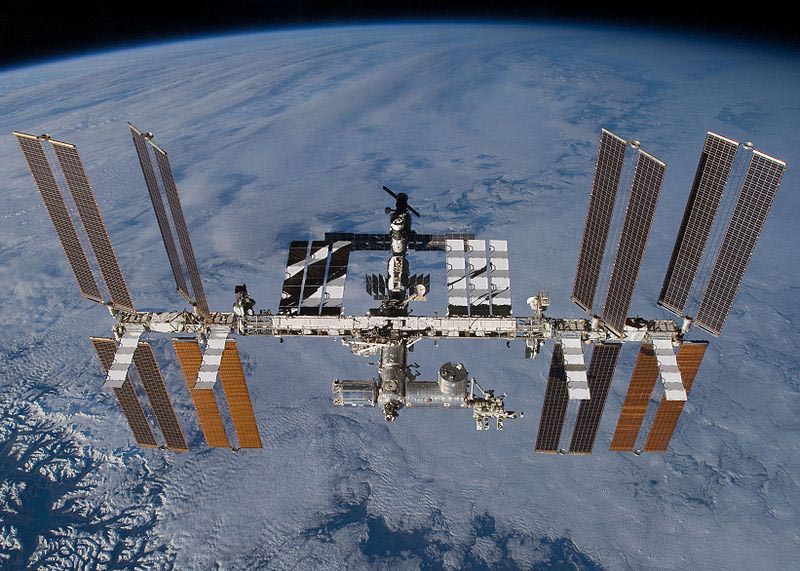 The International Space Station (ISS) is a space station, or a habitable artificial satellite, in low Earth orbit. Its first component launched into orbit in 1998, the last pressurised module was fitted in 2011, and the station is expected to be used until 2028. Development and assembly of the station continues, with components scheduled for launch in 2018 and 2019. The ISS is the largest human-made body in low Earth orbit and can often be seen with the naked eye from Earth. The ISS consists of pressurised modules, external trusses, solar arrays, and other components. ISS components have been launched by Russian Proton and Soyuz rockets, and American Space Shuttles.

The ISS serves as a microgravity and space environment research laboratory in which crew members conduct experiments in biology, human biology, physics, astronomy, meteorology, and other fields. The station is suited for the testing of spacecraft systems and equipment required for missions to the Moon and Mars.[14] The ISS maintains an orbit with an altitude of between 330 and 435 km (205 and 270 mi) by means of re-boost maneuvres using the engines of the Zvezda module or visiting spacecraft. It completes 15.54 orbits per day.

The ISS program is a joint project among five participating space agencies: NASA, Roscosmos, JAXA, ESA, and CSA. The ownership and use of the space station is established by intergovernmental treaties and agreements. The station is divided into two sections, the Russian Orbital Segment (ROS) and the United States Orbital Segment (USOS), which is shared by many nations. As of January 2014, the American portion of ISS is being funded until 2024. Roscosmos has endorsed the continued operation of ISS through 2024 but has proposed using elements of the Russian Orbital Segment to construct a new Russian space station called OPSEK.

The ISS is the ninth space station to be inhabited by crews, following the Soviet and later Russian Salyut, Almaz, and Mir stations as well as Skylab from the US. The station has been continuously occupied for 17 years and 73 days since the arrival of Expedition 1 on 2 November 2000. This is the longest continuous human presence in low Earth orbit, having surpassed the previous record of 9 years and 357 days held by Mir. The station is serviced by a variety of visiting spacecraft: the Russian Soyuz and Progress, the American Dragon and Cygnus, the Japanese H-II Transfer Vehicle, and formerly the Space Shuttle and the European Automated Transfer Vehicle. It has been visited by astronauts, cosmonauts and space tourists from 17 different nations.

On 28 March 2015, Russian sources announced that Roscosmos and NASA had agreed to collaborate on the development of a replacement for the current ISS.[ NASA later issued a guarded statement expressing thanks for Russia's interest in future co-operation in space exploration but fell short of confirming the Russian announcement. Read more