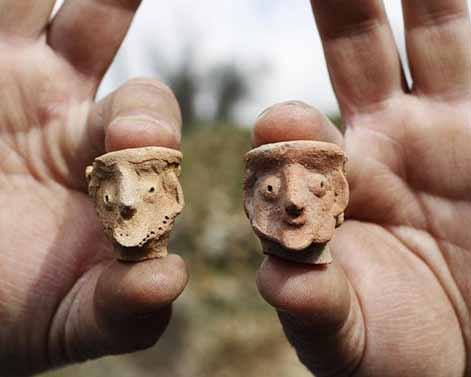 These figurines closely resemble the Anunnaki. 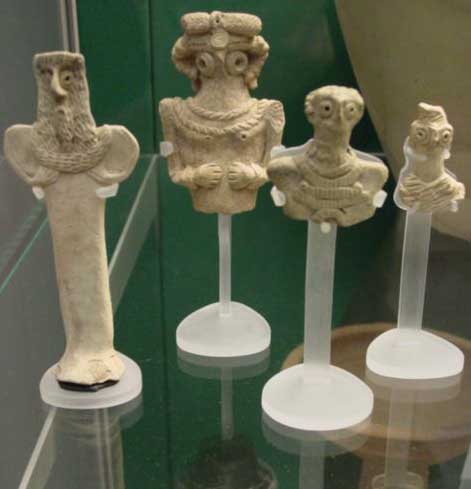 Israelis find 2,750-year-old temple   MSNBC - December 27, 2012
Archaeologists have uncovered a 2,750-year-old temple near Jerusalem, along with pottery and clay figurines that suggest the site was the home base for a ritual cult, the Israeli Antiquities Authority said Wednesday. The discovery was made during excavations at the Tel Motza archaeological site, about 3 miles (5 kilometers) west of Jerusalem, during preparations for work on a new section of Israeli's Highway 1, the agency said in a statement.

"The ritual building at Tel Motza is an unusual and striking find, in light of the fact that there are hardly any remains of ritual buildings of the period in Judaea at the time of the First Temple," excavation directors Anna Eirikh, Hamoudi Khalaily and Shua Kisilevitz were quoted as saying in the statement.

The Bible says the First Temple was built in Jerusalem by Solomon, son of King David, and archaeologists estimate that construction was undertaken in the 10th century B.C. The excavation's directors say the Tel Motza temple must have been active in an era "prior to the religious reforms throughout the kingdom at the end of the monarchic period (at the time of Hezekiah and Isaiah), which abolished all ritual sites, concentrating ritual practices solely at the Temple in Jerusalem."

Tel Motza was thought to be associated with the ancient settlement called "Mozah" in the Book of Joshua. During previous work, archaeologists uncovered a large structure with storehouses and a number of silos. They said that structure might have served as a storage facility for Jerusalem's grain supplies.

The newly discovered structure has massive walls and a wide, east-facing entrance, conforming to the tradition of temple construction at the time, the site directors said. "The rays of the sun rising in the east would have illuminated the object placed inside the temple first, symbolizing the divine presence within," they said.

Inside the temple, archaeologists found what appeared to be a square altar, with a cache of ritual items nearby. Those items included fragments of pottery chalices, decorated ritual pedestals and two types of pottery figurines. Some of the figurines represented animals - mainly horses in harnesses - while others were humanlike heads with curling hair and flat headdresses. Such figurines hint at the influence of Philistine coastal culture.

"The find of the sacred structure, together with the accompanying cache of sacred vessels, and especially the significant coastal influence evident in the anthropomorphic figurines, still require extensive research," the directors said.