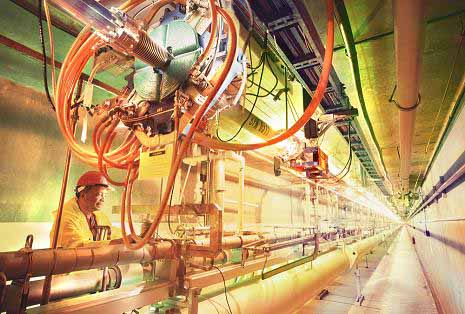 A linear particle accelerator (also called a linac) is an electrical device for the acceleration of subatomic particles. This sort of particle accelerator has many applications, from the generation of X-rays in a hospital environment, to an injector into a higher energy synchrotron at a dedicated experimental particle physics laboratory. The design of a linac depends on the type of particle that is being accelerated: electron, proton or ion. They range in size from a cathode ray tube to the 2-mile long Stanford Linear Accelerator Center in California.

It is planned to have a collision energy of 500 GeV initially, and, if approved, to be completed in the late 2010s. A later upgrade to 1000 GeV is possible. As of September 2008, the host country of the accelerator has not been chosen. A competitive design known as CLIC is also underway; it seems unlikely that both machines will be built. Funding has been pulled for the project by many countries and the project is largely considered cancelled. The ILC would collide electrons with positrons. It will be between 30 km and 50 km (19-25 mi.) long, more than 10 times as long as the 50 GeV Stanford Linear Accelerator, the longest existing linear particle accelerator.

Comparison with the Large Hadron Collider

There are two basic shapes of accelerators. Linear accelerators ("linacs") accelerate elementary particles along a straight path. Circular accelerators, such as the Tevatron, the LEP, and the Large Hadron Collider (LHC), use circular paths. Circular geometry has significant advantages at energies up to and including tens of GeV: With a circular design, particles can be effectively accelerated over longer distances.

Also, only a fraction of the particles brought onto a collision course actually collide. In a linear accelerator, the remaining particles are lost; in a ring accelerator, they keep circulating and are available for future collisions. The disadvantage of circular accelerators is that particles moving along bent paths will necessarily emit electromagnetic radiation known as synchrotron radiation.

Energy loss through synchrotron radiation is inversely proportional to the mass of the particles in question. That is why it makes sense to build a hadron collider such as the LHC for protons or, alternatively, for lead nuclei, as a ring collider, an electron-positron collider of the same size would never be able to achieve the same collision energies, as the synchrotron radiation losses would be too great.

Even if the effective collision energy at the LHC will be higher than the ILC collision energy (14,000 GeV for the LHC vs. ~500 GeV for the ILC), measurements could be made more accurately at the ILC. Collision between electrons and positrons are much simpler to analyze than collisions between many quarks, antiquarks and gluons. As such, one of the roles of the ILC would be making precision measurements of the properties of particles discovered at the LHC.

It is widely expected that effects of physics beyond that described in the current Standard Model will be detected by experiments at the LHC and ILC. In addition, particles and interactions described by the Standard Model are expected to be discovered and measured. At the ILC physicists hope to be able to:

Merging of regional proposals into a worldwide project

In August 2004, the International Technology Recommendation Panel (ITRP) recommended a Superconducting RF technology for the accelerator. After this decision the three existing linear collider projects - the Next Linear Collider (NLC), the Global Linear Collider (GLC) and Teraelectronvolt Energy Superconducting Linear Accelerator (TESLA) - joined their efforts into one single project (the ILC). Physicists are now working on the detailed design of the accelerator. Steps ahead include obtaining funding for the accelerator, and choosing a site. On 8 February 2007 the Draft Reference Design Report for the ILC was released.

The electron source for the ILC will use 2-nanosecond laser light pulses to eject electrons from a photocathode, a technique allowing for up to 80% of the electrons to be polarized; the electrons then will be accelerated to 5 GeV in a 250-meter linac stage. Synchrotron radiation from high energy electrons will produce electron-positron pairs on a titanium-alloy target, with as much as 60% polarization; the positrons from these collisions will be collected and accelerated to 5 GeV in a separate linac.

To compact the 5 GeV electron and positron bunches to a sufficiently small size to be usefully collided, they will circulate for 0.2 seconds in a pair of damping rings, 7 km in circumference, in which they will be reduced in size to a few mm in length and less than 100 um diameter.

From the damping rings the particle bunches will be sent to the Superconducting RF main linacs, each 12 km long, where they will be accelerated to 250 GeV. At this energy each beam will have an average power of about 10 megawatts. Five bunch trains will be produced and accelerated per second.

After acceleration the bunches will be focused to a few nm in height and a few hundred nm in width. The focused bunches then will be collided inside two large particle detectors.

The Draft Reference Design Report estimates the cost of building the ILC, excluding R&D, prototyping, land acquisition, underground easement costs, detectors, contingencies, and inflation, at US$6.65 billion. From formal project approval, completion of the accelerator complex and detectors is expected to require seven years. The host country would be required to pay $1.8 billion for site-specific costs like digging tunnels and shafts and supplying water and electricity. 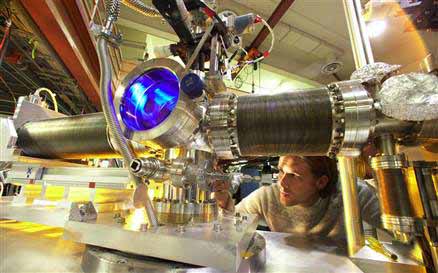 Most atom smashers are built like racetracks, with powerful magnets bending subatomic particles into circular routes. The SLAC National Accelerator Laboratory, built in the heart of California's Silicon Valley, is something completely different: It's basically a 2-mile-long dragstrip that whips up electrons to shed light on the structure of matter.

SLAC's straight-shot structure hints at the shape of atom smashers to come - such as the future International Linear Collider. And it makes for one heck of a jogging trail. "There's actually a race where they go down to the accelerator and back - it's four miles," said SLAC graduate student Chris McGuinness, who is an avid mountain climber as well as a researcher working on the next generation of laser-powered particle accelerators. Next month's 37th annual SLAC Run and Walk will take place outside the accelerator's housing. But at the same time, 25 feet beneath the surface, electrons and positrons will be running their own races down SLAC's straight track.

At the end of the track, those pumped-up particles can be curled around and smashed together, or they can be captured in a magnetic ring to generate brilliant flashes of X-ray light. The smashing part has supported Nobel-winning discoveries, including this year's physics prize, but the flashing part is pointing the way to SLAC's next frontier.

The housing for the SLAC National Accelerator Laboratory's 2-mile-long tunnel shows up as a straight line in this aerial photo of the Silicon Valley site.

SLAC is definitely in a time of transition, in part evidenced by this month's official name change: For the past 46 years, it's been known as the Stanford Linear Accelerator Center. Today, Stanford University still manages the lab on behalf of the U.S. Department of Energy, but the acronym has been incorporated into a bigger mouthful of a name to recognize SLAC's growing role in photon science and astrophysics.

In particle physics, SLAC's signal accomplishments have focused on figuring out why matter is structured the way it is. "We did the first experiments that showed quarks existed," said Stanford graduate researcher Daniel Ratner.

More recently, the lab's BaBar collaboration has shed light on why matter won out over antimatter, and found the lowest-energy example of weird subatomic stuff known as "bottomonium." But BaBar's days are numbered: As the Large Hadron Collider takes center stage in particle physics, the detector system at SLAC that yielded such fundamental research (known as the B Factory) is being closed down. That's been one of the reasons why SLAC has laid off 225 of its 1,600 employees over the past year. Budget cuts forced by Congress were another factor.

The good news is that new projects are gaining steam: Scientists at SLAC play a key role in managing the recently launched $690 million Fermi Gamma-ray Space Telescope, and the $400 million Linac Coherent Light Source is due to come online next year.

SLAC's researchers provided a preview of what's ahead on Monday during a tour organized for this week's New Horizons in Science conference, which is presented annually by the Council for the Advancement of Science Writing.

The linear accelerator itself is just the start of the journey, at least as far as electrons are concerned. Although we couldn't walk through the underground accelerator hall itself, McGuinness ushered us through the above-ground Klystron Gallery.

Klystrons are essential elements that generate electromagnetic waves, like glorified microwave ovens. The energy from the barrel-sized klystrons at SLAC is funneled down waveguides to the accelerator, where they push the electrons faster down the track like ocean waves pushing a surfer toward shore.

At the end of the run, magnets divert the drag-racing electrons into the places where they're put to use - for example, the Stanford Synchrotron Radiation Lightsource, or SSRL. The heart of the facility is a warehouse-sized synchrotron ring, somewhat similar to the 17-mile-round ring used for pulsing protons at the Large Hadron Collider.

At SLAC, however, the electrons' energy isn't released by collisions. Instead, they are kept in magnetic captivity and shed their excess energy in the form of X-rays. "The only thing we're using is the energy they shed," researcher John Pople explained.

Flashes of X-rays are focused onto a wide variety of materials, and the patterns made by diffracted X-ray light can show the molecular or even the atomic structure of the material being studied: "Soft" X-rays can probe electronic properties on a scale of less than a micron (a millionth of a meter), while shorter-wavelength, "hard" X-rays can illuminate structures on a scale of less than a nanometer (a billionth of a meter).

In one of the SSRL's closet like hutches, Pople and his assistants are using hard X-rays to map the atomic structure of materials that could someday show up in a better breed of artificial corneas. At another beamline, graduate student Eric Verploegen is using soft X-rays to look at the properties of substances being considered for spray-on circuitry. The idea is to come up with flexible, organic-based electronics that could be worked into, say, combat uniforms.

Farther down a hallway, at yet another beamline, Swedish-born researcher Dennis Nordlund is working on a tangle of gleaming pipes and metal foil that could do service as an electron spectrometer. The complex plumbing is supposed to create a nearly perfect vacuum inside the instrument.

The Linac Coherent Light Source, now in the final stages of construction, will pump up electrons to such high energies that the resulting flashes of X-ray light will pack 10 gigawatts of power. When it's focused, we have no known material that will stop it from burning.

New caverns have been burrowed into the sandstone on SLAC's 430-acre campus to accommodate millions of dollars' worth of beamlines and observing instruments. Right now the caverns are empty, but starting next year, the Linac Coherent Light Source will set a new standard for imaging resolution, down to 1 angstrom, or one ten-billionth of a meter. It will also provide the shortest stop-action flash ever known, lasting as little as a femtosecond - that is, one-quadrillionth of a second.

You can think of it as an atomic-scale microscope for materials, or a flash camera capable of seeing atoms. Either way, it's a new frontier for science and technology, as important as the frontier that will be explored at the Large Hadron Collider.