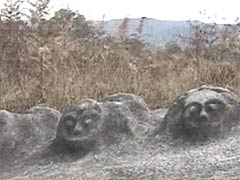 A remote rainforest in Sulawesi, Indonesia is now at the centre of a study into hundreds of mysterious stone carvings that only a few foreigners in the world have seen.

No one knows who built them or why, but the "megaliths" are believed to be built anywhere from 500 to 2,000 years ago.

There are over 400 pieces scattered around the rainforest. Till now, nobody has been able to find the tools that carved them, or any clues to who could have built them.

These carvings include birds that laugh like humans and primates three inches high, but the most mind-boggling of them all are the statues that locals say were once humans.

Local legends tell of criminals long ago turned to stone but beyond that, little is known about the megaliths of Central Sulawesi.

"As part of the punishment after he was accused of rape, he was attacked and was cut on his shoulder, and that's what this scar is, which we presume is really just a crack in the rock," said Edward Pollard of The Nature Conservancy, referring to the Tokala'ea megalith.

Park officials are trying to protect them as the national park faces the threat of an encroaching population.

And that remains the biggest mystery yet, as experts cannot relate them to anything else in the world.

While locals say some of the megaliths were coffins for nobles or cisterns for water, there is no evidence to prove either.

So anyone's guess could be the answer to the riddle of Indonesia's ancient statues.