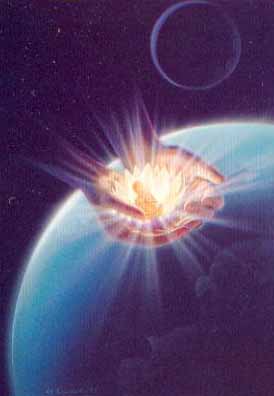 Let us not confuse children with genetically linked psychic abilities, that have always been part of the human experience, with a New Age label "Indigo Children."

Indigo Children allegedly have special psychological and spiritual attributes. The indigo child concept was first popularized by the book The Indigo Children, written by the husband and wife team of Lee Carroll and Jan Tober. He claims to have learned of the concept via conversations with a spiritual entity he calls "Kryon." The adjective "indigo" is used because it is claimed these children appear with an indigo-hued aura. There is no scientific basis whatsoever for the concept of an "aura," let alone an "indigo child".

Those who support the concept claim the proportion of 'indigos' in recent times to be very large and increasing, rising from 85% in 1992 to 95% at some point after 1994. In previous decades the proportion is claimed to have been much lower. There are, however, no verifiable statistics to back these claims up, let alone a methodology for identifying or classifying an "indigo child."

Although Carroll states that while most of the traits of indigos are physically observable (there is no evidence of this), the indigo child concept is also metaphysical in nature. Carroll describes himself as a channeller for Kryon, a supposed angelic being that he claims exists. One of the book's six chapters focuses on the supposed spiritual aspects of claimed indigos, and includes information that is best classified as new age metaphysical or pseudoscientific. Some individuals believe the "arrival" of these supposed indigo children is wholly a spiritual phenomenon, and that indigo children are supposedly the beginning of a new hybrid, possibly alien. Spiritual author Doreen Virtue has also written books on this topic and another group of children called Crystal Children - all semantics as we search for answers.

According to Carroll and Tober, "the Indigo Child is a boy or girl who displays a new and unusual set of psychological attributes, revealing a pattern of behavior generally undocumented before." They assert these children are often misdiagnosed with Attention-Deficit Disorder or Attention-Deficit Hyperactivity Disorder, and they advise parents to avoid medicating these children for that condition despite warnings from legitimate doctors. This pattern, they claim, has unique factors that call on parents and teachers to change their treatment and upbringing of these children in order to assist them in achieving balance and harmony in their lives, and to help them avoid frustration.

The title "indigo children" was originally given to people with the ten attributes described below who were mainly born in the period from 1975 through 1995. Some sources use the term "crystal children" to describe indigos at a young age (younger than age 7); and some state that the children being born today (after the year 2000) are "crystal children" who are more sensitive and spiritually connected than the indigos, who they claim are more warrior-like in nature. Carroll and Tober have not detailed why their classification is particularly more useful or accurate than approaches based on conventional child psychology and sociology; rather, they claim the list was "channeled" by Carroll from a mystical entity they call Kryon. I am not much into metaphysical channeling.

They come into the world with a feeling of royalty (and often act like it).

They have a feeling of "deserving to be here," and are surprised when others don't share that.

Self-worth is not a big issue; they often tell the parents "who they are."

They have difficulty with absolute authority (authority without explanation or choice).

They simply will not do certain things; for example, waiting in line is difficult for them.

They get frustrated with systems that are ritually oriented and don't require creative thought.

They often see better ways of doing things, both at home and in school, which makes them seem like "system busters" (nonconforming to any system).

They seem antisocial unless they are with their own kind. If there are no others of like consciousness around them, they often turn inward, feeling like no other human understands them. School is often extremely difficult for them socially.

They will not respond to "guilt" discipline ("Wait till your father gets home and finds out what you did").

They are not shy in letting it be known what they need.

This list makes certain people feel special - just as the old Starseed Quiz created by Brad Steiger years ago when those who sought special purpose found themselves scoring high on the test.

How well do the Star Seeds and Indigo Children born years ago, function today?

This was just a title for those with emotional problems and learning challenges, parents rationalizing that their children were here with special purpose for the future of our changing reality. After years of anguish, most of these children have now been clinically diagnosed - endless ways to help them have emerged - so maybe that was their contribution to the human equation. Some have thrived in their own way, while others had negative destines - from crime to suicide. Most do not want to have children, their own lives a struggle they must handle each day.

The traits listed above are not unique. They are observable in most children. This supposed new type of child is believed by them to have come forward for a reason; most often suggested is that they will improve the world in some way. The changes generally discussed involve bringing peace, toppling corrupt institutions, and a shift from allopathic medicine to a greater understanding of more natural alternatives. According to many believers, indigo children are more in touch with a so-called "universal truth," and do not tolerate or understand behaviors or systems that are not in harmony with it. Indigo children are sometimes said to possess an extreme longevity, with a lifespan of several hundred years. There is no evidence to substantiate this claim.

It is possible to use the traits assigned to supposed indigo Children as a weakly scientific observation of social trends, rather than as a signifier of a new race or form of consciousness. Educators, generally, have not embraced the indigo child supposition for lack of evidence. Some alternative educators have accepted the indigo concept, and have related their mission to the needs of so-called indigo children. Philosophies that resonate with indigos' supposed style of learning may include experiential education, multiple intelligence strategies, project-based learning, home schooling, and student-centered learning.

Critics of the indigo children, which include most of established science, claim that it is not a legitimate scientific way of understanding social changes.

The Skeptic's Dictionary asserts: "the main thesis of The Indigo Children is that many children diagnosed as having Attention Deficit Hyperactivity Disorder are actually space aliens." Believers in this concept have proposed classifying it as protoscience rather than pseudoscience. Skeptics point out that no proponent of "indigo children" has ever provided a single piece of verifiable evidence to support their claims.

Alleged indigo children are often the offspring of "new age" parents. Exposed to new age thinking, it might be taken as unsurprising that the children possess a greater fluency of 'spiritual language' than earlier generations. Having been told that the vast majority of children are now "indigos", new age parents in fear of suppressing this 'special' generation may be encouraging behaviors that would otherwise have been thought antisocial. The traits listed by the authors could be interpreted as simple arrogance and selfish individualism if not backed up by evidence of above-average spiritual awareness (compassion, love, desire for harmony, etc.) by the child designated as "indigo".

Just as many people tend towards astrology because it presents believers with complimentary accounts of themselves, critics of the indigo children concept claim that parents relate to the hypothesis because it provides a more flattering conclusion about their children than that of conventional science.

The schema of a very gifted person being troubled during childhood is common in Western society, and parents may prefer to believe a child who has trouble fitting in is especially gifted rather than suffering from a condition like ADD. Some claim the labeling of a child as "indigo" is irresponsible as it may keep children shielded from scientific diagnosis, and for increasing the pressure on already struggling children by unrealistically raising parental expectation.

Supporters of the theory argue that there is little benefit in discussing this theory with skeptics. According to this argument, skeptics are already determined to disbelieve anything associated with the new-age movement, and thus exhibit systemic bias. Believers point to interviews done with the "indigo" children and their parents, and observations of the children, as proof of the validity of the idea of "indigo" children. They may also use the example of Kirlian photography (itself under debate) as evidence of "auras".

The most important part of parenting is early recognition of the issues faced by your child and early intervention. There are many venues out there from western to alternative medicine. This is not unlike the journey of the young adult seeking to find out their challenges and how to best cope with them - coping methods changing as one's consciousness changes. Most of all be honest with your situation so your child becomes informed of their needs - and yours as the parent.