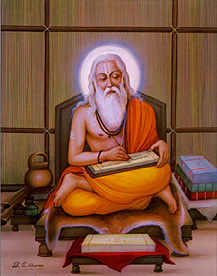 The assumption that the ancient Hindus could not read or write probably springs from the fact that no writing material was excavated on Indian soil. That pictographs await excavation in India does not undermine the importance of literary evidence to the existence of writing skills of the Vedic folks.

Also, it is suggested that no script was developed in Rig Vedic India since the verb "likha-to write" is not mentioned in the Vedas. Rig Veda is acclaimed as the oldest extant literature available to humans.

It is definitely older than the Ramayan (at least 5500 B.C) and some internal evidence takes it as far as 23,000 B.C. There are a number of references in the Rig Veda which allude to the art of writing. That the seers 'inscribed, engraved' words (on some material) itself points that they knew how to write.

There are a number of compositional chandas (metres), lines in a metre and specific number of words in a line available from the Rig Vedic text.

It will take a tremendous amount of mental effort to compose and to commit to memory the vast amount of lines with all the intricacies involved.

Unless these are reduced to writing and given a specific concrete shape, it would not facilitate oral transmission.

Yet another verse (RgV 10-62-7) mentions cows being "marked" by an "8-eight" which again shows that the ancients possessed the art of writing.

If there was no script, preferably the verb "to pronounce" rather than "to inscribe/write" would have been utilized.

However, such a distinction has been made obviously because a written form of language existed during that time.

Even during the Mahabharat era the art of writing was prevalent. The verb "lekhi (writing)" in all its forms (lekhako, lekhani, etc.) appears numerous times in the Mahabharat text (Aadi 1.77/78).

On the arrows were inscribed the names of specific persons to whom they belonged. Distinction has been made between "to write" and "to read" (Harivansha .50) indicating "what was written was being read".

How could a text with a monumental 100,000 verses could be composed, preserved and transmitted through memory alone?

This incredible feat may have been performed by a few, but that does not suggest that the art of writing was not developed. The Atharvasheersha (from the Upanishads) symbolizes Shree Ganesh as an "omkar", a combination of "g-aakar, m-aakar".

How can there be an "aakar - shape" to a syllable only transmitted orally?

The "omkar" is mentioned in the Mahabharat text as well indicating that the art of writing was prevalent during the Mahabharat times, that is around 3100 B.C., as a continuing tradition since remote antiquity.

The Mahabharat text (3100 B.C) contains quotes of Rishi Vasistha of the Ramayanic Era (alteast 5500 B.C) on the meaning of the "granth(a)" (manuscript), its value and other literary attributes. Discussions on skills required to writing and evaluating a "granth(a)" were already in vogue during the Ramayanic era.

How is this possible if "writing" was not known in that era? The Yujurvedic Taittiriya Samhita and also the Atharvaveda utilize the word "likha (to write)", although not as ancient as the RgVed, at least are of the Ramayanic era.

The art of writing was known by ancient Vedic peoples since remote times.

In spite of the evidence presented above, it has been continually stressed that the ancients passed on their knowledge through oral tradition alone and no art of writing was available - the earlier part of course is probably true.

On the deliberate stress given to oral transmission, R.N. Dandekar remarks, "There is, indeed, considerable circumstantial and inferential character which enables us to perceive the existence of writing even in the very early periods of Indian cultural history.

It is true that the Veda has been handed down from generation to generation through oral tradition. It must not, however, be supposed that on that account, as is often erroneously done, that the art of writing was unknown in the early Vedic age.

The practice of oral transmission of Veda was adopted, not because written copies of these texts were not available, but presumably because it was believed that oral transmission alone was more conducive to the preservation of the magic-religious potency and the formal protection of those arts.