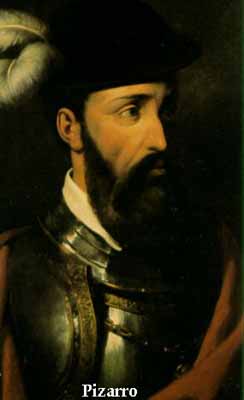 With the arrival from Spain in 1532 of Francisco Pizarro and his entourage of mercenaries or conquistadors, the Inca empire was seriously threatened for the first time. Duped into meeting with the conquistadors in a peaceful gathering, an Inca emperor, Atahualpa, was kidnapped and held for ransom. After paying over $50 million in gold by today's standards, Atahualpa, who was promised to be set free, was strangled to death by the Spaniards who then marched straight for Cuzco and its riches.

Ciezo de Leon, a conquistador himself, wrote of the astonishing surprise the Spaniards experienced upon reaching Cuzco. As eyewitnesses to the extravagant and meticulously constructed city of Cuzco, the conquistadors were dumbfounded to find such a testimony of superior metallurgy and finely tuned architecture. Temples, edifices, paved roads, and elaborate gardens all shimmered with gold.

By Ciezo de Leon's own observation the extreme riches and expert stone work of the Inca were beyond belief: "In one of (the) houses, which was the richest, there was the figure of the sun, very large and made of gold, very ingeniously worked, and enriched with many precious stones. They had also a garden, the clods of which were made of pieces of fine gold; and it was artificially sown with golden maize, the stalks, as well as the leaves and cobs, being of that metal.

Besides all this, they had more than twenty golden (llamas) with their lambs, and the shepherds with their slings and crooks to watch them, all made of the same metal. There was a great quantity of jars of gold and silver, set with emeralds; vases, pots, and all sorts of utensils, all of fine gold - it seems to me that I have said enough to show what a grand place it was; so I shall not treat further of the silver work of the chaquira (beads), of the plumes of gold and other things, which, if I wrote down, I should not be believed."

Much of the conquest was accomplished without battles or warfare as the initial contact Europeans made in the New World resulted in rampant disease. Old World infectious disease left its devastating mark on New World Indian cultures. In particular, smallpox spread quickly through Panama, eradicating entire populations. Once the disease crossed into the Andes its southward spread caused the single most devastating loss of life in the Americas. Lacking immunity, the New World peoples, including the Inca, were reduced by two-thirds.

In the years following the conquest, the only chroniclers of the Incan culture lacked the objectivity and scientific interests needed for accurate accounts. In addition, they all held to a rigid belief in the literal truth of Biblical records. Thus, much of the myths and legends were held in revulsion, as either trivial or immoral, and failed to reach the annals of Incan civilization.

Those myths that did survive may have been distorted or diluted by those Incans who chose to adapt their stories for the Spanish Christian ears. No conclusion can be made about this mysterious myth other than that is an intriguing and complicated culture, whose form of communication, albeit surreptitious, is innately beautiful.

With the aid of disease and the success of his initial deceit of Atahualpa, Pizarro acquired vast amounts of Inca gold which brought him great fortune in Spain. Reinforcements for his troops came quickly and his conquest of a people soon moved into consolidation of an empire and its wealth. Spanish culture, religion, and language rapidly replaced Inca life and only a few traces of Inca ways remain in the native culture as it exists today.

What remains of the Inca legacy is limited, as the conquistadors plundered what they could of Inca treasures and in so doing, dismantled the many structures painstakingly built by Inca craftsmen to house the precious metals. Remarkably, a last bastion of the Inca empire remained unknown to the Spanish conquerors and was not found until explorer Hiram Bingham discovered it in 1911.

He had found Machu Picchu a citadel atop a mountainous jungle along the Urubamba River in Peru. Grand steps and terraces with fountains, lodgings, and shrines flank the jungle-clad pinnacle peaks surrounding the site. It was a place of worship to the sun god, the greatest deity in the Inca pantheon. 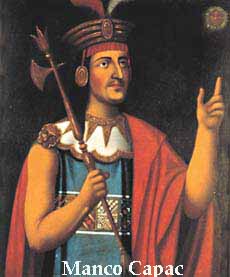 Manco Capac, was the name of the last of the Inca rulers, and the son of Huayna Capac. Manco Capac was supposedly crowned (1534) emperor by the Spanish conquistador Francisco Pizarro but was tolerated only as a puppet. He escaped, levieda huge army, and in 1536 laid siege to Cuzco, the Inca capital. The defense was commanded by Hernando Pizarro. Although the Incans had by now learned some European tactics of war they were outclassed by technical advantages. Manco Capac could not prevent dismemberment of his army at harvest time. The heroic siege, which virtually destroyed the city, was abandoned after ten months, but during the ensuing eight years the Inca's name became a terror throughout Peru. Manco Capac fought a bloody guerrilla war against soldiers and settlers. He was treacherously murdered in 1544, after giving refuge to the defeated supporters of Diego de Almagro, who had rebelled against Pizarro.

In 1541 the Wheel of Fortune turned against Francisco Pizarro, and the conquistador reaped a bit of what he had sown. After the fall of Cuzco in 1533, Pizarro and his brother cut their rival, Diego de Almagro, out of much of the booty. By way of compensation, Francisco offered him Chile, and the Spaniard marched off in hopes of conquest and gold. He returned two years later, having found no fortune, and helped suppress Manco. His quarrel with the Pizarros led to a battle between their factions at Las Salinas on April 26, 1538. Captured, the defeated Almagro was garroted on Hernando's order. Francisco, now governor, later stripped Almagro's son, also named Diego, of lands leaving him bankrupt.

The embittered young Almagro and his associates plotted to assassinate Francisco after mass on June 16, 1541, but Pizarro got wind of their plan and stayed in the governor's palace. While Pizarro, his half-brother Francisco Martín de Alcántara, and about 20 others were having dinner, the conspirators invaded the palace. Most of Pizarro's guests fled, but a few fought the intruders, numbered variously between seven and 25. While Pizarro struggled to buckle on his breastplate, his defenders, including Alcántara, were killed. For his part Pizarro killed two attackers and ran through a third. While trying to pull out his sword, he was stabbed in the throat, then fell to the floor where he was stabbed many times.

Alcántara's wife buried Pizarro and Alcántara behind the cathedral. He was reburied under main altar in 1545, then moved into a special chapel in the cathedral on July 4, 1606. Church documents from the verification process for remains of St. Toribio in 1661, however, note a wooden box inside of which was a lead box inscribed in Spanish: Here is the skull of the Marquis Don Francisco Pizarro who discovered and won Peru and placed it under the crown of Castile.

In 1891, on the 350th anniversary of Pizarro's death, a scientific committee examined the desiccated remains that church officials had identified as Pizarro. In their account in American Anthropologist 7:1 (January 1894), they concluded that the skull conformed to cranial morphology then thought to be typical of criminals, a result seen as confirming identification. A glass, marble, and bronze sarcophagus was built to hold the mummy, which was venerated by history buffs and churchgoers.

But in 1977, workers cleaning a crypt beneath the altar found two wooden boxes with human bones. One box held the remains of two children; an elderly female; an elderly male, complete; and an elderly male, headless; and some fragments of a sword. The other contained the lead box--inscribed as had been recorded in 1661--in which was a skull that matched postcranial bones of the headless man in the first box. A Peruvian historian, anthropologist, two radiologists, and two American anthropologists studied the remains. The man was a white male at least 60 years old (Pizarro's exact age was unknown; he was said to be 63 or 65 by contemporary historians) and 5'5" to 5'9" in height. He had lost most of his upper molars and many lower incisors and molars, had arthritic lipping on his vertebrae, had fracture his right ulna while a child, and had suffered a broken nose.

Examination of the remains indicated that the assassins did a thorough job. There were four sword thrusts to neck, the sixth and twelfth thoracic vertebrae were nicked by sword thrusts, the arms and hands were wounded from warding off sword cuts (a cut on the right humerus and two on the left first metacarpal; the right fifth metacarpal was missing altogether), a sword blade had cut through the right zygomatic arch, a thrust penetrated the left eye socket, a rapier or dagger went through the neck into the base of skull, and a pair of thrusts had damage the left sphenoid. The savage overkill suggests revenge as a motive rather than simple murder or death in battle.

The scholars concluded that these were indeed the remains of Francisco Pizarro. The two children might be Pizarro's sons who died young, the elderly female is possibly the wife of Alcantara, and the other elderly male Alcántara. The dried out body long thought to be Pizarro exhibited no sign of trauma as would be expected if it was indeed the corpse of the conquistador. They decided that the interloper was possibly a church official, and replaced the body with the conquistador's bones in the glass sarcophagus.