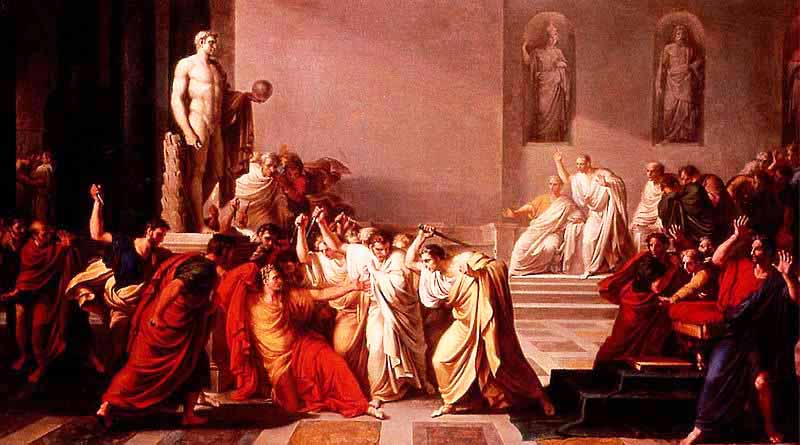 The Ides of March is a day on the Roman calendar that corresponds to March 15. It was marked by several religious observances, and became notorious as the date of the assassination of Julius Caesar March 15, 44 BCE.

The Romans did not number days of a month sequentially from the first through the last day. Instead, they counted back from three fixed points of the month: the Nones (5th or 7th, depending on the length of the month), the Ides (13th or 15th), and the Kalends (1st) of the following month. The Ides occurred near the midpoint, on the 13th for most months, but on the 15th for March, May, July, and October. The Ides were supposed to be determined by the full moon, reflecting the lunar origin of the Roman calendar.

In modern times, the Ides of March is best known as the date on which Julius Caesar was assassinated in 44 BCE. Caesar was stabbed to death at a meeting of the senate. As many as 60 conspirators, led by Brutus and Cassius, were involved. According to Plutarch, a seer had warned that harm would come to Caesar no later than the Ides of March.

On his way to the Theatre of Pompey, where he would be assassinated, Caesar passed the seer and joked, "The ides of March have come," meaning to say that the prophecy had not been fulfilled, to which the seer replied "Aye, Caesar; but not gone." This meeting is famously dramatized in William Shakespeare's play Julius Caesar, when Caesar is warned by the soothsayer to "beware the Ides of March." The Roman biographer Suetonius identifies the "seer" as a haruspex named Spurinna. Caesar replies, "He is a dreamer, let us leave him. Pass."

According to Plutarch's account, Caesar had previously made the wise decision to stay within the safety of his bedroom chambers on the 15th of March. However, Caesar's "friend" Decimus (Albinus) Brutus (not Marcus Brutus) managed to convince him that the astrologer's warnings were nothing more than superstitious foolishness. So Julius Caesar decided to attend the Senate on the 15th of March. On his way to the Senate, Caesar "accidentally" met up with the astrologer.

Upon seeing the astrologer, Caesar confidently informed Spurinna: "The Ides of March are come." Spurinna answered, "Yes, they are come, but they are not past." Later that day - on March 15, 44 B.C.E - Caesar's enemies assassinated him in the Pompey theater, at the foot of Pompey's statue, where the Roman Senate was meeting that day in the temple of Venus.

Another theory, as to why Caesar might have seemingly been ignoring the ominous warning of Spurinna, is that perhaps Julius Caesar got the dates of the warning mixed up. He may have been thinking that the Ides of March fell on the 13th. In the ancient Roman calendar, each of the 12 months had an "ides." In March, May, July and October, the ides fell on the 15th day. In every other month, the ides fell on the 13th. The word "ides" was derived from the Latin "to divide." The ides were originally meant to mark the full moon - but since the solar calendar months and lunar months were of different lengths, the ides quickly lost their original intent and purpose. Using this theory, forgetful Caesar would have been very careful and stayed home on the 13th of March, but on the 15th of March his guard was down.