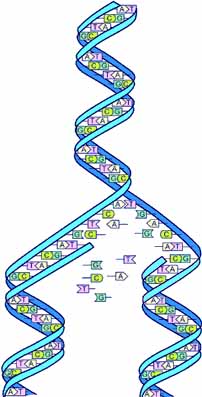 From science to pseudoscience - exploring the human genome and humanity's journey in physical reality ....


The human genome is the complete set of nucleic acid sequences for humans, encoded as DNA within the 23 chromosome pairs in cell nuclei and in a small DNA molecule found within individual mitochondria. Human genomes include both protein-coding DNA genes and noncoding DNA. Haploid human genomes, which are contained in germ cells (the egg and sperm gamete cells created in the meiosis phase of sexual reproduction before fertilization creates a zygote) consist of three billion DNA base pairs, while diploid genomes (found in somatic cells) have twice the DNA content. While there are significant differences among the genomes of human individuals (on the order of 0.1%), these are considerably smaller than the differences between humans and their closest living relatives, the chimpanzees (approximately 4%) and bonobos.

The Human Genome Project produced the first complete sequences of individual human genomes, with the first draft sequence and initial analysis being published on February 12, 2001. The human genome was the first of all vertebrates to be completely sequenced. As of 2012, thousands of human genomes have been completely sequenced, and many more have been mapped at lower levels of resolution. The resulting data are used worldwide in biomedical science, anthropology, forensics and other branches of science. There is a widely held expectation that genomic studies will lead to advances in the diagnosis and treatment of diseases, and to new insights in many fields of biology, including human evolution.

Although the sequence of the human genome has been (almost) completely determined by DNA sequencing, it is not yet fully understood. Most (though probably not all) genes have been identified by a combination of high throughput experimental and bioinformatics approaches, yet much work still needs to be done to further elucidate the biological functions of their protein and RNA products. Recent results suggest that most of the vast quantities of noncoding DNA within the genome have associated biochemical activities, including regulation of gene expression, organization of chromosome architecture, and signals controlling epigenetic inheritance.

There are an estimated 19,000-20,000 human protein-coding genes. The estimate of the number of human genes has been repeatedly revised down from initial predictions of 100,000 or more as genome sequence quality and gene finding methods have improved, and could continue to drop further. Protein-coding sequences account for only a very small fraction of the genome (approximately 1.5%), and the rest is associated with non-coding RNA molecules, regulatory DNA sequences, LINEs, SINEs, introns, and sequences for which as yet no function has been determined.

In June 2016, scientists formally announced HGP-Write, a plan to synthesize the human genome.


Research signals arrival of a complete human genome   PhysOrg - March 19, 2018
It's been nearly two decades since a UC Santa Cruz research team announced that they had assembled and posted the first human genome sequence on the internet. Despite the passage of time, enormous gaps remain in our genomic reference map. These gaps span each human centromere. New research from a UC Santa Cruz Genomics Institute is attempting to close these gaps. The research uses nanopore long-read sequencing to generate the first complete and accurate linear map of a human Y chromosome centromere. This milestone in human genetics and genomics signals that scientists are finally entering a technological phase when completing the human genome will be a reality.

In a milestone for the understanding of human genetics, scientists just announced the results of five years of work in unraveling the secrets of how the genome operates. The ENCODE project, as it is known, dispensed with the idea that our DNA is largely "junk," repeating sequences with no function, finding instead that at least 80 percent of the genome is important. The new findings are the latest in a series of increasingly deep looks at the human genome. Here are some of the major milestones scientists have passed along the way.

The realization that traits and certain diseases can be passed from parent to offspring stretches back at least to the ancient Greeks, well before any genome was actually decoded. The Greek physician Hippocrates theorized that "seeds" from different parts of the body were transmitted to newly conceived embryos, a theory known as pangenesis. Charles Darwin would later espouse similar ideas.

What exactly these "seeds" might be was destined to remain a mystery for centuries. But the first person to put heredity to the test was Gregor Mendel, who systematically tracked dominant and recessive traits in his famous pea plants. Mendel published his work on the statistics of genetic dominance in 1866 to little notice.

But the painstaking work of cross-breeding pea plants wouldn't languish for long. In 1869, Swiss physician Johannes Friedrich Miescher became the first scientist to isolate nucleic acids, the active ingredient of DNA. Over the next several decades, scientists peering deeper into the cell discovered mitosis and meiosis, the two types of cell division, and chromosomes, the long strands of DNA and protein in cell nuclei.

In 1903, early geneticist Walter Sutton put two and two together, discovering through his work on grasshopper chromosomes that these mysterious filaments occur in pairs and separate during meiosis, providing a vehicle for mom and dad to pass on their genetic material. "I may finally call attention to the probability that the associations of paternal and maternal chromosomes in pairs and their subsequent separation É may constitute the physical basis of the Mendelian law of heredity," Sutton wrote in the journal The Biological Bulletin in 1902. He followed up with a more comprehensive paper, "The Chromosomes in Heredity" in 1903. (German biologist Theodor Boveri came to similar conclusions about chromosomes at the same time Sutton was working on his chromosome discovery.)

With the link between chromosomes and heredity confirmed, geneticists delved deeper into the mysteries of the genome. In 1941, geneticists Edward Tatum and George Beadle published their work revealing that genes code for proteins, explaining for the first time how genes direct metabolism in cells. Tatum and Beadle would share half of the 1958 Nobel Prize in Physiology or Medicine for their discovery, which they made by mutating bread mold with X-rays.

Now scientists knew that DNA was the molecule responsible for carrying genetic information. But how? And what did this molecule look like?

The pieces of the puzzle were beginning to come together throughout the 1940s. In 1950, biochemist Erwin Chargaff figured out that the nucleotides, or building blocks, of DNA occur in specific patterns. These nucleotides are represented by four letters (A, T, G and C), and Chargaff was the first to discover that no matter the species, A and T always appeared in equal measures, as did G and C.

This discovery would be crucial to James Watson and Francis Crick, the scientists who would describe the structure of DNA for the first time in 1953. Combining Chargaff's work with studies by Maurice Wilkins and Rosalind Franklin and other scientists, the pair worked out the iconic double helix shape of DNA, a discovery Crick reportedly called "the secret of life."

With DNA becoming an increasingly open book, scientists began to tackle genomics, the study of the complete genetic library of organisms. In 1977, researchers sequenced a complete genome for the first time, starting with a rotund little bacteriophage known as Phi X 174. By 1990, science was ready to start something much bigger: a complete cataloguing of the human genome.

The result was the Human Genome Project, a 13-year international effort that resulted in the complete sequencing of the human genome in 2001. (More detailed analyses of the initial sequence continued after the release of this first draft.) The project revealed that humans have about 23,000 protein-coding genes, a mere 1.5 percent of the genome. The rest is made up of what has been called "junk DNA," including fragments of DNA that don't code for any proteins and chunks of genes that regulate other portions of the genome.

Now, the ENCODE project has looked deeper into this "junk DNA" than ever before. And junk it is not: According to more than 30 research papers published today (Sept. 5) in a number of journals including Science and Nature, at least 80 percent of the genome is biologically active, with much non-protein-coding DNA regulating nearby genes in a complex dance of influence.

The findings reveal that the genetic basis of many diseases may not be in protein-coding genes at all, but in their regulatory neighbors. For example, genetic variants related to metabolic diseases pop up in genetic regions that activated only in liver cells. Likewise, regions activated in immune cells hold variants that have been associated with autoimmune disorders such as lupus.

"These breakthrough studies provide the first extensive maps of the DNA switches that control human genes," study researcher John Stamatoyannopoulos, associate professor of genome sciences and medicine at the University of Washington, said in a statement. "This information is vital to understanding how the body makes different kinds of cells, and how normal gene circuitry gets rewired in disease. We are now able to read the living human genome at an unprecedented level of detail, and to begin to make sense of the complex instruction set that ultimately influences a wide range of human biology."


The Junk in Your Genes 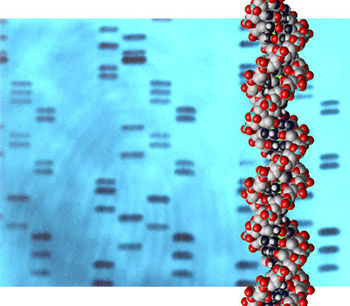 DNA ... beads of encoded information that are the soul
journey and switch on at a given time as if time capsules.