In Greek mythology, virginal Hestia is the goddess of the hearth, of the right ordering of domesticity and the family, who received the first offering at every sacrifice in the household, but had no public cult.

In Roman mythology her more civic approximate equivalent was Vesta, who personified the public hearth, and whose cult round the ever-burning hearth bound Romans together in the form of an extended family.

The similarity of names, apparently, is misleading: "The relationship hestia-histie - Vesta cannot be explained in terms of Indo-European linguistics; borrowings from a third language must also be involved," Walter Burkert has written (1985, III.3.1 note 2).

At a very deep level her name means "home and hearth": the household and its inhabitants. "An early form of the temple is the hearth house; the early temples at Dreros and Prinias on Crete are of this type as indeed is the temple of Apollo at Delphi which always had its inner hestia".

It will be recalled that among classical Greeks the altar was always in the open air with no roof but the sky, and that the oracle at Delphi was the fane of the Goddess before it was assumed by Apollo. The Mycenaean great hall, such as the hall of Odysseus at Ithaca was a megaron, with a central hearthfire.

The hearth fire of a Greek or a Roman household was not allowed to go out, unless it was ritually extinguished and ritually renewed, accompanied by impressive rituals of completion, purification and renewal. Compare the rituals and connotations of an eternal flame and of sanctuary lamps.

At the more developed level of the poleis Hestia symbolizes the alliance between the colonies and their mother-cities.

Hestia is one of the three Great Goddesses of the first Olympian generation: Hestia, Demeter and Hera. She is the oldest of the three daughters of Rhea and Cronus, the sisters to three brothers Zeus, Poseidon, and Hades. Originally listed as one of the Twelve Olympians, Hestia gave up her seat in favour of new-comer Dionysus to tend to the sacred fire on Mt. Olympus.

Her altars included every family hearth.

Immediately after their birth, Cronus swallowed Hestia and her siblings except for the last and youngest, Zeus, who later rescued them and led them in a war against Cronus and the other Titans. Hestia, the eldest daughter "became their youngest child, since she was the first to be devoured by their father and the last to be yielded up again" - the clearest possible example of mythic inversion, a paradox that is noted in the Homeric hymn to Aphrodite (ca 700 BCE):

"She was the first-born child of wily Cronos - and youngest too." 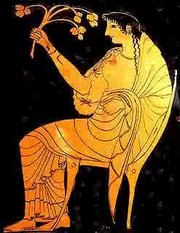 It is also recalled in the hymn that Poseidon, and Apollo of the younger generation, each aspired to Hestia, but the goddess was unmoved by Aphrodite's works and swore to retain her virginity. The Homeric hymns, like all early Greek literature, are concerned to reinforce the supremacy of Zeus, and Hestia's oath is taken upon the head of Zeus, as surety.

A measure of the goddess's ancient primacy - "queenly maid...among all mortal men she is chief of the goddesses", in the words of the Homeric hymn - is that she was owed the first as well as the last sacrifice at every ceremonial assembly of Hellenes, a pious duty related by the mythographers as the gift of Zeus, as if it had been his to bestow: another mythic inversion if, as is likely, the ritual was too deep-seated and essential for the Olympian reordering to overturn.

The "great hall" of Minoan-Mycenaean culture as well as the type of earliest enclosed site built for worship on the Greek mainland is the megaron: the name of the Goddess who was venerated in the Helladic megara is not recorded, but at the center of each holy site laid bare by archaeologists was normally a hearth.

Hestia does not figure in any mythic narrative: she did not roam; she had no adventures; she simply was. The Homeric hymn To Hestia is consequently brief, simply an invocation of five lines, a prelude:

Hestia, you who tend the holy house of the lord Apollo, the Far-shooter at goodly Pytho, with soft oil dripping ever from your locks, come now into this house, come, having one mind with Zeus the all-wise: draw near, and withal bestow grace upon my song.

In the hymn, Hestia is located, not at Mount Olympus, but in ancient Delphi, which was considered the central hearth of all the Hellenes.

That the mere concept of the violation of Hestia is grotesquely improper is the subtext to the anecdote recounted or invented by Ovid (Fasti, vi.319ff), in which Vesta, attending a banquet offered by Cybele on Mount Ida and overcome with sleep afterwards was once almost raped by Priapus, a lesser fertility god, but was saved by the braying of a donkey.