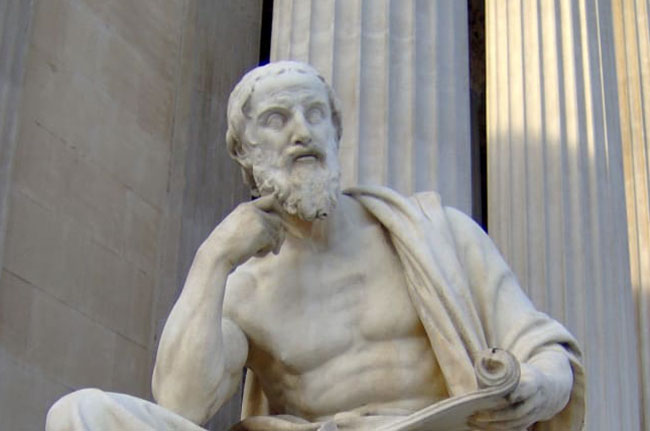 Herodotus of Halicarnassus was a historian who lived in the 5th century BC (484 BC-ca. 425 BC). He is famous for his writings on the conflict between Greece and Persia, as well as the descriptions he wrote of different places and people he met on his travels. Herodotus wrote A History of the Persian Wars.

Herodotus' invention earned him the title "The Father of History" and the word he used for his achievement, historie, which previously had meant simply "inquiry", passed into Latin and took on its modern connotation of "history" or "story". His nickname was given to him by Cicero.

Conversely, however, many historians and philosophers who take a more sceptical view of Herodotus' accounts and narratives have a different name for him, dubbing him "The Father of Lies" or "the deceiver." In many cases, Herodotus, unsure of the exact history, would give the most prominent competing historical accounts of a particular event or region, and then express his opinion as to which he believed was accurate, with an explanation of why.

The Histories were often attacked in the ancient world for bias, inaccuracy, and plagiarism. Similar attacks have been made by several modern scholars, who argue that Herodotus exaggerated the extent of his travels and fabricated sources. Respect for his accuracy has increased in the last half century, however, and he is now recognized not only as a pioneer in history but in ethnography and anthropology as well.Herodotus has passed to us information current in his own day: he reports that the annual flooding of the Nile was said to be the result of melting snows far to the south, and comments that he cannot understand how there can be snow in the hottest part of the world.

He also passes on reports from Phoenician sailors from Egypt that while circumnavigating Africa they saw the sun on their right while sailing westwards. Thanks to this passing on of information which he himself did not believe, he has shown us something of the extent of contemporary geographical information.

Published between 430 BC and 424 BC, The Histories were divided by later editors into nine books, named after the Muses. The first six books deal with the growth of the Persian Empire. They begin with an account of the first Asian monarch to conquer Greek city-states and exact tribute, Croesus of Lydia. Croesus lost his kingdom to Cyrus, the founder of the Persian Empire.

The first six books end with the defeat of the Persians in 490 BC at the Battle of Marathon, which was the first setback to their imperial progress.

The last three books of The Histories describe the attempt of the Persian king Xerxes ten years later to avenge the Persian defeat at Marathon and absorb Greece into the Persian Empire.

The Histories end with the year 479 BC, when the Persian invaders were wiped out at the Battle of Plataea and the frontier of the Persian Empire receded to the Aegean coastline of Asia Minor.

As to Herodotus's life, we know that he was exiled from Halicarnassus after his involvement in an unsuccessful putsch against the ruling dynasty, and he withdrew to the island of Samos. He seems never to have returned to Halicarnassus, though in his Histories he appears to be proud of his native city and its queen, Artemisia. It must have been during his exile that he undertook the journeys that he describes in The Histories.

These journeys took him to Egypt, as far south as the first cataract of the Nile, to Babylon, to Ukraine, and to Italy and Sicily. Herodotus mentions an interview with an informant in Sparta, and almost certainly he lived for a period in Athens. In Athens, he tapped the oral traditions of the prominent families, in particular the Alkmaeonidai, to which Pericles belonged on his maternal side.

But the Athenians did not accept foreigners as citizens, and when Athens sponsored the colony of Thurii in the instep of Italy in 444 BC, Herodotus became a colonist. Whether he died there or not is uncertain.

At some point he became a logios Đ that is, a reciter of prose logoi or stories - and his subject matter was tales of battles, other historical incidents, and the marvels of foreign lands. He made tours of the Greek cities and the major religious and athletic festivals, where he offered performances for which he expected payment.

In 431 BC, the Peloponnesian War broke out between Athens and Sparta. It may have been that conflict, which divided the Greek world, that inspired him to collect his stories into a continuous narrative - The Histories - centered on the theme of Persia's imperial progress, which Athens and Sparta as allies had brought to a halt. Herodotus