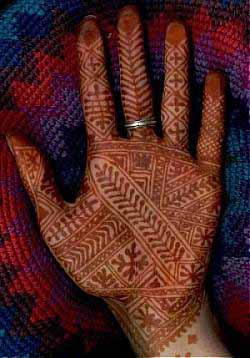 The history and origin of Henna is hard to trace with centuries of migration and cultural interaction it is difficult to determine where particular traditions began. There is very persuasive evidence that the Neolithic people in Catal Huyuk, in the 7th millennium BC, used henna to ornament their hands in connection with their fertility goddess.

The use of Henna in the 4th-5th centuries in the Deccan of western India is clearly illustrated on Bodhisattvas and deities of cave wall murals at Ajanta, and in similar cave paintings in Sri Lanka. The evidence proves henna usage in India seven centuries before the Moghul invasion, and hundreds of years before the inception of the Islamic religion, which began in the mid-7th century AD.

The word Henna has its origin in the Arabic word Al-Hinna. In botanical terms it is Lawsonia Enermis, a plant which grows to be 4 to 8 feet high in hot climates and can be found in Iran, Pakistan, Syria, Persia, Morocco, Palestine, Yemen, Egypt, Uganda, Tanzania, Afghanistan, Senegal, Kenya, Ethiopia, Eritrea, and India. The leaves, flowers and the twigs of the plant are ground into fine powder containing natural dying properties called tannins; the powder is then mixed with hot water.

Various shades are procured by mixing henna with the leaves and fruit of other plants, such as indigo, tea, coffee, cloves and lemon. The resulting paste is often used as a hair dye. During hot weather, henna acts as a cooling agent when applied to the palms of the hands and the bottoms of the feet. When used in decorative body art, sugar and oil are also added to the mixture to strengthen the color and longevity of design.

While henna is known by many names including Henne, Al-Khanna, Jamaica Mignonette, Egyptian Privet and Smooth Lawsonia, the art of its application is referred to as Henna (Arabic) or Medhi (Hindu).

Centuries of migration and cultural interaction make the task of determining henna's exact origin a complex one. However, historians argue that henna has been used for at least 5,000 years in both cosmetic and healing capacities.

Some researches argue henna originated in ancient India while others claim it was brought to India by Egyptian moghuls in the 12th century C.E. Still others will contend that the tradition of applying henna to the body began in the Middle East and North Africa in ancient times.

Archaeological research indicates henna was used in ancient Egypt to stain the fingers and toes of Pharaohs prior to mummification. But research also argues the Pharaohs were not the only Egyptians to use henna. Ancient Egyptians and many indigenous and aboriginal people around the world believed that the naturally derived red substances of ochre, blood and henna had qualities that improved human awareness of the earth's energies. It was therefore applied to help people keep in touch with their spirituality.

Ani, a mummified scribe (1400BC), had fingernails stained with henna. There are also several medieval paintings depicting The Queen of Sheba decorated with henna on her journey to meet Solomon. 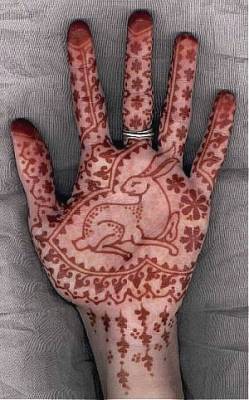 The art of henna decorating has been practiced in Northern Africa, the Middle East, Southern Asia, and Europe and has been used by Hindus, Sikhs, Jews, Moslems, Christians, Pagans, and others. 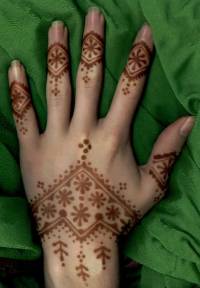 Henna has been used for centuries for body decoration. Ancient Egyptians used henna prior to mummification. People all over the world continue to use henna, primarily for cosmetic purposes. However, in countries where henna is rooted in historical tradition, members of the working class more commonly apply henna for medicinal and healing purposes, as well as connection to Spirit.

In Cairo, Egypt, for example, many working class citizens had their hands and feet dipped in henna to produce a solid covering, which differs from the common decorative design that is usually applied for weddings and other celebrations.

As a healing plant, henna conditions, cleanses, colors and cools the skin. When applied to hair, it has the same effect. Millions of Asian and African people regularly apply henna to their hair. In these regions, henna is inexpensive, readily available, and helps the cool the scalp in the hot summer months.

The art form of henna (Arabic) or mehndi (Hindi) varies from region to region. Varying designs have a different meaning for members of each culture, such as good health, fertility, wisdom, protection and spiritual enlightenment. While Arabic henna designs are usually large, floral patterns on the hands and feet, Indian mehndi involves fine, thin lines for lacy, floral and paisley patterns covering entire hands, forearms, feet and shins. 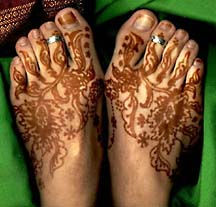 Throughout time henna has been associated with special celebrations. Betrothals, weddings, the eighth month of pregnancy, the birth, the 40th day after a woman gives birth, naming ceremonies, circumcisions, etc, are all events celebrated with henna. Eids, and other religious holidays are also occasions to be hennaed. There are also some healing ceremonies, like the Zar in North Africa, which include its use. A common practice seen in India and in the Islamic world is the pre-wedding tradition of 'Night of Henna' parties, like the Sudanese one described earlier. 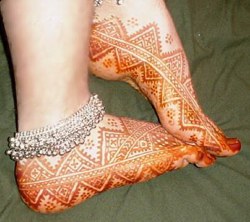 Medhi is an ancient Indian art form which has been performed for generations in the Middle East, India, Pakistan etc, but has recently been popularized by United States celebrities (e.g. American pop music icon Madonna's "Ray of Light" music video).

Women in India are traditionally painted henna on their hands and feet, insides of their arms and up their shins most often for a wedding, or other special occasion. Sometimes the chest, neck and throat will be tattooed. The subject matter is rather abstract, and often incorporates religious and auspicious symbols.

Used to pay homage to the body, cosmetics and perfumes were also essential to the Indian woman, whose duty it was to appear alluring to her lover. Staining the nails, skin and hair with henna is the favorite way of enhancing beauty amongst women in the Middle East also. In the famous Indian treatise on love, the Kama Sutra (compiled between 100 and 600 C.E.) women are advised to learn the arts of tattooing and of "coloring the teeth, garments, hair, nails, and bodies." Cosmetics also served as an emblem of class rank or caste; the placement of facial adornments separated the upper castes from the lower. Many Indian women still use cosmetics in the ancient way; eyelids are tinted with an antimony-based dye, the face and arms are stained yellow with saffron powder, and the soles of the feet are reddened with henna.

Hennaed skin is not tattooed as the practice does not require any piercing. Henna paste is a dye that leaves a more or less durable stain on the outer layer of the skin alone. Henna contains hennotannic acid that binds with cells, so the henna paste must stay moist and in contact with the skin for a while. When applied, the henna paste is always black, but the resulting pattern with natural henna varies from light orange to dark brown.

Heat makes the dye darker. Black stains are the result of additional dyes and compounds added to the paste. The henna stain will last until the top layer of the skin exfoliates. All skin on the body gradually exfoliates and is replaced by new skin in 1-12 weeks, depending on individual factors. The henna, then, will last as long as 8 weeks on the thick soles of your feet, or go away as quickly as 3-4 days on very thin parts of your skin.

There are three principal design styles in henna painting: firstly, the Arabic designs feature large patterns on the hands and feet; secondly, the Indian designs are more fine-lined and paisley patterned; and thirdly, the Sudanese designs are large and bold with geometric angles.

It is very unusual for anyone to have an adverse reaction to natural henna as it is one of the safest cosmetics ever used, but if one is concerned then a patch test could be the answer.

The application of henna to the body is neither painful nor poisonous. When used in body decoration, henna can be thought of as an organically-derived temporary tattooing. Henna simply a method of drawing various designs on the skin without the use of needles. As the skin absorbs and reacts with the henna powder, the skin is actually stained for a period of up to four weeks. Because henna is a natural stain, it can't be rubbed off or removed with soap and water.

The dye, which is permanent on fabric or wood, lingers anywhere from 2-12 weeks on skin, depending upon the quality of the henna, its reaction with an individual's skin and the care taken to preserve the design.

Henna's traditional decorating purposes vary from culture to culture. The most popular traditional use is tied closely with weddings and bridal preparation; these designs tend to be the most ornate, covering the most area. Other uses include the celebration of circumcision, pregnancy, birth, el Eid (the end of Ramadan), for good luck and protection from the evil eye and djinn (malignant desert spirits, or "genies"), female camaraderie and beauty. Depending on the culture, men may use it as well as women, usually for more symbolic purposes; masculine designs are generally very basic, simple and small in design.

In the 12th century, henna painting spread to India. It is on this continent that the art really blossomed.

Traditional Indian and Pakistani designs tend to be very intricate, with dense design and detail. These designs are most often abstract, involving paisley shapes, lines, dots, etc. The non-Moslem wedding designs, pictures of fish, peacocks, and people can be found.

People here normally adorned themselves during auspicious celebrations, particularly marriage ceremonies. Traditionally, friends would apply the intricate designs on the hands and feet of the bride-to-be and her cortage. Hidden among the tangled, intertwining patterns would be the initials of the bride and groom.

Non-traditional design tends to be a mix of all of the above and is more personalized per individual. One might like a particular portion of an Indian design and want infused a symbol meaningful to him or her. There are also picture symbols (as in astrological & mythical & Native American, etc.), religious or spiritual symbols (pentagrams, crosses, ankhs, Om's, etc.), or script/writing from other cultures (runes, Chinese characters, Arabic, Tibetan or Sanskrit, etc.). Others choose designs purely for aesthetic purposes, like trailing vines or filigree patterns. The potential variety in design is practically limitless.

Henna decorating will survive in traditional uses within specific ethnic cultures and within various communities in the United States. The richly beautiful art of henna knows no boundaries in culture, ethnicity, gender, religious or spiritual beliefs. In its many forms, henna decorating is truly a gift of beauty, touch and trust.