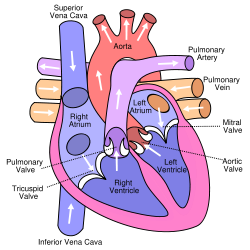 Cardiovascular disease or heart disease is a class of diseases that involve the heart or blood vessels (arteries and veins). While the term technically refers to any disease that affects the cardiovascular system (as used in MeSH C14 or International Statistical Classification of Diseases and Related Health Problems 10th Revision (ICD10), ICD-10 Chapter IX: Diseases of the circulatory system), it is often used to refer to those related to atherosclerosis and/or hypertension. The causes, mechanisms, and treatments of these conditions often overlap.

Age is an important risk factor in developing cardiovascular diseases. It is estimated that 87 percent of people who die of coronary heart disease are 60 and older. At the same time, the risk of stroke doubles every decade after age 55. Multiple explanations have been proposed to explain why age increases the risk of cardiovascular diseases. One of them is related to serum cholesterol level.

In most populations, the serum total cholesterol level increases as age increases. In men, this increase levels off around age 45 to 50 years. In women, the increase continues sharply until age 60 to 65 years. Aging is also associated with changes in the mechanical and structural properties of the vascular wall, which leads to the loss of arterial elasticity and reduced arterial compliance and may subsequently lead to coronary artery disease.

Men are at greater risk of heart disease than pre-menopausal women. However, once past menopause, a womanšs risk is similar to a manšs.

Another study reports similar results that gender difference explains nearly half of the risk associated with cardiovascular diseases One of the proposed explanations for the gender difference in cardiovascular disease is hormonal difference. Among women, estrogen is the predominant sex hormone. Estrogen may have protective effects through glucose metabolism and hemostatic system, and it may have a direct effect on improving endothelial cell function. The production of estrogen decreases after menopause, and may change the female lipid metabolism toward a more atherogenic form by decreasing the HDL cholesterol level and by increasing LDL and total cholesterol levels. Women who have experienced early menopause, either naturally or because they have had a hysterectomy, are twice as likely to develop heart disease as women of the same age group who have not yet gone through menopause. <> Among men and women, there are differences in body weight, height, body fat distribution, heart rate, stroke volume, and arterial compliance. In the very elderly, age related large artery pulsatility and stiffness is more pronounced in women. This may be caused by the smaller body size and arterial dimensions independent of menopause. Heart Disease