What we can learn from studying the Hand 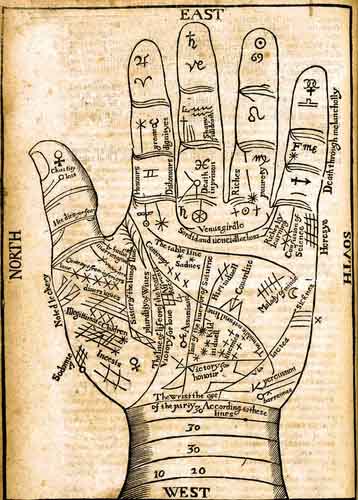 The evolution and development of the human hand is still been studied. As the hand evolved, so did the lines on the palm and the relationship between the fingers as all is connected. At some point this lead to the study of Palmistry and the understanding that thought creates the lines - as well as the way one holds their hand.

Hold the dominate hand (the one you write with) upward facing you and note the following:

the shape of the palm

the spacing between the fingers

are the fingers held firmly or cupped inward towards the palm

Palmistry teaches you how to explore your subconscious - past, present and future experiences. This is as much about science as pseudoscience. Everything is related to the messages received by the brain (a biochemical machine, or computer) and how they interact based on one's programming.


You may think you're pretty familiar with your hands. You may think you know them like the back of your hand. But as the following exercises derived from the latest hand research will reveal, your pair of bioengineering sensations still hold quite a few surprises up their sleeve.

Make a fist with your nondominant hand, knuckle side up, and then try to extend each finger individually while keeping the other digits balled up tight. For which finger is it extremely difficult, maybe even impossible, to comply?

Now hold your hand palm up, fingers splayed straight out, and try curling your pinky inward without bending the knuckles of any other finger. Can you do it?

Imagine you're an expert pianist or touch-typist, working on your chosen keyboard. For every note or letter you strike, how many of your fingers will move?

You're at your desk and, without giving it much thought, you start reaching over for your water bottle, or your pen. What does your hand start doing long before it makes contact with the desired object?

And a high-five to our nearest nonhuman kin:

What is the most important difference between a chimpanze's hands and our own?

(a) the chimpanzee's thumbs are not opposable;

(b) the chimpanzee's thumbs are shorter than ours; or

(c) the chimpanzee's thumbs are longer than ours.

On, then, to the answer key. The rare rubber joints notwithstanding, most people who attempt that first sequential digit-straightening exercise find that the thumb and index finger spring free of the fist with ease and that the middle and pinky fingers are not far behind, but that the ring finger is a stuck, stubborn mule: No matter how they struggle, it doesn't want to move.

By a similar token in challenge No. 2, a majority discover to their frustration that they just can't curl the pinky palmward without the joints of the ring finger flexing along for the ride.

Our fingers can seem like restless Ariels, so fast and dexterous you'd think they had plans and options of their own. Yet as scientists who study the performance, circuitry and evolution of the human hand have lately determined, the appearance of digital independence is deeply deceptive.

Not only are the ring and pinky fingers physically tethered together by a shared tendon, as anatomists long have known; measurements of neuromuscular activation patterns have shown that all fingers, including the ones with the greatest structural autonomy, the thumb and index finger, are keenly responsive to every flex and twitch of their neighboring digits.

"Even when you think you're moving just one finger," said Marc H. Schieber, a professor of neurology and neurobiology at the University of Rochester Medical Center, "you're really controlling your entire hand."

The pianist playing Ravel or the typist clacking on Blogspot? "People tend to think, they're hitting one key at a time, so they must be moving one finger at a time to hit that key. But really, all the fingers are in motion all the time."

For every keystroke, there's a movement of every finger. "Some of the movement is to strike the key," Dr. Schieber said, "others to lift fingers back up and away from the key, others to hold them away."

The brain also treats the hands as unified tools, often in ways of which we're not consciously aware. Scientists have shown that our hands start assuming the necessary configuration as soon as the brain initiates an activity - if not a micromoment earlier. If we're reaching for a water bottle, the hand takes on a generic open cupping shape, refining the curvature and angle of the gesture as the hand closes in on the bottle.

In groping for a pen, the thumb, index and middle fingers - the masters of fine-motor manipulations - form a preliminary pincer, while the ring finger and pinky (important for gripping bulkier objects, like bottles) tuck themselves politely under and out of the way. To appreciate the centrality of manual anticipation to the seamless performance of tasks, try blocking the pre-cupping maneuver as you reach for a glass, and see how clueless you and your hand will feel about how to proceed.

You will not, however, be all thumbs, or even half thumbs, for as research into the evolution of the human hand has shown, the thumb is what sets apart our hands from those of other apes. Not by being opposable - apes and many monkeys have opposable thumbs - but by being exceptionally long, strong and flexible.

"Our thumbs are relatively long and our fingers relatively short compared to a gorilla or chimpanzee," said Stephen J. Lycett, an anthropologist at the University of Kent in England. "That allows us to very strongly pinch an item, to a much greater degree than a chimp."

A strong pinch grip is at once powerful and precise, according to William D. Hopkins of the division of developmental and cognitive neuroscience at Yerkes National Primate Research Center in Atlanta. For all a chimpanzee's impressive arm strength, he said, humans are much better at wielding a hammer to crack open a nut. And once the nut is open, we are better at deftly pinch-gripping the meat.

Give the thumb two thumbs up. "When we lose a thumb, we lose half if not more of the functionality of the hand," said Lynette Jones, a hand specialist at the Massachusetts Institute of Technology. This is why people who have lost a thumb often opt to have another finger or a great toe transplanted into its place.

The hard-working digit pays a price for its diligence. In this country, said Dr. Steven J. McCabe, the past president of the American Association for Hand Surgery, almost everyone ends up with arthritis at the base of the thumb by late middle age.

The human hand is a tool gripper and a fact finder, so richly embedded with sensors that it has been compared to the fovea of the retina, the part of the eye with the highest concentration of light receptors. The hair-free skin of each hand holds about 17,000 mechanoreceptors, specialized nerve endings that can detect tiny vibrations, pressure changes, microscopic bumps and slurries, the touch of a mosquito's leg.

"If you want to find out about texture, to distinguish silk from polyester," Dr. Jones said, "you can't resolve it visually, and so you touch it with your hands."

Hands are bone-rich, too, the 27 bones of the hand and wrist representing the highest concentration of interlinked bones in the human body, according to Dr. McCabe. Moreover, the bones of the nonthumb fingers appear to have a mathematical bent, the ratios between them conforming in many people to the Fibonacci sequence, a numerical relationship seen in such other spiraling shapes of nature as the nautilus shell, sunflower face and hurricane. If you wave your fingers in a cascade, like a magician, Dr. McCabe said, "you can see the spiral curve at work."

How and when we won our hands remains a lively field of research and debate. Jonathan Kingdon of Cambridge University has argued that about seven million to nine million years ago, long before our brains got big or our bipedalism took hold, our hands distinguished our ancestors from the apes, allowing the prehominids to forage nimbly and discriminatingly as they squatted and "bumshuffled" over the forest floor.

In a 2010 report in the journal Evolution, researchers from the University of Calgary in Alberta argued that bipedalism came first, and that the changes in the human foot and toes needed to support an upright posture incidentally gave us our characteristic finger proportions and elongated thumbs: Similar genetic instructions dictate the layout of our hands and our feet.

More recently, Dr. Lycett and Alastair Key presented evidence in The Journal of Archaeological Science from their studies of tool use among college students that suggests our hands are most likely the handiwork of a gene-culture coevolutionary loop. By this argument, as our ancestors started tinkering with the first flint-knapped stone tools, the tools became a selective force, favoring individuals whose hands could most efficiently use them, and whose handy offspring in turn built better tools.

Our hands are still restless, still evolving, worth a standing ovation but with room to improve. I say we lose the thumb arthritis and loosen the ring finger's chain.