Reality is a holographic grid program created by consciousness that repeats in cycles and can be best understood by studying Sacred Geometry. The grids are a matrix of sound, light and color through which we virtually experience and learn. In physical reality grids are electromagnetic energy thus creating polarity or duality of experience, always seeking to restore balance and forever in (spiraling) motion. Grids never stop creating programs of experience. 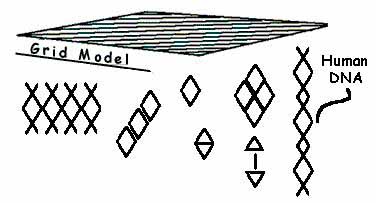 This illustration a representation of an energetic grid plate having no boundaries, beginning, nor end, drawn this way for the sake of explanation. Grids are the very essence and fabric of the universe - the force that connects all.

The Grid provides unconscious awareness at the multidimensional levels of experience available in the programs of reality. Grid shimmers with "current" known as Grid Flux.

Placed vertically this grid forms a four-sided diamond shape. It is the interlaced woven matrix of Universal Essence. When energy flows unobstructed, the flux remains relativity even, though there is always intonation at all times. You can also see examples of how the shape forms other geometry for manifestation. Human DNA is configured by this geometry. In order for the flux to have different levels of intonation there must be a catalysis of some kind.

Space tells matter how to move. Matter tells space how to curve. Matter is the "densification" of energy. Thought and action are two of the different types of catalysts. There must be movement of some kind to effect change. Change as we perceive it differs universally. Different "Laws" affect the consciousness of the grids - balance, neutrality as well as immutable laws - codes of energy that once put into motion cannot be stopped and must play out to the end of the program. How the laws effect us is in equal ratio to our own energy patterns. Laws of Attraction apply here and what determines them is all our thoughts and actions and the types of experiences to which we have engaged whether it is this lifetime or another. Immutable energies can not be stopped, there are loop holes and they can be, in certain incidences, be alteration as to the way the event is channeled (to some degree) but not stopped completely. 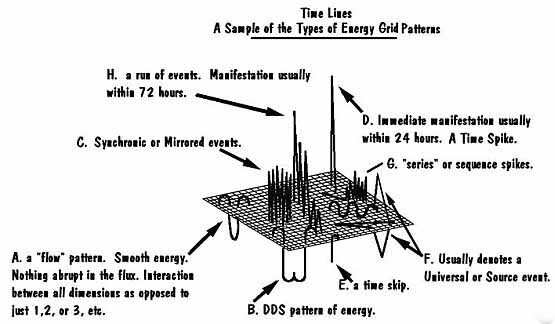 "A" is a Flow Line. It usually represents an even energy flux. If I see this it means that expression is moving in harmony without much impedance.

"B" demonstrates a DDS or Dynamic Dimensional Space gird. This line usually sparks the initiation of a telepathic or telekinetic event.

"C" -- In a synchronic or mirrored event it means that events have connection or are linked in ways other than regular sequence like flow lines are. Synchronicity is an event that singles itself out to have importance to us bridging the abyss from the unconscious to outer consciousness of reality in our everyday lives. It grabs our attention if you will. The feeling of "dejavu" is a fine example of this type of expression. Synchronicity shows itself in creative manifestations, by images, sounds, or events that are all linked by ones observation and it brings one to a higher level of awareness and reality about themselves others are some thing.

The spike in the grid as illustrated in illustration "D", represents a twenty-four hour event. It is usually sharp a spiked very high off the grid.

"E" is a time skip that is to say these energies skip and go out of phase or pattern. They are somewhat more unpredictable than any of the other lines and karma plays an incredible amount in these types of grid markers.

"F" tends to be a Universal event or connection. Sometimes events that are traditional religious, or spiritual comprised manifest this way first.

"G" represents a series or 'sequenced" event. This means that there will be a repartition in the pattern or a string of events that will "appear" to happen one after the other.

"H" Represents a series of events that take about 72 hours to manifest on the physical earth plane. They are usual linked by similar resonance and follow a spiked pattern that shows intensity. Usual the more spiked the pattern the more obtrusive the event upon the earth plane RT line. There are so many other different patterns. I have only represented a few here just for the sake of explanation of this topic. 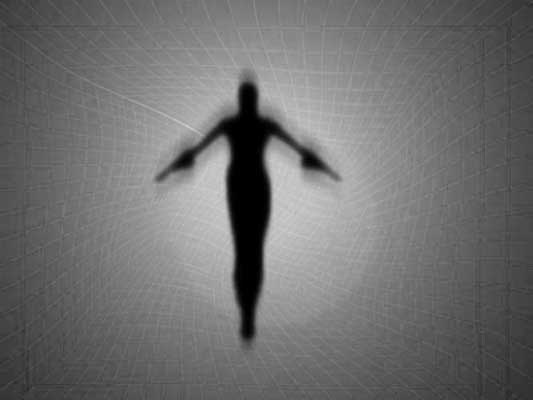