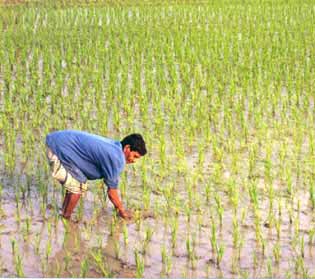 The Green Revolution usually refers to the transformation of agriculture that began in 1945. One significant factor came at the request of the Mexican government to establish an agricultural research station to develop more varieties of wheat that could be used to feed the rapidly growing population of the country. In 1943 Mexico imported half its wheat; in 1956, the Green Revolution had made Mexico self-sufficient; by 1964, Mexico exported half a million tons of wheat.The associated transformation has continued as the result of programs of agricultural research, extension, and infrastructural development, instigated and largely funded by the Rockefeller Foundation, along with the Ford Foundation and other major agencies.

With the experience of agricultural development begun in Mexico by Norman Borlaug in 1943 judged as a success, the Rockefeller Foundation sought to spread the Green Revolution to other nations. The Office of Special Studies in Mexico became an informal international research institution in 1959, and in 1963 it formally became CIMMYT, The International Maize and Wheat Improvement Center.

In 1961 India was on the brink of mass famine. Norman Borlaug was invited to India by the adviser to the Indian minister of agriculture M. S. Swaminathan. Despite bureaucratic hurdles imposed by India's grain monopolies, the Ford Foundation and Indian government collaborated to import wheat seed from CIMMYT. Punjab was selected by the Indian government to be the first site to try the new crops because of its reliable water supply and a history of agricultural success. India began its own Green Revolution program of plant breeding, irrigation development, and financing of agrochemicals.

India soon adopted IR8 - a rice semi-dwarf variety developed by the International Rice Research Institute(IRRI) that could produce more grains of rice per plant when grown properly with fertilizer and irrigation. In 1968, Indian agronomist S.K. De Datta published his findings that IR8 rice yielded about 5 tons per hectare with no fertilizer, and almost 10 tons per hectare under optimal conditions. This was 10 times the yield of traditional rice.[6] IR8 was a success throughout Asia, and dubbed the "Miracle Rice". In the 1960s, rice yields in India were about two tons per hectare; by the mid-1990s, they had risen to six tons per hectare. In the 1970s, rice cost about $550 a ton; in 2001, it cost less than $200 a ton. India became one of the world's most successful rice producers, and is now a major rice exporter, shipping nearly 4.5 million tons in 2006.

Famine in India, once accepted as inevitable, has not returned since the introduction of Green Revolution agriculture.

Philippines - In 1960, the Government of the Republic of the Philippines with Ford and Rockefeller Foundations established IRRI. A rice crossing between Dee-geo-woo-gen and Peta was done at IRRI in 1962. In 1966, one of the breeding lines became a new cultivar, IR8. IR8 required the use of fertilizers and pesticides, but produced substantially higher yields than the traditional cultivars. Annual rice production in the Philippines increased from 3.7 to 7.7 million tonnes in two decades. The switch to IR8 rice made the Philippines a rice exporter for the first time in the 20th century. At the same time, heavy pesticide use reduced the number of fish and frog species found in rice paddies.

There have been numerous attempts to introduce the successful concepts from the Mexican and Indian projects into Africa. These programs have generally been less successful, for a number of reasons. Reasons cited include widespread corruption, insecurity, a lack of infrastructure, and a general lack of will on the part of the governments. Yet environmental factors, such as the availability of water for irrigation, the high diversity in slope and soil types in one given area are also reasons why the Green Revolution is not so successful in Africa.

A recent program in western Africa is attempting to introduce a new high-yield variety of rice known as "New Rice for Africa"(NERICA). NERICAs yield about 30% more rice under normal conditions, and can double yields with small amounts of fertilizer and very basic irrigation. However the program has been beset by problems getting the rice into the hands of farmers, and to date the only success has been in Guinea where it currently accounts for 16% of rice cultivation.

The projects within the Green Revolution spread technologies that had already existed, but had not been widely used outside of industrialized nations. These technologies included pesticides, irrigation projects, synthetic nitrogen fertilizer and improved crop varieties developed through the conventional (that is, not using biotechnology), science-based breeding methods available at the time.

Agronomists bred cultivars of maize, wheat, and rice that are generally referred to as HYVs or high-yielding varieties. HYVs have an increased nitrogen-absorbing potential compared to other varieties. Since cereals that absorbed extra nitrogen would typically lodge, or fall over before harvest, semi-dwarfing genes were bred into their genomes. A Japanese dwarf wheat cultivar (Norin 10 wheat), which was sent to Washington by Cecil Salmon, was instrumental in developing Green Revolution wheat cultivars. IR8, the first widely implemented HYV rice to be developed by IRRI, was created through a cross between an Indonesian variety named Peta and a Chinese variety named Dee-geo-woo-gen.

Cereal production more than doubled in developing nations between the years 1961-1985. Yields of rice, maize, and wheat increased steadily during that period. The production increases can be attributed roughly equally to irrigation, fertilizer, and seed development, at least in the case of Asian rice.

While agricultural output increased as a result of the Green Revolution, the energy input into the process (that is, the energy that must be expended to produce a crop) has also increased at a greater rate, so that the ratio of crops produced to energy input has decreased over time. Green Revolution techniques also heavily rely on chemical fertilizers, pesticides and herbicides, some of which must be developed from fossil fuels, making agriculture increasingly reliant on petroleum products.

Proponents of the Peak Oil theory fear that a future decline in oil and gas production would lead to a decline in food production or even a Malthusian catastrophe.

The effects of the Green Revolution on global food security are difficult to understand because of the complexities involved in food systems.

The world population has grown by about four billion since the beginning of the Green Revolution and most believe that, without the Revolution, there would be greater famine and malnutrition. India saw annual wheat production rise from 10 million tons in the 1960s to 73 million in 2006. The average person in the developing world consumes roughly 25% more calories per day now than before the Green Revolution. Between 1950 and 1984, as the Green Revolution transformed agriculture around the globe, world grain production increased by 250%.

The production increases fostered by the Green Revolution are widely credited with having helped to avoid widespread famine, and for feeding billions of people.