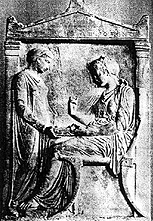 Slavery played a major role in ancient Greek civilization. Slaves could be found everywhere. They worked not only as domestic servants, but as factory workers, shopkeepers, mineworkers, farm workers and as ship's crewmembers.

There may have been as many, if not more, slaves than free people in ancient Greece. It is difficult for historians to determine exactly how many slaves there were during these times, because many did not appear any different from the poorer Greek citizens.

There were many different ways in which a person could have become a slave in ancient Greece. They might have been born into slavery as the child of a slave.

They might have been taken prisoner if their city was attacked in one of the many battles which took place during these times. They might have been exposed as an infant, meaning the parents abandoned their newborn baby upon a hillside or at the gates of the city to die or be claimed by a passerby.

This method was not uncommon in ancient Greece. Another possible way in which one might have become a slave was if a family needed money, they might sell one of the children into slavery.

Usually it was a daughter because the male children were much needed to help out with the chores or the farm. Kidnapping was another fairly common way in which one could have been sold into slavery.

Slaves were treated differently in ancient Greece depending upon what their purpose was.

If one was a household servant, they had a fairly good situation, at least as good as slavery could be. They were often treated almost as part of the family.

They were even allowed to take part in the family rituals, like the sacrifice.

They were always supervised by the woman of the house who was responsible for making sure that all the slaves were kept busy and didn't get out of line.

This could be quite a task as most wealthy Greek households had as many as 10-20 slaves.

There were limits to what a slave could do. They could not enter the Gymnasium or the Public Assembly.

They could not use their own names, but were assigned names by their master.

Not all forms of slavery in ancient Greece were as tolerable as that of the domestic servant.

The life of a mineworker or ship's crewmember was a life of misery and danger.

These people usually did not live long because of the grueling work and dangerous conditions of their work.

Often those forced into these conditions were those condemned to death for committing crimes because it was understood that they wouldn't live very long under these circumstances.

It is surprising to note that the police force in ancient Athens was made up mainly of slaves.

Even the clerks at the treasury office were slaves.

Slavery was a very important part of ancient Greece. It played a major role in so many aspects of Greek civilization from domestic living to the infamous Athenian naval fleet.

The price one might have paid for a slave in ancient Greek times varied depending on their appearance, age and attitude.

Those who were old, weak and stubborn might have sold for as little as 1/2 a mina ($9.00). If there happened to be a large supply of slaves on the market, the price automatically went down.

This usually happened after winning a large battle, when there were many prisoners of war.

Traditionally, studies of Ancient Greece focus on the political, military and cultural achievements of Greek men. Unfortunately, the information we have about ancient Greek women is biased because it comes from various sources such as plays, philosophical tracts, vase paintings and sculptures which were completed by males. From these sources, we can conclude that Greek society was highly stratified in terms of class, race, and gender.

The segregation of male and female roles within ancient Greece was justified by philosophical claims of the natural superiority of males. As we shall learn, slave women were at a disadvantage in Greek society not only because of their gender but also because of their underprivileged status in the social hierarchy.

Slave labor was an essential element of the ancient world. While male slaves were assigned to agricultural and industrial work, female slaves were assigned a variety of domestic duties which included shopping, fetching water, cooking, serving food, cleaning, child-care, and wool-working. In wealthy households some of the female servants had more specialized roles to fulfil, such as housekeeper, cook or nurse.

As Xenophon's Oceonomicus reveals, slaves were even prohibited from marrying, as marriage was deemed the social privilege of the elite citizens of Athens.

In addition to their official chores in the household, slave girls also performed unofficial services. For example, there is evidence that close relationships developed between female slaves and their mistresses. Given the relative seclusion of upper-class women in the private realm of their homes, many sought out confidantes in their slave girls.

For example, Euripedes' tragic character of Medea confided her deepest feelings with her nurse, who both advised and comforted her in her troubled times. Furthermore, slaves always accompanied their mistresses on excursions outside of the home.

Tombstones of upstanding Athenian women often depict scenes of familiarity between the deceased and her slave companion. It is likely that a sense of their common exclusion from the masculine world of public affairs would have drawn women together, regardless of class. The only public area in which women were allowed to participate was religion.

Slave women were included in some religious affairs and could be initiated to the Eleusinian Mysteries which celebrated the myth of Persephone.

Thus, the fate of a Greek slave girl was determined by circumstance and more or less rested in the hands of her owners, who had the power to shape her existence.