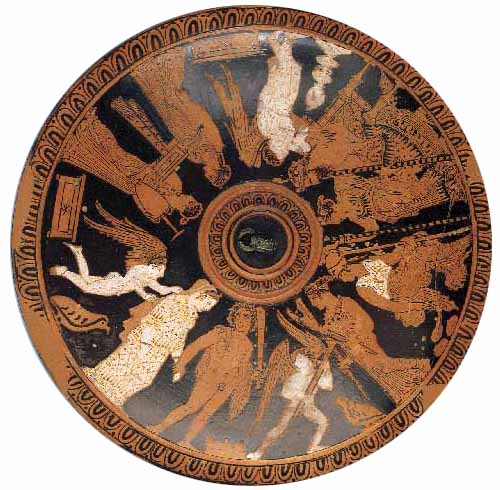 Wheel of Life and Karma


The ancient Greeks were a deeply religious people. They worshipped many gods whom they believed appeared in human form and yet were endowed with superhuman strength and ageless beauty.

The Iliad and the Odyssey, our earliest surviving examples of Greek literature, record men's interactions with various gods and goddesses whose characters and appearances underwent little change in the centuries that followed.

The Greeks attributed these epic narratives to Homer, a poet living at the end of the 8th century BC Each Greek city was normally under the protection of one or more individual deities who were worshipped with special emphasis, as, for example, Athens and the goddess Athena.

While many sanctuaries honored more than a single god, usually one deity such as Zeus at Olympia or a closely linked pair of deities like Demeter and her daughter Persephone at Eleusis dominated the cult place.

Elsewhere in the arts, various painted scenes on vases, and stone, terracotta and bronze sculptures portray the major gods and goddesses.

The deities are depicted either by themselves or in traditional mythological situations in which they interact with humans and a broad range of minor deities, demi-gods and legendary characters.