The Olympic Games, or Olympics, is an international multi-sport event taking place every four years and comprising summer and winter games. Originally held in ancient Greece, they were revived by a French nobleman, Pierre Fredy, Baron de Coubertin in the late 19th century. The Games of the Olympiad, better known as the Summer Olympics, have been held every fourth year since 1896, with the exception of the years during the World Wars.A special edition for winter sports, the Olympic Winter Games, was established in 1924. Originally these were held in the same year as the Summer Olympics, but starting with 1994 the Winter Games are in between, two years after the Games of the Olympiad.

The Ancient Olympic Games were an athletic and religious celebration held in the Greek town of Olympia from (historically) as early as 776 BC to 393 AD.

The historical origins of the Ancient Olympic Games are lost in the fog of time, but several legends and myths survive.

One of these tells of the hero Heracles, who won a race at Olympia and then decreed that the race should be re-enacted every four years, while another claims that deity Zeus had instated the festival after his defeat of the Titan Cronus.

Another myth tells of King Iphitos of Elis, who consulted the Pythia - the oracle of Delphi - to try and save his people from war in the 9th century BC. The prophetess advised him to organise games in honour of the gods. The Spartan adversary of Iphitos then decided to stop the war during these games, which were called Olympic, after Mount Olympus, the mountain on which the Greek gods were said to live.

Other Greeks claimed the games were held in honour of Pelops, king of Olympia and eponymous hero of the Peloponnesus. King Oenomaus had challenged his daughter Hippodamia's suitors to a race, under pain of killing the loser. The Fourteenth suitor, Pelops, invoked the help of Poseidon, his old lover, who provided him with divine horses and chariot. Pelops then bribed Oenomaus' charioteer Myrtilus, who switched the lynchpins from Oenomaus' chariot with pins made of beeswax: predictably the lynchpins melted during the race and Oenomaus was killed. Pelops married the princess but not before murdering Myrtilus, whose curse later resulted in the fall of the house of Atreus and the suffering of Oedipus.

Whatever the origin, the games were held to be one of the two central rituals in Ancient Greece, the other being the Eleusinian Mysteries.

The Games were held in Olympia, Greece, a sanctuary site for the Greek gods near the towns of Elis and Pisatis (both in Elis on the peninsula of Peloponnesos). The Sanctuary of Zeus in Olympia housed a 12 meter high statue in ivory and gold of Zeus, the father of the Greek gods, sculpted by Phidias. This statue was one of the ancient Seven Wonders of the World.

The first written accounts of the Olympic Games date from 776 BC, although it is sure that these Games were not the first ones to be held. The Olympic Games were held in four year intervals, and later the Greek method of counting the years even referred to these Games, using the term Olympiad for the period between two Games.

The Greeks in historical times used the Olympiads to count years, much as we today use AD and BC. Thus, by that chronology, the first Olympiad would have taken place in 919 BC.The only competition held then was the stadion race, a race over about 190 meters, measured after the feet of Hercules. The word stadium is derived from this foot race.

Several groups fought over control of the sanctuary, and hence the Games, for prestige and political advantage.

The Greek traveller Pausanias writes that in 668 BC, Pheidon of Argos was commissioned by the town of Pisa to capture the sanctuary from the town of Elis, which he did and then personally controlled the Games for that year. The next year Elis regained control.

The Athenian writer Xenophon in 364 BC gives a contemporary record of an Elean attack during the Pentathlon final of the Games themselves, as the Pisans were again in control. The Eleans pushed the defenders almost to the altar before retreating due to missiles being thrown at them from the porticos. During that night the defending Arcadians constructed defensive palisades, and the next morning on seeing the strength of the defence the Elians retreated.

In 12 BC Herod the Great gave financial support to the Games to enable its future survival.The Olympic Games were part of the Panhellenic Games, four separate games held at two- or four-year intervals but arranged so that there was at least one set of games every year. The Olympic Games were the most important and most prestigious of these.

Finally, in AD 394 the Olympic Games - one of the foundations of Greek religion, with their polytheistic observances - fell victim to the religious campaign of the Christian Roman emperor Theodosius I, which consisted of the violent obliteration of all surviving Pagan institutions.

Unlike the Modern Olympic Games, only men who spoke Greek were allowed to participate in the Ancient Games. They were to some extent "international", though, in the sense that they included athletes from the various Greek city-states. Additionally, participants eventually came from Greek colonies as well, extending the range of the games to far shores of the Mediterranean and of the Black Sea.

In order to be in the games one had to qualify and one's name written down in the lists. It seems that only young people were allowed to participate, as the Greek writer Plutarch relates that one young man was rejected for seeming too mature, and only after his boyfriend interceded with the king of Sparta, who presumably vouched for his youth, was he permitted to participate. Before being able to participate, everyone had to take an oath in front of the statue of Zeus saying that you had been in training for 10 months. 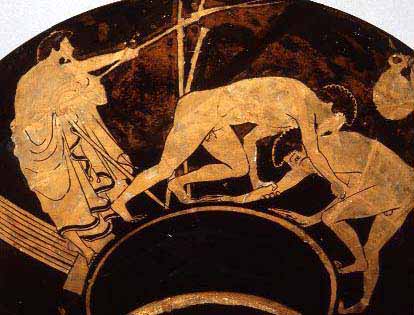 The "Boxer Vase" from Hagia Triada in Crete

In the chariot racing event, it was not the rider but the owner of the chariot and team who was considered to be the competitor, thus one man could win more than one of the top spots - as was the case with Alcibiades.

The addition of events meant the festival grew from 1 day to 5 days, 3 of which were used for competition. The other 2 days were dedicated to religious rituals. On the final day, there was a banquet for all of the participants, consisting of 100 oxen that had been sacrificed to Zeus on the first day.

The winner of an Olympic event was awarded an olive branch, and was often received with much honour throughout Greece and especially in his home town, where he was often granted large sums of money (in Athens, 500 drachma, a small fortune). Sculptors would create statues of Olympic victors, and poets would sing odes in their praise.

It is often said that wars were halted during the Games but this is not true; however, athletes, who were often soldiers, were permitted to leave the army to participate in the Games, and were guaranteed safe passage through enemy territory.

Participation in the games was limited to male athletes; the only way women were allowed to take part was to enter horses in the equestrian events. In 396 BC and again in 392 BC, the horses of a Spartan princess named Cynisca won her the four-horse race.

The athletes usually competed naked, not only as the weather was appropriate but also as the festival was meant to celebrate, in part, the achievements of the human body. Olive oil was occasionally used by the competitors, not only to keep skin smooth but also to provide an appealing look for the participants.


According to the tradition of Hippias of Elis ca. 400 BC, the events of the Olympic Games were added to the program in the following order.


The Myths Surrounding the Olympic Games

There are several Greek myths about how the games were started. The most common myth was the story of the hero Pelops, after whom the Peloponnese is named ("the isle of Pelops"). The story of Pelops was displayed prominently on the east pedimental sculptures of the Temple of Zeus.

Pelops was a prince from Lydia in Asia Minor who sought the hand of Hippodamia, the daughter of King Oinomaos of Pisa. Oinomaos challenged his daughter's suitors to a chariot race under the guarantee that any young man who won the chariot race could have Hippodamia as a wife. Any young man who lost the race would be beheaded, and the heads would be used as decoration for the palace of Oinomaos.

With the help of his charioteer Myrtilos, Pelops devised a plan to beat Oinomaos in the chariot race. Pelops and Myrtilos secretly replaced the bronze linchpins of the King's chariot with linchpins made of wax. When Oinomaos was about to pass Pelops in the chariot race, the wax melted and Oinomaos was thrown to his death. Pelops married Hippodamia and instituted the Olympic games to celebrate his victory. A different version of the myth refers to the Olympic games as funeral games in the memory of Oinomaos.

Another myth about the origin of the Olympic Games comes from the Tenth Olympian Ode of the poet Pindar. He tells the story of how Herakles, on his fifth labor, had to clean the stables of King Augeas of Elis. Herakles approached Augeas and promised to clean the stables for the price of one-tenth of the king's cattle. Augeas agreed, and Herakles rerouted the Kladeos and Alpheos rivers to flow through the stables. Augeas did not fulfill his promise, however, and after Herakles had finished his labors he returned to Elis and waged war on Augeas. Herakles sacked the city of Elis and instituted the Olympic Games in honor of his father, Zeus. It is said that Herakles taught men how to wrestle and measured out the stade, or the length of the footrace.

Pierre de Fredy, the Baron de Coubertin, was the founder of the modern Olympic Movement. He was born in 1863 to a French aristocrat family. He was an avid sportsman as a young man with rowing being one of his favorites. Influenced by the events of the late 19th century and his education, Coubertin developed a passionate belief that sport possessed the power to benefit humankind and encourage peace among the nations of the world.

Coubertin drew his inspiration from the ancient Olympic Games. After visits to England and the United States, Coubertin formulated a plan to revive the Games. His vision was realized, in June 1894, when delegates meeting in Paris voted to hold modern Olympic Games at Athens in 1896.

Coubertin was the driving force behind the fledgling Olympic Movement. He became president of the International Olympic Committee in 1896 and held that post for 29 years. Over that time, Coubertin committed his life and his fortune to the establishment and growth of the modern Olympic Games. He died in Geneva, Switzerland in 1937.

Though Coubertin never approved of women competing in the Olympic Games, he fought ferociously for the ideals of Olympism. His vision and determination created a movement that has, like no other, united the athletes and nations of the world in peaceful celebration and competition.

The year in which the Olympic Games are to be held cannot be changed. If the Games are canceled for any reason, the number of the Olympiad remains. Although World War I preempted the 1916 Games, the period from 1912 to 1916 remains the VI Olympiad of the modern era.

The term Olympic actually is an adjective, not a noun. Properly speaking, an athlete competes in the Olympic Games, not the Olympics. The phrases Summer and Winter Olympics are commonly used, but they are technically incorrect references to the Games of the Olympiad and the Olympic Winter Games.