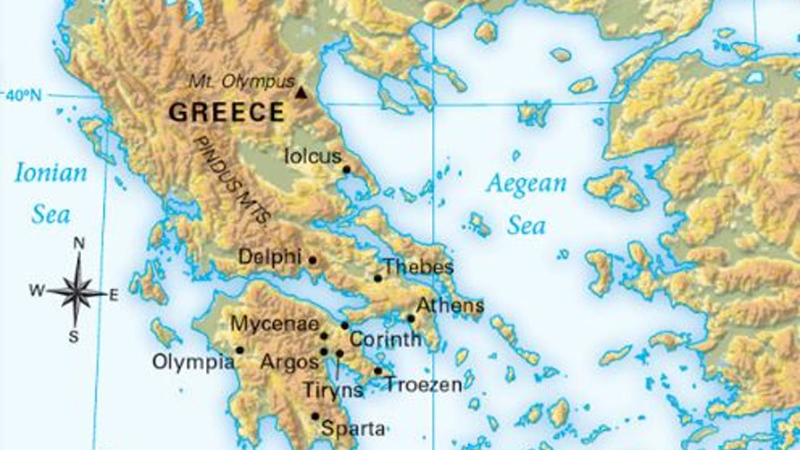 Greece consists of a large mainland at the southern end of the Balkans; the Peloponnesus peninsula (separated from the mainland by the canal of the Isthmus of Corinth); and numerous islands (around 3,000), including Crete, Rhodes, Kos, Euboea and the Dodecanese and Cycladic groups of the Aegean Sea as well as the Ionian sea islands. Greece has more than 15,000 kilometres of coastline and a land boundary of 1,160 kilometres.

About 80% of Greece consists of mountains or hills, thus making Greece one of the most mountainous countries of Europe. Western Greece contains lakes and wetlands. Pindus, the central mountain range, has a maximum elevation of 2,636 m. The Pindus can be considered as a prolongation of the Dinaric Alps. The range continues by means of the Peloponnese, the islands of Kythera and Antikythera to find its final point in the island of Crete. (Actually the islands of the Aegean are peaks of underwater mountains that once consisted an extension of the mainland).

The Central and Western Greece area contains high, steep peaks dissected by many canyons and other karstic landscapes, including the Meteora and the Vikos gorge the later being the second largest one on earth after the Grand Canyon in the US. 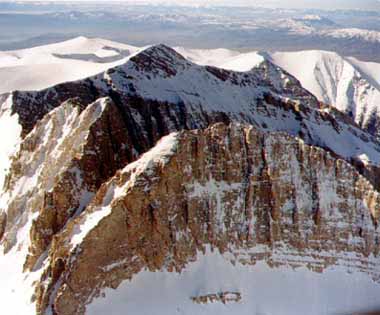 Mount Olympus forms the highest point in Greece at 2,919 metres above sea level. Also northern Greece presents another high range, the Rhodope, located in Eastern Macedonia and Thrace; this area is covered with vast and thick century old forests like the famous Dadia.
Plains are mainly found in Eastern Thessaly, Central Macedonia and Thrace.Greece's climate is divided into three well defined classes the Mediterranean, Alpine and Temperate, the first one features mild, wet winters and hot, dry summers. Temperatures rarely reach extremes, although snowfalls do occur occasionally even in Athens, Cyclades or Crete during the winter.

Alpine is found primarily in Western Greece (Epirus, Central Greece, Thessaly, Western Macedonia as well as central parts of Peloponessus like Achaea, Arkadia and parts of Lakonia where the Alpine range pass by). Finally the temperate climate is found in Central and Eastern Macedonia as well as in Thrace at places like Komotini, Xanthi and northern Evros; with cold, damp winters and hot, dry summers. It's worth to mention that Athens is located in a transition area between the Mediterranean and Alpine climate, thus finding that in its southern suburbs weather is of Mediterranean type while in the Northern suburbs of the Alpine type.

About 50% of Greek land is covered by forests with a rich varied vegetation which spans from Alpine coniferous to mediterranean type vegetation.

Seals, sea turtles and other rare marine life live in the seas around Greece, while Greece's forests provide a home to Western Europe's last brown bears and lynx as well as other species like Wolf, Roe Deer, Wild Goat, Fox and Wild Boar among others. 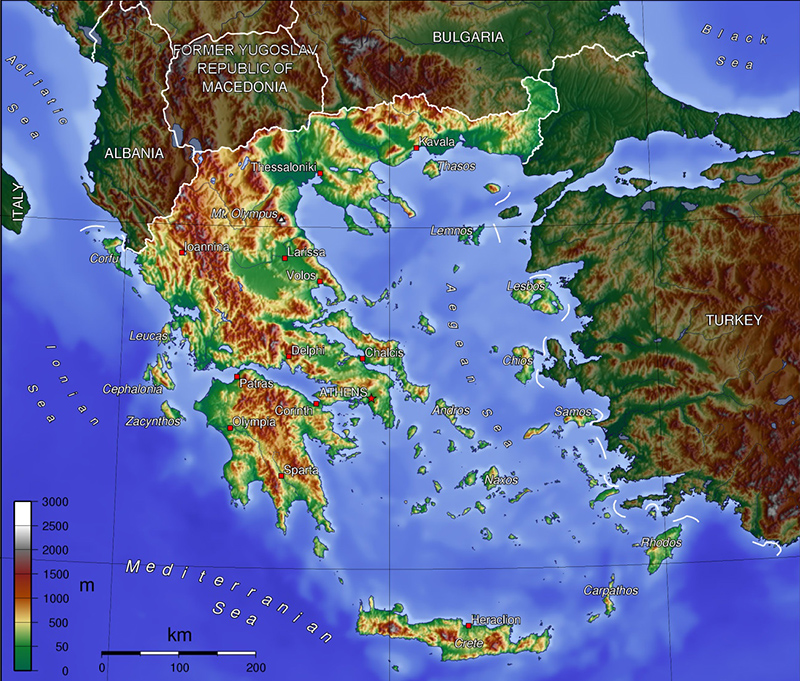 The main physical geographic features of Ancient Greece are mountains, islands, and the sea. The mountains of Ancient Greece separated people geographically. Because of this, Greek city-states tended to be isolated from one another. This meant that societies grew and developed independently. City-states had their own governments. So, without a central government, there was no plan to create a big empire, as we often imagine with respect to Ancient Greece.

We begin to look at the geography of ancient Greece by examining how Greeks lived on their farms, why they traded, road systems, and the plant life that ancient Greece had. Geography has always had a great influence on Greece and its inhabitants. It is largely responsible for numerous continuities in its extensive history. While the mountains that split the Greek lands have contributed to localism they have been a major barrier to unity as a nation. The struggle of communication by land and the significant presence of the sea have made mariners out of Greeks for numerous generations. The natural resources ensure a steady flow of abundance and guarantee sustenance if governed wisely.

In ancient Greece, many cities had land that was used for farming within the city, but most of the people lived in small towns and villages outside of the city. Archeological survey indicates that there were even smaller settlements such as hamlets (very small villages), and isolated farms which were only lived in seasonally. According to this information, there would have been many villages, hamlets, single farms, and occasional small towns scattered over the land; as can still be seen in Crete.

The Greeks had their private space that consisted of the agricultural fields in the territory of the polis and their houses compacted in settlements, whether in the central town of the city-state, in smaller towns, or villages. Ancient Greeks preferred to live in such compacted settlements, even when agriculture was their main source of support. Occasionally, there has been evidence of how agricultural land was organized by the residents of the settlements in rectangular and equal lots. The idea was that each family would farm a single plot of land. But, there was a tendency for farmland to become divided and for a landowner to own many plots of land scattered all over the community.

The land was organized for mules and donkeys with built mule-tracks reaching every settlement. Since the Bronze Age, there had been chariots and wagons with roads that that were easy to drive on, but the roads were not easy to drive on. Classical Greek roads were more complete with grooves cut for the wheels in steep and rocky places. The road system, the landscape, the markets, and the farms were all part of the geography of ancient Greece. 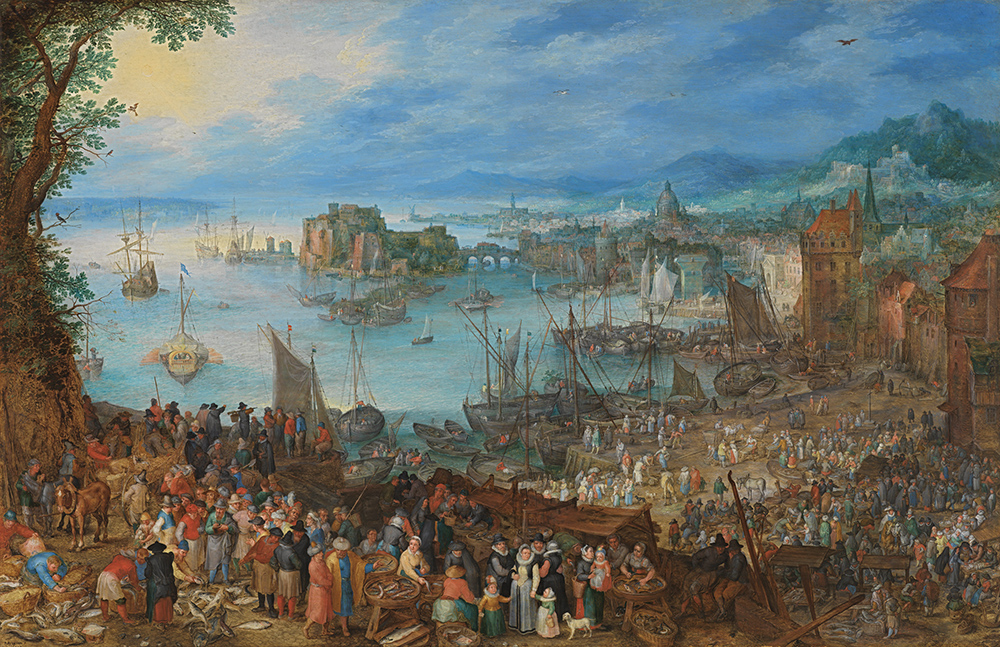 Greece has thousands of islands. Ancient Greeks became a sea-going people due to the close proximity of the sea to most Greek city-states. These merchants and traders developed a sense of freedom and independence not seen before. Access to the sea meant that Ancient Greece could grow economically. ThatŐs because being on the sea allows for many ports to be built for trade.

The Greeks also became good mariners and were able to use their skills to trade with other city-states. Ancient Greeks used to travel via the Aegean Sea from city to city. In addition to being an important trade route, the sea was full of seafood. From the mountains to the sea and islands, the geography of Ancient Greece was very unique. It played a large role with respect to the establishment of a strong trade-based economy, along with the development of politics and society as a whole.