Although gravitational radiation has not been directly detected, there is indirect evidence for its existence. For example, measurements of the HulseĐTaylor binary system suggest that gravitational waves are more than a theoretical concept. Other potential sources of detectable gravitational waves include binary star systems composed of white dwarfs, neutron stars, and black holes. As of 2016, various gravitational-wave detectors are under construction or in operation, such as Advanced LIGO which began observations in September 2015. Read More

Gravitational waves point scientists to elusive missing-link black hole   Space.com - September 2, 2020
Since 2015, astrophysicists have been using gravitational-wave detectors to "hear" chirp-like signals and decode massive collisions that send subtle ripples across spacetime. Now, scientists have heard a new kind of sound, a fast, deep "bang" that could unlock even more cosmic secrets, according to new research from the Laser Interferometer Gravitational-wave Observatory (LIGO) and its European counterpart, Virgo.

Einstein's waves detected in star smash   BBC - October 17, 2017
Scientists have detected the warping of space generated by the collision of two dead stars, or neutron stars. They have confirmed that such mergers lead to the production of the gold and platinum that exists in the Universe. The measurement of the gravitational waves given off by this cataclysmic event was made on 17 August by the LIGO-VIRGO Collaboration. The discovery enabled telescopes all over the world to capture details of the merger as it unfolded. David Reitze, executive director of the LIGO Laboratory at Caltech in Pasadena, California, said: "This is the one we've all been waiting for."
Einstein's waves win physics Nobel
Gravitational waves quest to go into space
Getting your head around Einstein's waves
Gravitational waves: A triumph for big science

Gravitational waves: So many new toys to unwrap   BBC - October 17, 2017
Whenever there's a big science discovery, it's always nice to get a historical perspective. And so here goes with the remarkable observation of gravitational waves emanating from the merger of two dead stars, or neutron stars, some 130 million light-years from Earth. It's 50 years since the existence of these stellar remnants was confirmed (July 1967) by the mighty Northern Irish astronomer Jocelyn Bell Burnell. It's more than 40 years since we realized neutron stars might occur in pairs, or binaries, as we call them.


'New chapter in astrophysics' as scientists detect gravitational waves created by a titanic gold-producing neutron star collision 130 million light years away   Daily Mail - October 16, 2017
Scientists yesterday discovered a vast supply of gold on the far side of the universe. The extraordinary hoard is the result of a huge collision between two ultra-dense neutron stars. The resulting gravitational waves and radiation flash were picked up by powerful detectors and telescopes on Earth and in orbit. The explosion happened 130 million years ago in the Hydra constellation, which is so far away that the light and the ripples in space and time have only just reached us.

The gold created by the blast is estimated to weigh more than the whole of the Earth's mass. Huge quantities of platinum, uranium and other heavy elements such as lead were also created. Scientists not only 'heard' the phenomenon by measuring vibrations in space-time, they also used satellite and ground-based telescopes to see light and radiation pouring out of the stellar fireball, dubbed a 'kilonova'. Excited astronomers talked of opening a 'new chapter in astrophysics' and unlocking a 'treasure trove' of new science. The discovery will help scientists better understand the inner workings and emissions of neutron stars, as well as more fundamental physics such as general relativity and the expansion of our universe. One scientists suggests the event 'will be remembered as one of the most studied astrophysical events in history.'


First gravitational waves form after 10 million years   PhysOrg - September 5, 2016
If two galaxies collide, the merging of their central black holes triggers gravitational waves, which ripple throughout space. An international research team has now calculated that this occurs around 10 million years after the two galaxies merge - much faster than previously assumed. In his General Theory of Relativity, Albert Einstein predicted gravitational waves over a century ago; this year, they were detected directly for the first time: The American Gravitational Wave Observatory LIGO recorded such curvatures in space from Earth, which were caused by the merging of two massive black holes. The research on gravitational waves - and thus the origin of the universe - continues: From 2034 three satellites are to be launched into space in a project headed by the European Space Agency (ESA) to measure gravitational waves at even lower frequency ranges from space using the Evolved Laser Interferometer Space Antenna.


Gravitational waves open 'a window on the universe,' scientists say   CNN - February 11, 2016
Just over 100 years after he published his general theory of relativity, scientists have found what Albert Einstein predicted as part of the theory: gravitational waves. he gravitational waves -- ripples in space-time -- were created by the merging of two black holes, Reitze said. One black hole had the mass of 29 suns; the other was the equivalent of 36 suns. Each was perhaps 50 kilometers (30 miles) in diameter. More than a billion years ago -- LIGO estimates about 1.3 billion -- the two collided at half the speed of light. Gravitational waves pass through everything, so the result traveled through the universe for that time before reaching Earth. 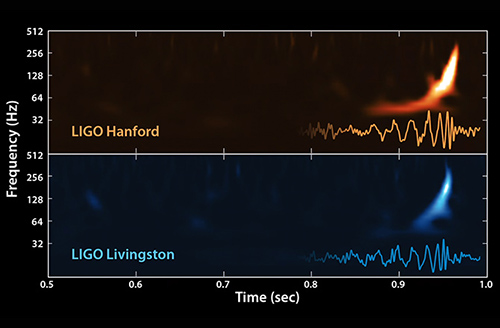 Today will go down in the history books as the day we directly detected gravitational waves. The discovery, made by scientists of the LIGO Science Collaboration, is a Nobel Prize-worthy event that equals, and maybe even surpasses, the discovery of the Higgs boson in 2012 and the realization by Edwin Hubble in 1929 that the universe is expanding.

Demonstration: Einstein's gravitational waves 'seen' from black holes   BBC - February 11, 2016
Scientists are claiming a stunning discovery in their quest to fully understand gravity. They have observed the warping of space-time generated by the collision of two black holes more than a billion light-years from Earth. The international team says the first detection of these gravitational waves will usher in a new era for astronomy. It is the culmination of decades of searching and could ultimately offer a window on the Big Bang.

Gravitational waves detected 100 years after Einstein's prediction   Science Daily - February 11, 2016
For the first time, scientists have observed ripples in the fabric of spacetime called gravitational waves, arriving at Earth from a cataclysmic event in the distant universe. This confirms a major prediction of Albert Einstein's 1915 general theory of relativity and opens an unprecedented new window onto the cosmos.

Major scientific announcement could validate Einstein   CNN - February 11, 2016
On Thursday, scientists are expected to declare they have detected gravitational waves. Not only will such a discovery support a prediction that's essential to Albert Einstein's general theory of relativity, but it will also add to our understanding of the universe. In physics, gravitational waves are ripples in the curvature of spacetime which propagate as waves, traveling outward from the source. Predicted in 1916 by Albert Einstein on the basis of his theory of general relativity, gravitational waves theoretically transport energy as gravitational radiation. Read more ...


The music of gravitational waves   BBC - September 18, 2015
The Advanced Ligo experiment, which aims finally to detect ripples in the fabric of space-time, is up and running. Gravitational waves are a prediction of Einstein's Theory of General Relativity, and should be generated by violent events, such as the merger of black holes and neutron stars. The frequency of many waves is expected to be around 100 Hz, which means that scientists can describe these cosmic phenomena in terms of sound because that frequency is in the human auditory band. Ligo scientist Vern Sandberg explained this concept to our correspondent Aleem Maqbool.