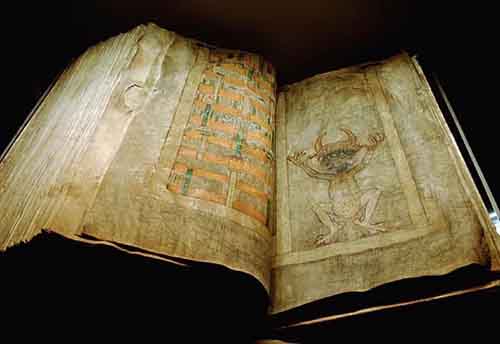 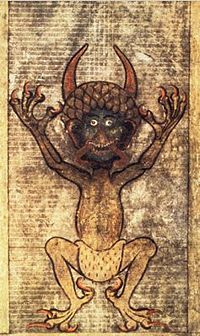 The Codex Gigas (English: Giant Book) is the largest extant medieval manuscript in the world. It was created in the early 13th century in the Benedictine monastery of Podlazice in Bohemia, and is now preserved at the National Library of Sweden in Stockholm, where two librarians are needed to lift it. It is also known as the Devil's Bible due to a large illustration of the devil on the inside and the legend surrounding its creation.

The codex is contained in a wooden folder, covered with leather and ornamented with metal. At 92 cm (36.2in.) tall, 50 cm (19.7in.) wide and 22 cm (8.6in.) thick it is the largest known medieval manuscript. It initially contained 320 vellum sheets, though eight of these were subsequently removed. It is unknown who removed the pages or for what purpose but it seems likely that they contained the monastic rules of the Benedictines. The codex weighs nearly 75 kg (165 lbs.) and the vellum is composed of calf skin (or donkey according to some sources) from 160 animals.

The codex was created in the Benedictine monastery of Podlazice near Chrudim, which was destroyed during the 15th century. Records in the codex end in the year 1229. The codex was later pledged to the Cistercians Sedlec monastery and then bought by the Benedictine monastery in Brevnov. From 1477-1593 it was kept in the library of a monastery in Broumov until it was taken to Prague in 1594 to form a part of the collections of Rudolf II.

At the end of the Thirty Years' War in the year 1648, the entire collection was stolen by the Swedish army as plunder. From 1649 to 2007 the manuscript was kept in the Swedish Royal Library in Stockholm. The site of its creation is marked by a maquette in the town museum of Chrast.

On September 24, 2007, after 359 years, Codex Gigas returned to Prague on loan from Sweden until January 2008 (on display previously at the Czech National Library).

The Codex includes the entire Latin Vulgate version of the Bible, except for the books of Acts and Revelation, which are from a pre-Vulgate version. Also included are Isidore of Seville's encyclopedia Etymologiae, Josephus' Antiquities of the Jews, Cosmas of Prague's Chronicle of Bohemia, various tractates (from history, etymology and physiology), a calendar with necrologium, a list of brothers in Podlazice monastery, magic formulae and other local records. The entire document is written in Latin.

The manuscript includes illuminations in red, blue, yellow, green and gold. Capital letters are elaborately illuminated, frequently across the entire page. The codex has a unified look as the nature of the writing is unchanged throughout, showing no signs of age, disease or mood on the part of the scribe. This may have led to the belief that the whole book was written in a very short time.

Page 290, otherwise empty, includes a unique picture of the devil, about 50 cm tall. Several pages before this are written on a blackening vellum and have a very gloomy character, somewhat different from the rest of the codex. The reason for the different coloring is that when vellum is exposed to light it "tans", as vellum is made from animal skins, so over the centuries the pages that were exposed will have a darker color to them.

According to legend the scribe was a monk who broke his monastic vows and was sentenced to be walled up alive. In order to forbear this harsh penalty he promised to create in one single night a book to glorify the monastery forever, including all human knowledge. Near midnight he became sure that he could not complete this task alone, so he sold his soul to the devil for help. The devil completed the manuscript and the monk added the devil's picture out of gratitude for his aid.

Despite this legend the codex was not forbidden by the Inquisition and was studied by many scholars. Many aspects of the legend most probably originated in truth, however due to the large portrait of Satan which would have been unique at the time, it is likely that the legend altered the truth so that the story could be retold in a more interesting way. Anyone from the time who looked at the book would most likely be drawn to the portrait of Satan, thus getting the impression that this was one of the book's focal points, explaining why people would believe that the monk made a pact with the devil. What many would have failed to see was that the page opposite this portrait was what is believed to be a picture of the kingdom of heaven. Now, many believe that double page spread was made to symbolize the fact that good and evil exist side-by-side, and nothing sinister.

What most likely happened is that the monk requested to produce the book in solitude, probably over a period of at least twenty years. Many monks would have used the copying of sacred texts as a method of purging their soul of evil, which could explain the monk's motivation. The part of the legend that says that he was walled up alive as a punishment was probably a misinterpretation of his name, which is believed to be in Latin 'Herman Inclusus' or in English 'Herman the Recluse'. This misinterpretation is understandable as the word 'Inclusus' could refer to either the punishment or voluntary solitude. Codex Gigas