A Tribute to George Harrison 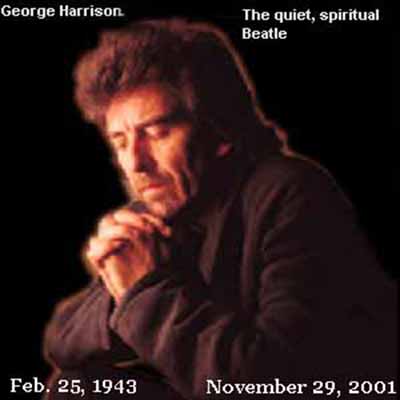 The death of a legend has the same impact on souls as losing another aspect of the collective mind/unconsciousess, a close friend or a relative. It is someone we loved, perhaps listened to for comfort. If the person was famous we associated their work with a part of our timeline here. They become a part of our soul experience. We experienced vicariously.

George Harrison was great musician and singer. He understood the tones, sounds, harmonics, from a spiritual level. He, as with the other Beatles, knew what the public needed to hear and perhaps channeled some of his music. Music is in the soul. Friends who know him, tell me he was an extremely spiritual man.

George was born in Liverpool, England on Feb. 25, 1943 - just one week after I was born February 17 in Brooklyn NY. I believe there is a connection between souls that are born in the same timeline, year.

We were from the old Rock N' Roll days when Ellie would spend her free time in High School hanging out with black friends in the stairwells or empty classrooms, harmonizing to the beat of rock and roll. There were only a handful of black students in Lincoln High School in those days. Good old Lincoln High gave us such music greats as Neil Sedaka and Neil Diamond who lived a few doors down from where I lived on West End Avenue, and with who I share great memories, singing and creating music.

Those were great days for me, the late 50's into the early 60's, the country was not at war, everyone spoke of college and career and success, many felt empowered. Just a few miles away in Erasmus High was another woman just nine months older than I, yet in the same grade who was also destined for fame. Her named was Barbra Streisand.

Along came a group called the Beatles. They were so hot!!!! I remember waiting in a long line with my girlfriends in to see them in Manhattan on the Ed Sullivan show. My friends and I would go to Beatles movies, sit in the balcony and dance in the aisles.

The Beatles had the tones, harmonics, and lyrics to create the energy of that timeline, which continues to this very day.

George Harrison died yesterday of cancer at the age of 58. He had contributed the soul growth of this planetary experience. He will be fondly remembered and will be missed. I will channel him if he comes to me.

As we all move down 'Long and Winding Roads' towards Home, I am certain George will be there as a shining light to guide us once again. 'All You Need Is Love'. 'Here Comes The Sun'. I can see you embracing the light with open arms, as I sit here typing...