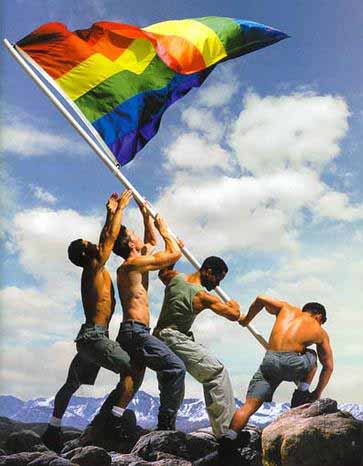 
Differences related to sexual orientation found in the brain, no link to mental illness   Medical Express - March 1, 2021
A large brain imaging study involving researchers at Karolinska Institutet demonstrates that same-sex sexual behavior-related differences in the brain exist. Patterns in the brain that differentiate between men and women were less pronounced in non-heterosexual individuals, and some of the brain differences could be linked to a genetic predisposition for non-heterosexuality.

Along with bisexuality and heterosexuality, homosexuality is one of the three main categories of sexual orientation within the heterosexualĐhomosexual continuum.

Scientists do not know what determines an individual's sexual orientation, but they theorize that it is caused by a complex interplay of genetic, hormonal, and environmental influences, and do not view it as a choice. They favor biologically-based theories, which point to genetic factors, the early uterine environment, both, or the inclusion of genetic and social factors.

Hypotheses for the impact of the post-natal social environment on sexual orientation, however, are weak, especially for males. There is no substantive evidence which suggests parenting or early childhood experiences play a role with regard to sexual orientation.While some people believe that homosexual activity is unnatural, scientific research has shown that homosexuality is a normal and natural variation in human sexuality and is not in and of itself a source of negative psychological effects. There is insufficient evidence to support the use of psychological interventions to change sexual orientation.

The most common terms for homosexual people are lesbian for females and gay for males, but gay also commonly refers to both homosexual females and males. The percentage of people who are gay or lesbian and the proportion of people who are in same-sex romantic relationships or have had same-sex sexual experiences are difficult for researchers to estimate reliably for a variety of reasons, including many gay and lesbian people not openly identifying as such due to prejudice or discrimination such as homophobia and heterosexism. Homosexual behavior has also been documented in many non-human animal species.

Many gay and lesbian people are in committed same-sex relationships, though only in the 2010s have census forms and political conditions facilitated their visibility and enumeration. These relationships are equivalent to heterosexual relationships in essential psychological respects.Homosexual relationships and acts have been admired, as well as condemned, throughout recorded history, depending on the form they took and the culture in which they occurred.

Since the end of the 19th century, there has been a global movement towards freedom and equality for gay people, including the introduction of anti-bullying legislation to protect gay children at school, legislation ensuring non-discrimination, equal ability to serve in the military, equal access to health care, equal ability to adopt and parent, and the establishment of marriage equality. Read more...