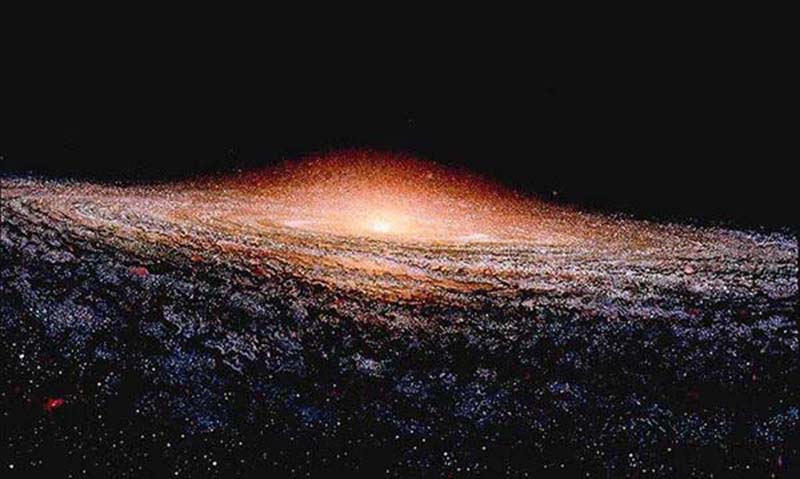 A galaxy is a gravitationally bound system of stars, stellar remnants, interstellar gas, dust, and dark matter literally meaning "milky", a reference to the Milky Way. Galaxies range in size from dwarfs with just a few billion stars to giants with one hundred trillion stars each orbiting its galaxy's center of mass.

Galaxies are categorized according to their visual morphology as elliptical, spiral and irregular. Many galaxies are thought to have black holes at their active centers. The Milky Way's central black hole, known as Sagittarius A*, has a mass four million times greater than the Sun.

As of March 2016, GN-z11 is the oldest and most distant observed galaxy with a co-moving distance of 32 billion light-years from Earth, and observed as it existed just 400 million years after the Big Bang. Previously, as of July 2015, EGSY8p7 was the most distant known galaxy, estimated to have a light travel distance of 13.2 billion light-years away. Approximately 200 billion or, more recently, at least 2 trillion galaxies exist in the observable universe.

Most of the galaxies are 1,000 to 100,000 parsecs in diameter and usually separated by distances on the order of millions of parsecs (or megaparsecs). The space between galaxies is filled with a tenuous gas having an average density of less than one atom per cubic meter. The majority of galaxies are gravitationally organized into associations known as galaxy groups, clusters, and superclusters. At the largest scale, these associations are generally arranged into sheets and filaments surrounded by immense voids. The largest structure of galaxies yet recognised is a cluster of superclusters, that has been named Laniakea. Read more


Antennae Galaxies are a pair of interacting galaxies in the constellation Corvus. 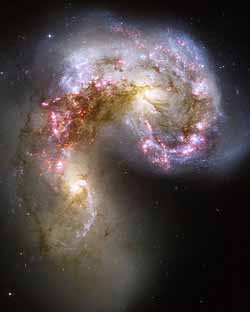 Dark Galaxies contain very few, or no stars. Held together by dark matter, they may also contain gas and dust. No dark galaxy with a black hole as a center has yet been discovered. 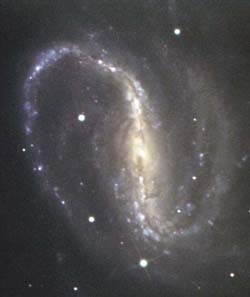 Dwarf Galaxy is a small galaxy composed of up to several billion stars, a small number compared to our own Milky Way's 200-400 billion stars. 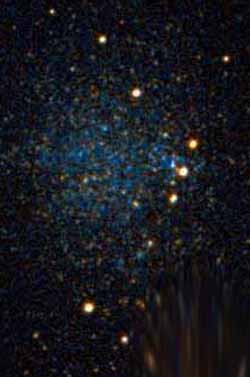 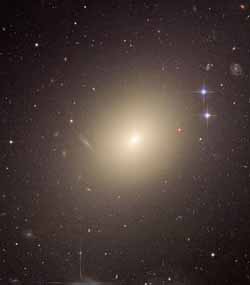 Interacting Galaxy or Colliding Galaxies are the result of one galaxy's gravity disturbing another galaxy. 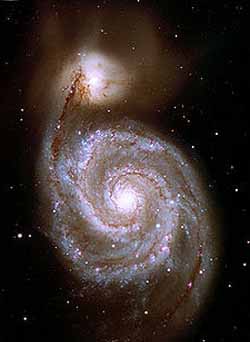 Irregular Galaxies do not have a regular shape. 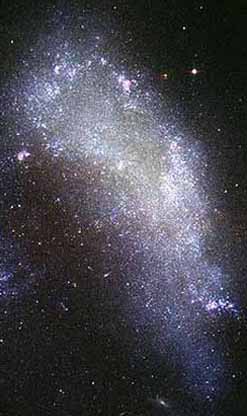 Lenticular Galaxies are intermediate between an elliptical galaxy and a spiral galaxy in galaxy morphological classification schemes. 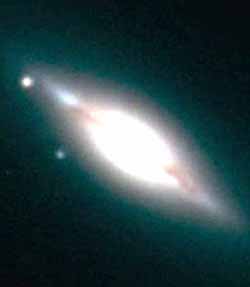 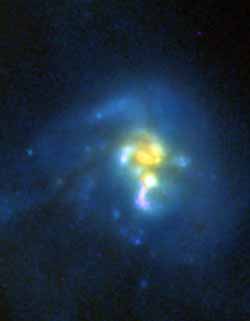 Peculiar Galaxies have irregular or unusual shapes typically resulting from disruption by the gravitational pull of neighboring galaxies. 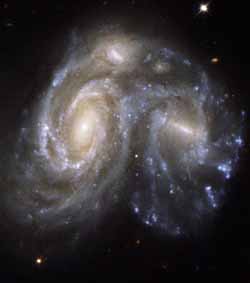 Ring Galaxies have a ring-like appearance. The ring consists of massive, relatively young blue stars, which are extremely bright. 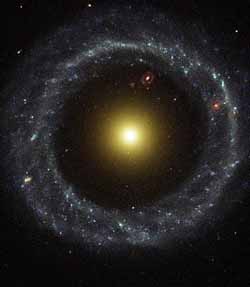 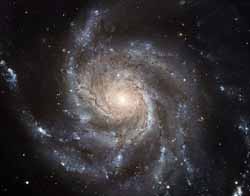 The Whirlpool Galaxy is an interacting grand-designspiral galaxy located at a distance of approximately 23 million light-years in the constellation Canes Venatici. 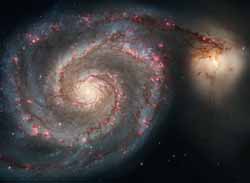 Dark Matter appears to account for about 90% of the mass of most galaxies. Observational data suggests that supermassive black holes may exist at the center of many, if not all, galaxies. They are proposed to be the primary cause of active galactic nuclei found at the core of some galaxies. The Milky Way Galaxy appears to harbor at least one such object within its nucleus. 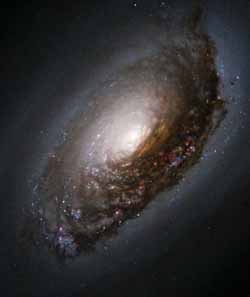 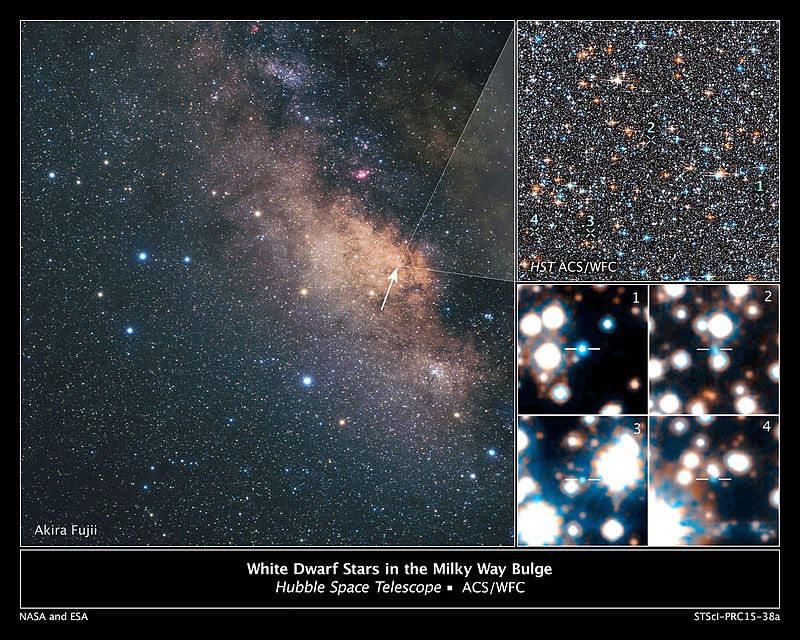 A view of the night sky near Sagittarius, enhanced to show better contrast and
detail in the dust lanes. The principal stars in Sagittarius are indicated in red. 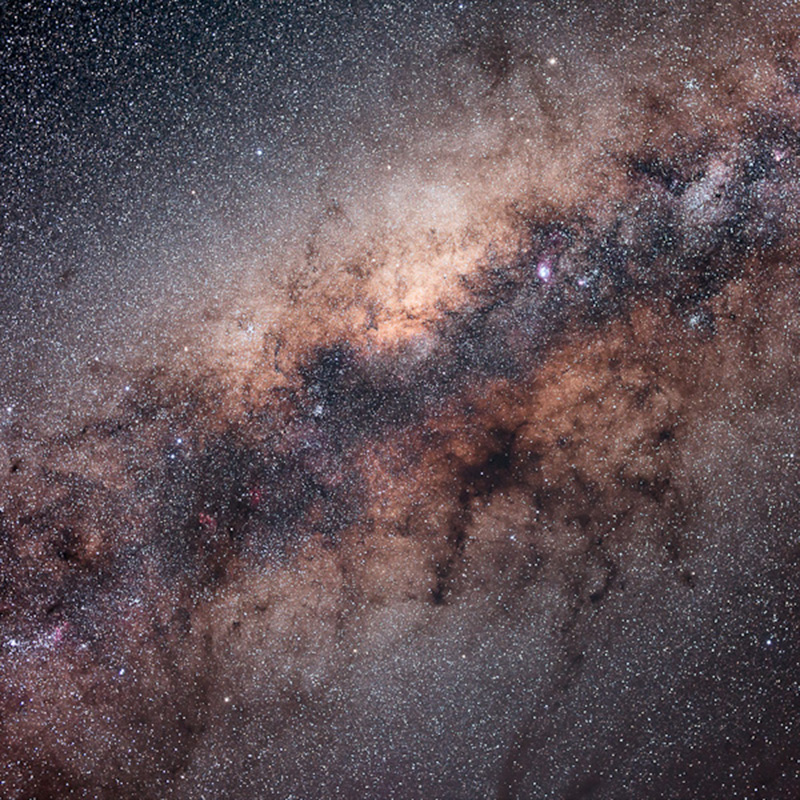 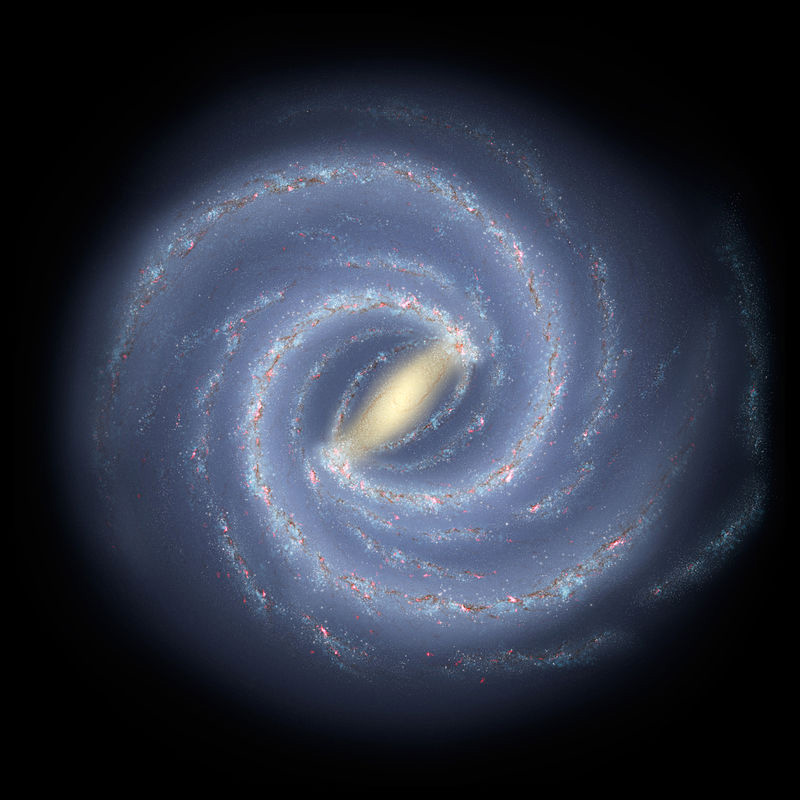 Scientists at the Max Planck Institute for Extraterrestrial Physics in Germany using Chilean telescopes have confirmed the existence of a supermassive black hole at the Galactic Center, on the order of 4.3 million solar masses.

A complex astronomical radio source Sagittarius A appears to be located almost exactly at the Galactic Center (approx. 18 hrs, -29 deg), and contains an intense compact radio source, Sagittarius A*, which coincides with a supermassive black hole at the center of the Milky Way. Accretion of gas onto the black hole, probably involving a disk around it, would release energy to power the radio source, itself much larger than the black hole. The latter is too small to see with present instruments. Read more


Black Hole at the galactic center 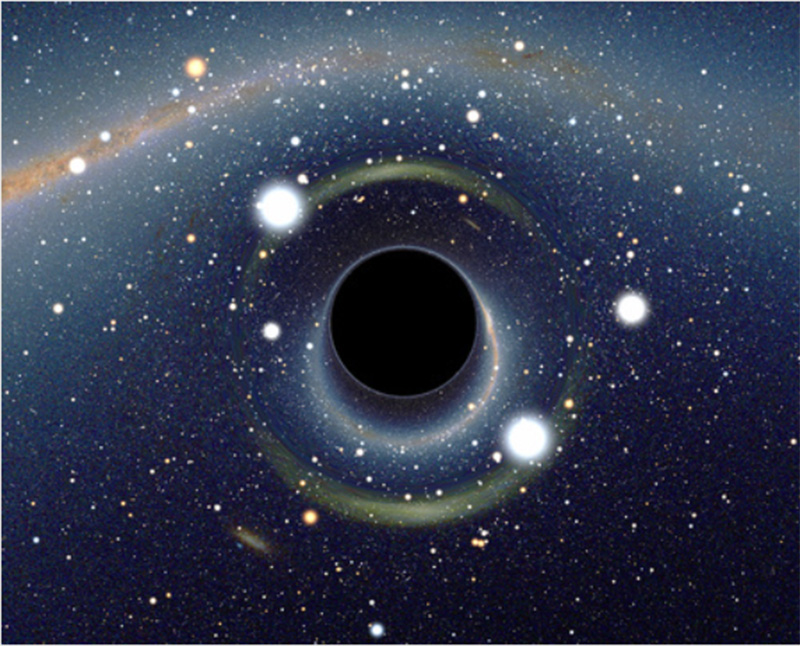 Astronomers found the first real evidence for a supermassive black hole in our Galaxy in 1974 when they detected strong radio emissions coming from a spot they called Sagittarius A*. These radio waves are a kind of Ňsmoking gun,Ó hinting there is a disk of material orbiting around a massive, unseen object. The black hole at Sagittarius A* seems to have a mass of around 4 million times that of the Sun. But black holes are so dense that the size of the corresponding black hole would only be about about 20 times the size of the Sun. That is far too small for us to see from Earth, even with our most powerful telescopes.

Since 1995, astronomers have been able to use infrared telescopes to observe individual stars in the Galactic Center right in the Sagittarius A* region. By repeating the observations year after year, the motions of these stars can be mapped out.

Normally stars move very slowly over time, but these stars are whipping around at such astonishing speeds we can see their positions shift year by year. They trace out the elliptical orbits we would expect to see if they were orbiting a massive, unseen object. One of the stars, known as S0-102, completed a full 409 billion-mile orbit in a mere 11.5 years, traveling at over 3000 miles per second.

The shapes of the orbits of these stars confirms they are all orbiting a single small object, and the timing of the orbits allows astronomers to calculate that the object's mass is 4 million times greater than that of our Sun. To date, a black hole is the only theory of physics that can explain that observation. It almost sounds like astronomers have done the impossible. Using infrared light, they have measured the mass of a black hole that, by definition, cannot be seen at any wavelength of light at all.