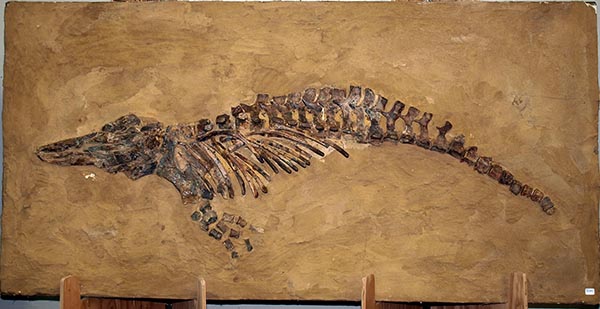 All cetaceans, including whales, dolphins and porpoises, are descendants of land-dwelling mammals of the Artiodactyl order (even-toed ungulates). Both are related to the Indohyus, an extinct semi-aquatic deer-like ungulate, from which they split around 54 million years ago. These primitive cetaceans first took to the sea about 50 million years ago and became fully aquatic about 5-10 million years later. Their features became adapted for living the marine environment. Major anatomical changes include streamlining of the body, the migration of the nasal openings towards the top of the cranium, the shrinking and eventual disappearance of the hind limbs, the modification of the forelimbs into flippers, and the growth of flukes on the tail. Read more ...

Ancient whales walked on four legs and moved like giant otters   CNN - April 4, 2019
The whales we know today look nothing like they did millions of years ago. Instead, cetaceans, the group including today's whales and dolphins, evolved 50 million years ago from small four-legged animals with hooves. Rather than being one of the largest creatures on Earth, as they are now, they came from creatures that were the size of an average dog.


Ancient, four-legged whale with otter-like features found along the coast of Peru   PhysOrg - April 4, 2019
Cetaceans, the group including whales and dolphins, originated in south Asia more than 50 million years ago from a small, four-legged, hoofed ancestor. Now, researchers reporting the discovery of an ancient four-legged whale - found in 42.6-million-year-old marine sediments along the coast of Peru - have new insight into whales' evolution and their dispersal to other parts of the world.


Extinct early whales listened like their relatives on land, fossil evidence shows   PhysOrg - June 8, 2017
Researchers reporting in Current Biology on June 8 have fossil evidence from extinct early whale species to suggest that those differences in hearing arose only after whales evolved into the fully aquatic animals we know today. That's based on their findings that whales known as protocetes, which spent time both in water and on land, appear to have hearing more like their terrestrial, even-toed ungulate relatives, including pigs, hippos, and camels.


Fossilized tooth of gigantic 'killer' whale found in Australia   PhysOrg - April 23, 2016
A huge, five-million-year-old whale tooth has been discovered on an Australian beach, providing the first evidence of the now extinct killer sperm whale outside the Americas. The 30-centimetre-long (12-inch) fossilized tooth, which is larger than that of a Tyrannosaurus rex, was found by a fossil enthusiast at Beaumaris Bay near Melbourne in February.


Whale fossil, 17 million years old, provides first exact date for East Africa's puzzling uplift   Science Daily - March 17, 2015
A 17 million-year-old whale fossil provides the first exact date for East Africa's puzzling tectonic uplift, says paleontologists who rediscovered the fossil. The uplift and aridification associated with the Great Rift Valley of East Africa caused changes in vegetation and have been considered a driver of human evolution. Understanding how, when, and under what conditions the fossil whale was stranded far inland in Kenya now sheds light on the uplift's timing and starting elevation.


Study: Ancient whale swam hundreds of miles up African river   PhysOrg - March 17, 2015
A 22-foot beaked whale that apparently took a wrong turn up an African river about 17 million years ago may offer clues to the climate-change forces that shaped human evolution. Lost for more than 30 years, the fossilized beak and jaw bone help determine that the East African Plateau probably began rising no earlier than 17 million years ago.


Story of 4.5-Million-Year-Old Whale Found in Spain   Science Daily - December 23, 2009
The researchers have described the fossil remains discovered in Bonares, Huelva, at an altitude of 80 metres above sea level and 24 kilometres from the sea, and have studied the main taxonomic characteristics and associated fauna. The team also created a paleoenvironmental model to explain how the skeleton -- which is incomplete apart from some pieces such as its three-metre-long hemimandibular jaw bones -- was deposited. The results show that these remains came from a "juvenile whale that died and became buried on the sea floor, at a depth of around 30-50 metres, and were subject to intense activity by invertebrate and vertebrate scavengers (as can be seen from the presence of numerous shark teeth associated with the bones)," says Mu–iz. Based on the remains studied, it is hard for the researchers to say whether the cause of death was illness, old age, or attack by a larger predator.


Ancient whale sucked mud for food   BBC - December 26, 2009
> An ancient "dwarf" whale appears to have fed by sucking small animals out of the seafloor mud with its short snout and tongue, experts say. Researchers say the 25 million-year-old fossil is related to today's blue whales - the largest animals on Earth. The ancient animal's mud slurping may have been a precursor to the filter feeding seen in modern baleen whales. These whales strain huge quantities of tiny marine animals through specialized "combs" which take the place of teeth.


Australia: Whale fossil sports fierce teeth   BBC - August 16, 2006
Paleontologists have discovered a bizarre whale fossil in Australia with a set of fearsome teeth. The specimen has surprised scientists because it belongs to the group known as baleen whales. Modern day baleen whales are all placid plankton-eaters, but the new fossil shows the group were not always the ocean's gentle giants. The small, large-eyed baleen whale used a fully developed set of teeth to hunt its prey.


Rock art hints at whaling origins   BBC - April 20, 2004
Stone Age people may have started hunting whales as early as 6,000 BC, new evidence from South Korea suggests. Analysis of rock carvings at Bangu-Dae archaeological site in Ulsan in the southeast of the country revealed more than 46 depictions of large whales. They also show evidence that humans used harpoons, floats and lines to catch their prey, which included sperm whales, right whales and humpbacks. The rock engravings, or petroglyphs, seem to have been made at a range of different times between 6,000 and 1,000 BC. At nearby occupation sites dating to between 5,000 and 1,500 BC, archaeologists have unearthed large quantities of cetacean bones - a sure sign that whales were an important food source for populations in the area.