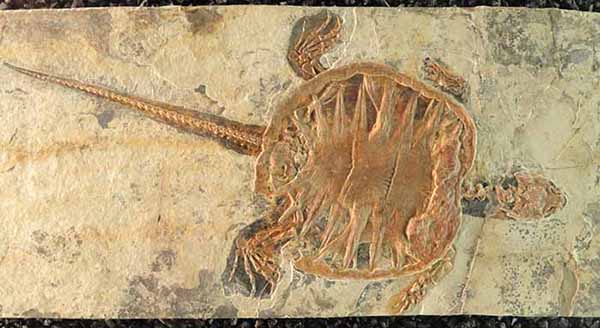 Turtle fossils of hatchling and nestling size have been documented in the scientific literature. Paleontologists from North Carolina State University have found the fossilized remains of the world's largest turtle in a coal mine in Colombia. The specimen named as Carbonemys cofrinii is around 60 million years old and nearly 8 ft long.

On a few rare occasions, paleontologists have succeeded in unearthing large numbers of Jurassic or Cretaceous turtle skeletons accumulated in a single area (the Nemegt Formation in Mongolia, the Turtle Graveyard in North Dakota, or the Black Mountain Turtle Layer in Wyoming). The most spectacular find of this kind to date occurred in 2009 in Shanshan County in Xinjiang, where over a thousand ancient freshwater turtles apparently died after the last water hole in an area dried out during a major drought. Read more ... 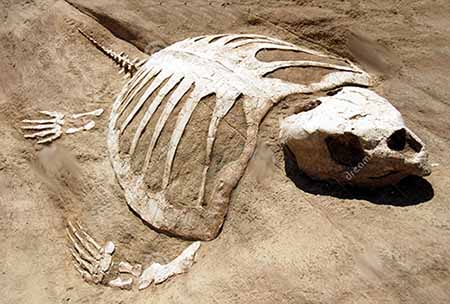 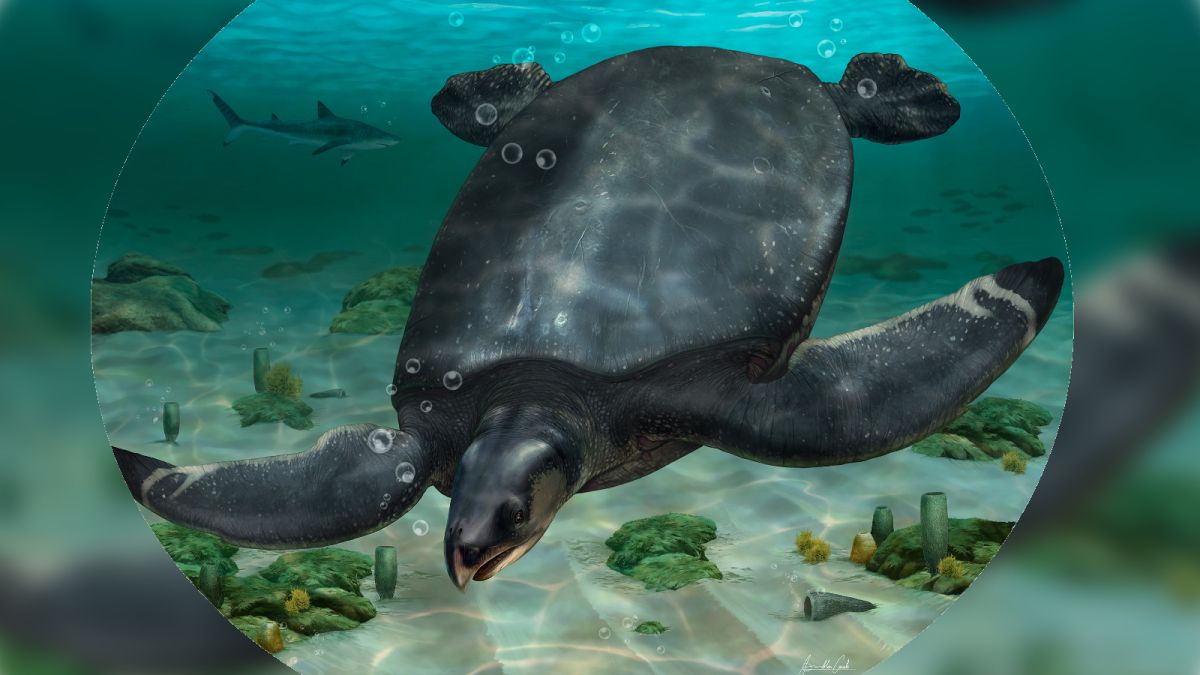 Researchers in Spain have unearthed a never-before-seen species of ancient marine turtle, the largest of its kind ever uncovered in Europe.


Tortoise and her egg found in new Pompeii excavations   BBC - June 26, 2022
When Mount Vesuvius erupted nearly 2,000 years ago Pompeii's ancient residents were frozen in place by ash. So too it turns out were the city's flora and fauna - including a pregnant tortoise with her egg. Archaeologists found the reptile's remains buried under ash and rock where it had laid undiscovered since 79AD. The tortoise was sheltering beneath an already-destroyed building when volcanic disaster struck. Archaeologists found the remains while excavating an area of the city that its ancient inhabitants had been rebuilding after an earlier earthquake devastated Pompeii in 62AD. Around 2,000 years ago the 14cm (5.5in) tortoise had burrowed into a tiny underground lair beneath a shop destroyed in that earlier quake. Experts say the fact it was found with an egg suggests it was killed while trying to find somewhere peaceful to lay its offspring.


Fossil turtle didn't have a shell yet, but had the first toothless turtle beak   Science Daily - August 22, 2018
There are a couple of key features that make a turtle a turtle: its shell, for one, but also its toothless beak. A newly-discovered fossil turtle that lived 228 million years ago is shedding light on how modern turtles developed these traits. It had a beak, but while its body was Frisbee-shaped, its wide ribs hadn't grown to form a shell like we see in turtles today.


Paleontologist Discovers New Fossil Turtle Species in Tennessee   Sci-News - February 27, 2018
Named Trachemys haugrudi, the ancient reptile was a fairly small turtle, not more than 10 inches (25 cm) in total shell length, smaller than the extant red-eared slider turtle (Trachemys scripta elegans). It lived in what is now eastern Tennessee around the Miocene-Pliocene boundary, about 5.5 million years ago.


Researchers discover real reason why turtles have shells   PhysOrg - July 15, 2016
The earliest beginnings of the turtle shell was not for protection but rather for digging underground to escape the harsh South African environment where these early proto turtles lived.


World's Oldest Sea Turtle Fossil Discovered   Live Science - September 18, 2015
The world's oldest sea turtle fossil shows the ancient animal swam the oceans at least 120 million years ago, when dinosaurs still roamed the Earth, according to a recent analysis. The now-extinct Desmatochelys padillai turtle skeleton was found in Villa de Leyva, Colombia, and is 25 million years older than the Santanachelys gaffneyi turtle from Brazil that previously held the record for the world's oldest sea turtle fossil. The D. padillai specimen was dug up by hobby paleontologist Mary Luz Parra and her two brothers in 2007. However, it wasn't until Edwin Cadena, a researcher at the Senckenberg Research Institute and Natural History Museum in Germany, and James Parham, an assistant professor of geological sciences at California State University, Fullerton, inspected it that the fossil was determined to be the oldest sea turtle specimen in the world, dating back to the Cretaceous period, between 145.5 million and 65.5 million years ago.


Earliest-Known Turtle Had No Shell and Plenty of Teeth   NBC - September 2, 2015
It was a creature that one scientist said resembled a strange, gluttonous lizard that swallowed a small Frisbee. But a sophisticated skull analysis showed that this reptile called Eunotosaurus africanus that lived in southern Africa 260 million years ago is actually the earliest-known turtle, even though it had no shell.


Fossil Discovery Could Be Missing Link In Mystery Of Turtle Shell Evolution   Huffington Post - June 26, 2015
An ancient reptile that doesn't have a shell is an important link in the evolutionary history of the turtle, according to new research. The fossilized remains of the newly described creature, named Pappochelys rosinae, were found in the south German state of Baden-Wźrttemberg and are believed to be about 240 million years old. The reptile had a small skull with a short, pointed snout and was about eight inches in length at full size, with a long tail.


Turtles and dinosaurs: Scientists solve reptile mysteries with landmark study on the evolution of turtles   Science Daily - November 24, 2014
A team of scientists has reconstructed a detailed 'tree of life' for turtles. Next generation sequencing technologies have generated unprecedented amounts of genetic information for a thrilling new look at turtles' evolutionary history. Scientists place turtles in the newly named group 'Archelosauria' with their closest relatives: birds, crocodiles, and dinosaurs.


Monster turtle fossils re-united   BBC - March 24, 2014
Two halves of a fossil bone found more 160 years apart have finally allowed scientists to scale one of the biggest sea turtles that ever lived. Atlantochelys mortoni was originally described from a broken arm bone, or humerus, found in the 1840s in New Jersey. The fossil fragments are a perfect match, and indicate A. mortoni must have been 3m from tip to tail.


Giant, Round Prehistoric Turtle Discovered   Live Science - July 13, 2012
A newfound giant turtle that lived 60 million years ago in what is now northwestern South America would have been more than a mouthful for a neighboring predator, the world's largest snake Titanoboa. The turtle's huge carapace, or shell, was nearly circular, like a tire, the researchers said.


Turtles fossilized in sex embrace   BBC - June 20, 2012
Turtles killed as they were having sex and then fossilized in position have been described by scientists. The remains of the 47-million-year old animals were unearthed in the famous Messel Pit near Darmstadt, Germany. They were found as male-female pairs. In two cases, the males even had their tails tucked under their partners' as would be expected from the coital position.


Researchers reveal ancient giant turtle fossil   PhysOrg - May 17, 2012
The turtle in question is Carbonemys cofrinii, which means "coal turtle," and is part of a group of side-necked turtles known as pelomedusoides. The fossil was named Carbonemys because it was discovered in 2005 in a coal mine that was part of northern Colombia's Cerrejon formation. The specimen's skull measures 24 centimeters, roughly the size of a regulation NFL football. The shell which was recovered nearby - and is believed to belong to the same species - measures 172 centimeters, or about 5 feet 7 inches, long. That's the same height as Edwin Cadena, the NC State doctoral student who discovered the fossil.


New study shows how giant tortoises, alligators thrived in High Arctic 50 million years ago   PhysOrg - August 24, 2010
A new study of the High Arctic climate roughly 50 million years ago led by the University of Colorado at Boulder helps to explain how ancient alligators and giant tortoises were able to thrive on Ellesmere Island well above the Arctic Circle, even as they endured six months of darkness each year.


Tropical Turtle Fossil Found in Arctic   Live Science - February 1, 2009
The last place scientists expected to find the fossil of a freshwater, tropical turtle was in the Arctic. But they did. The discovery, detailed today in the journal Geology, suggests animals migrated from Asia to North America not around Alaska, as once thought, but directly across a freshwater sea floating atop the warm, salty Arctic Ocean. It also provides additional evidence that a rapid influx of carbon dioxide some 90 million years ago was the likely cause of a super-greenhouse effect that created extraordinary heat in the polar region. Turtles may be slow, but they're known to migrate long distances. Recent satellite tracking found a leatherback turtle traveled 12,774 miles (20,558 kilometers) from Indonesia to Oregon, one of the longest recorded migrations of any vertebrate animal.


Canada: Fossil of Ancient Pregnant Turtle Discovered Live Science - August 27, 2008
A turtle that toddled alongside the dinosaurs died just days before laying a clutch of eggs. Now, about 75 million years later, paleontologists are announcing their find of the fossilized mother-to-be and the eggs tucked inside her body.


Brazil: Reptile fossil is 'early turtle' BBC - November 16, 2005
A fossil reptile discovered in Brazil may be the oldest known creature that resembles a modern turtle. The 120-million-year-old find is linked to present-day representatives by its heavily webbed, paddle-shaped foot - an adaptation to life in the sea. Soft tissue has been preserved on the specimen, allowing scientists to confirm the webbing rather than infer it from the length of the foot bones. Representatives of the turtle lineage are known from the fossil record as far back as 200 million years. But these examples look more like tortoises, suggesting they were still very much adapted to life on land. The latest find has front feet shaped like paddles, much like modern turtles. 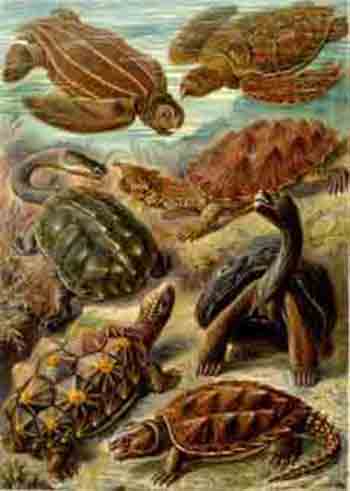