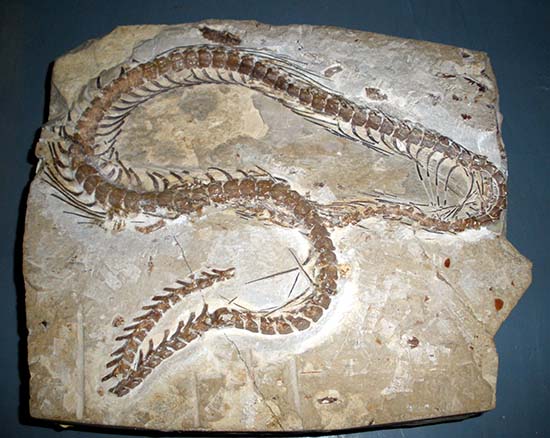 The fossil record of snakes is relatively poor because snake skeletons are typically small and fragile making fossilization uncommon. Fossils readily identifiable as snakes (though often retaining hind limbs) first appear in the fossil record during the Cretaceous period.

The earliest known snake fossils come from sites in Utah and Algeria, represented by the genera Coniophis and Lapparentophis, respectively. These fossil sites have been tentatively dated to the Albian or Cenomanian age of the late Cretaceous, between 112 and 94 Ma ago. However, an even greater age has been suggested for one of the Algerian sites, which may be as old as the Aptian, 125 to 112 Ma ago.

Modern snakes greatly diversified during the Paleocene. This occurred alongside the adaptive radiation of mammals, following the extinction of (non-avian) dinosaurs. The colubrids, one of the more common snake groups, became particularly diverse due to preying on rodents, an especially successful mammal group. Read more ... 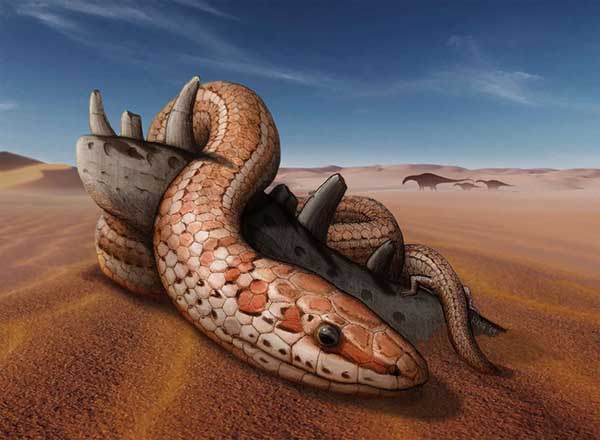 On very rare occasions, an exceptional fossil is unearthed that provides an extraordinary glimpse into the evolution of a group of organisms. This time, it is the beautifully preserved skull of an ancient snake with rear limbs, Najash rionegrina. This and other new fossils help answer long-standing questions on the origins of snakes, such as how they lost their limbs and evolved their highly specialized skulls.


New fossils shed light on how snakes got their bite and lost their legs
The evolution of the snake body has captivated researchers for a long time - representing one of the most dramatic examples of the vertebrate body's ability to adapt - but a limited fossil record has obscured our understanding of their early evolution until now.


Baby snake 'frozen in time' gives insight into lost world   BBC - July 19, 2018
The fossil of a baby snake has been discovered entombed inside amber. The creature has been frozen in time for 99 million years. The snake lived in what is now Myanmar, during the age of the dinosaurs. Scientists say the snake fossil is unbelievably rare.

Four-legged snake ancestor 'dug burrows'   BBC - July 24, 2015
A 113-million-year-old fossil from Brazil is the first four-legged snake that scientists have ever seen. Several other fossil snakes have been found with hind limbs, but the new find is estimated to be a direct ancestor of modern snakes.


X-rays Reveal Ancient Snake's Hidden Leg   Live Science - February 8, 2011
A new look at a 95-million-year-old fossilized snake reveals two tiny leg bones attached to the slithery creature's pelvis. A three-dimensional reconstruction of the bones could help researchers understand how snakes evolved to lose their legs. The fossil, found in Lebanon, is from an era when snakes had not yet completely lost the hind limbs left by their lizard ancestors. A much-debated question among paleontologists is whether these leggy ancestors were ocean-living swimmers or land-dwelling burrowing lizards. 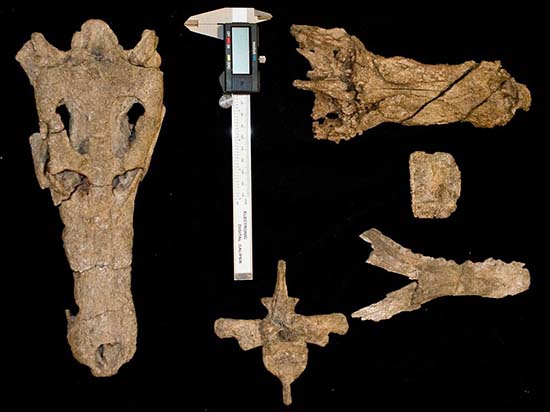 A new species of prehistoric croc has been unearthed in Colombia - and the ancient reptile was likely prey for the largest known snake ever to have slithered the Earth, a new study says.


Fossil hunters discover largest snakes ever to have slithered on earth   Guardian - February 5, 2009
Fossil hunters working in an open-pit coal mine in Colombia have unearthed the remains of several giant prehistoric snakes, thought to be the largest ever to have slithered on earth. The boa constrictor-like beasts, aptly named Titanoboas, weighed more than one and a quarter tons and measured at least 13m long from nose to tip. At their widest, the snakes would have come up to the waist of an adult human. The partial skeletons of eight individuals were uncovered at the site, alongside the fossilized remains of what may have once have been the creatures' dinner: a 2m-long giant turtle and an ancient ancestor of the modern crocodile. The skeletons were discovered when Carlos Jaramillo, a paleobotanist at the Smithsonian Tropical Research Institute in Panama, was invited to Cerrojon in northern Colombia, home to one of the world's largest open-pit mines, to date the rock formations there. 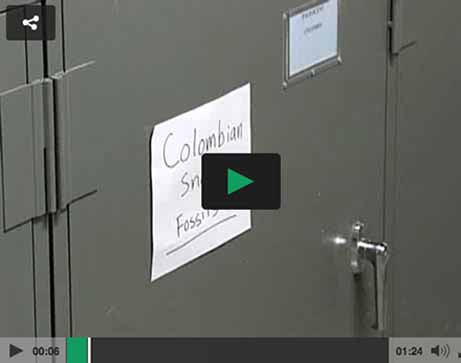 
Largest snake 'as long as a bus'   BBC - February 5, 2009
The discovery of fossilized remains belonging to the world's largest snake has been reported in Nature journal. Titanoboa was 13m (42ft) long - about the length of a bus - and lived in the rainforest of north-east Colombia 58-60 million years ago. The snake was so wide it would have reached up to a person's hips, say researchers, who have estimated that it weighed more than a tonne. Green anacondas - the world's heaviest snakes - reach a mere 250kg (550 lbs). Reticulated pythons - the world's longest snakes - can reach up to 10m (32ft).

Ancient serpent shows its 2 leg   BBC - April 10, 2008
What was lost tens of millions of years ago is now found. A fossil animal locked in Lebanese limestone has been shown to be an extremely precious discovery - a snake with two legs. Scientists have only a handful of specimens that illustrate the evolutionary narrative that goes from ancient lizard to limbless modern serpent.


Snakes Evolved on Land, New Fossil Find Suggests   National Geographic - April 19, 2006
An ancient snake with hips connected to its spine might be proof that slithery serpents originated on land, not in the water, a new fossil find reveals. The fossil snakewhich has a primitive pelvis and robust, functional legs outside the ribcage dates from about 90 million years ago. The species, named Najash rionegrina, is the earliest limbed snake ever found in a fully terrestrial deposit.