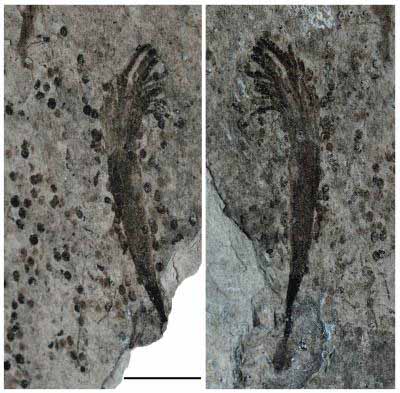 Seaweed is a macroscopic, multicellular, marine algae that lives near the seabed (benthic). The term includes some members of the red, brown and green algae. Seaweeds can also be classified by use (as food, medicine, fertilizer, filtration, industrial, etc.). The study of seaweed is known as Phycology. Read more ...


Plant or Animal? Mysterious Fossils Defy Classification   Live Science - February 16, 2011
One of the approximately 600-million-year-old fossils unearthed in China this organism was probably seaweed. It has a root-like holdfast to secure it to the sea floor, a conical stem and a crown of ribbon-like structures. Strange fossils, including some that could be predecessors to modern animals, found in China shed new light on the evolution of large, complex organisms, and indicate that they may have diversified earlier than thought.


Oldest fossils of large seaweeds, possible animals tell story about oxygen in an ancient ocean   PhysOrg - February 16, 2011
Almost 600 million years ago, before the rampant evolution of diverse life forms known as the Cambrian explosion, a community of seaweeds and worm-like animals lived in a quiet deep-water niche under the sea near what is now Lantian, a small village in Anhui Province of South China. Then they simply died, leaving some 3,000 nearly pristine fossils preserved between beds of black shale deposited in oxygen-free waters.