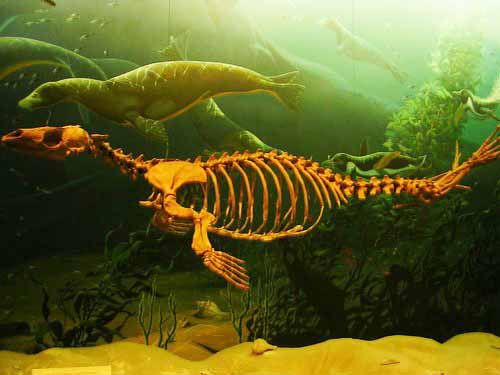 One popular hypothesis suggested that are diphyletic (descended from two ancestral lines), with walruses and otariids sharing a recent common ancestor with bears and phocids sharing one with Musteloidea. However, morphological and molecular evidence support a monophyletic origin. Nevertheless there is some dispute as to whether pinnipeds are more closely related to bears or musteloids, as some studies support the former theory and others the latter. Pinnipeds split from other caniforms 50 million years ago (mya) during the Eocene.

Their evolutionary link to terrestrial mammals was unknown until the 2007 discovery of Puijila darwini in early Miocene deposits in Nunavut, Canada. Like a modern otter, Puijila had a long tail, short limbs and webbed feet instead of flippers. However, its limbs and shoulders were more robust and Puijila likely had been a quadrupedal swimmer-retaining a form of aquatic locomotion that give rise to the major swimming types employed by modern pinnipeds. The researchers who found Puijila placed it in a clade with Potamotherium (traditionally considered a mustelid) and Enaliarctos. Of the three, Puijila was the least specialized for aquatic life. The discovery of Puijila in a lake deposit suggests that pinniped evolution went through a freshwater transitional phase. Read more ...


'Missing link' fossil seal walked   BBC - April 22, 2009
It may look like a cross between a seal and an otter; but an Arctic fossil could, scientists say, hold the secret of seal evolution in its feet. A skeleton unearthed in northern Canada shows a creature with feet that were probably webbed, but were not flippers. Writing in the journal Nature, scientists suggest the 23 million-year-old proto-seal would have walked on land and swum in fresh water.